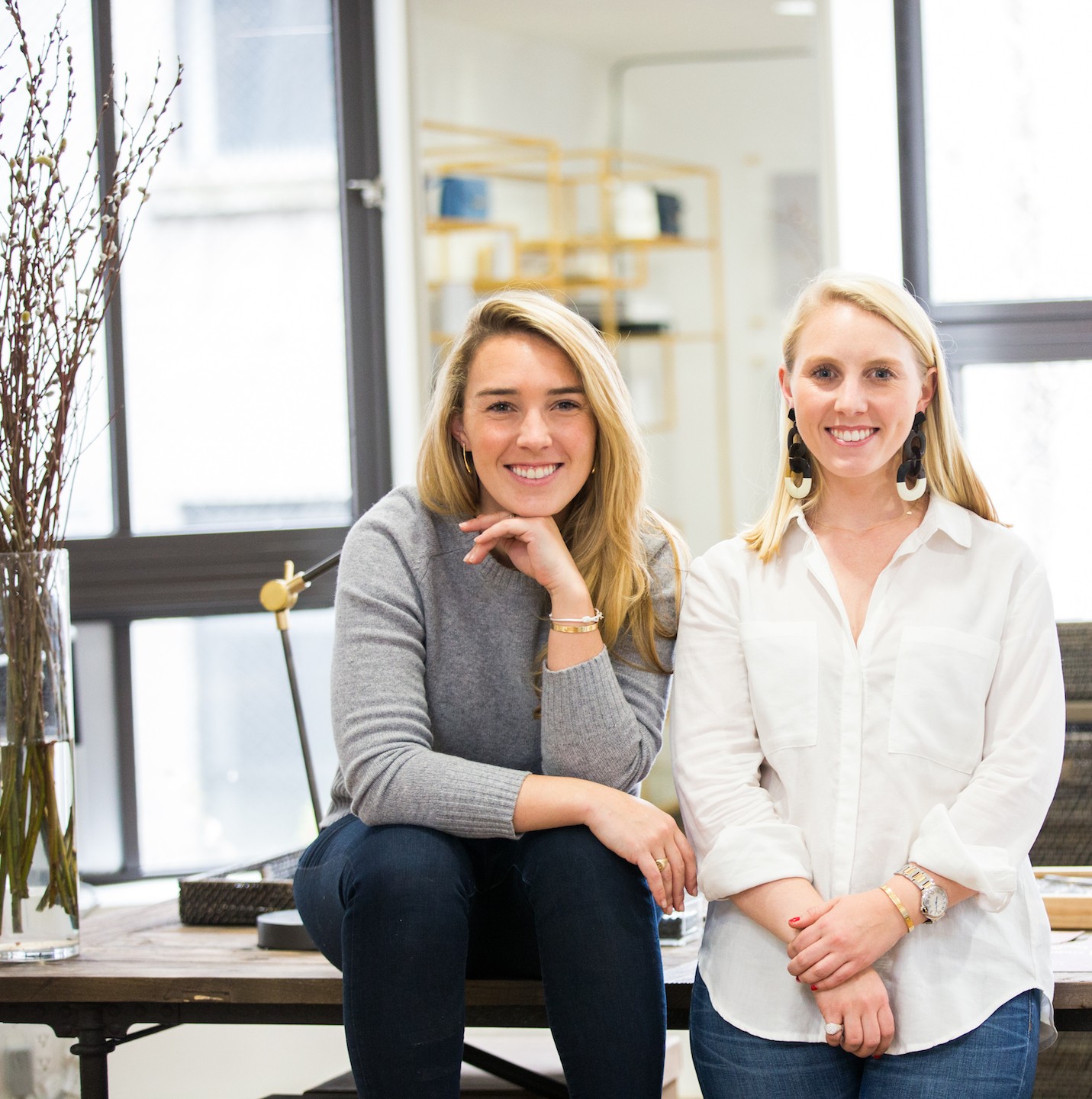 When I walked into the Neely & Chloe Tribeca showroom, I instantly wanted to move in. I mean, who wouldn’t want to put down roots in a light-filled, colorful studio surrounded by adorable accessories? Winnie — Neely’s 2-year-old springer spaniel — greeted me at the door, and the sisters behind the eponymous brand showed me around.

The space — on the fourth floor of an unassuming building on Franklin Street — was the first of many Neely and Chloe Burch saw when they were looking for an office for their retail brand. They returned, however, because they realized it could be more than just a workspace. They were drawn to the alcoves that allow them to separate their desks from the workshop and showroom. Plus, they love its bare bones qualities, such as the hardwood floors and painted brick. They’ve been in the space for four months, and welcome visitors by appointment, for walk-ins and for Thursday night happy hours.

The Burch sisters have been in business officially for 10 months now, and they’re already garnering attention for their high-quality leather goods at accessible prices (everything is under $300). And with a new fall line launching next month, their path to dominating the mid-level contemporary accessories industry continues.

At just 26 and 25, the sisters have fashion in their blood. Their dad is Robert Burch, who co-founded Eagle’s Eye clothing with brother J. Christopher Burch (whose ex-wife is Tory Burch).

It should come as no surprise, then, that shortly after graduating Washington & Lee University in 2013, Neely decided to follow in her family’s footsteps. She began a road tour in an airstream, bringing a curated collection of clothing and accessories from popular brands like Joie and Soludos to remote college towns that don’t have many shopping options.

Throughout her nearly two-year trip, Neely made 40-50 stops up and down the East Coast. She got to know what young women across the country need and want, slowly building the foundation of a brand that serves young professionals who seek high fashion without the high price tag. When Chloe realized what her sister was brewing up, she jumped aboard, bringing merchandising expertise to the table.

In September 2016, the sisters launched their brand of high-quality wardrobe accessories — like totes with removable pouches that doubles as a clutches, and monogrammable cosmetic bags — that are as functional as they are fashionable. In August, they’ll launch their new line, featuring tried and true Neely & Chloe favorites re-mastered in new textiles and colors like olive green and rust. Plus, there will be plenty of statement pieces, like an adorable bucket bag featuring horse hair.

We sat down with the ladies to discuss everything from their last Google search to their upcoming fall collection. 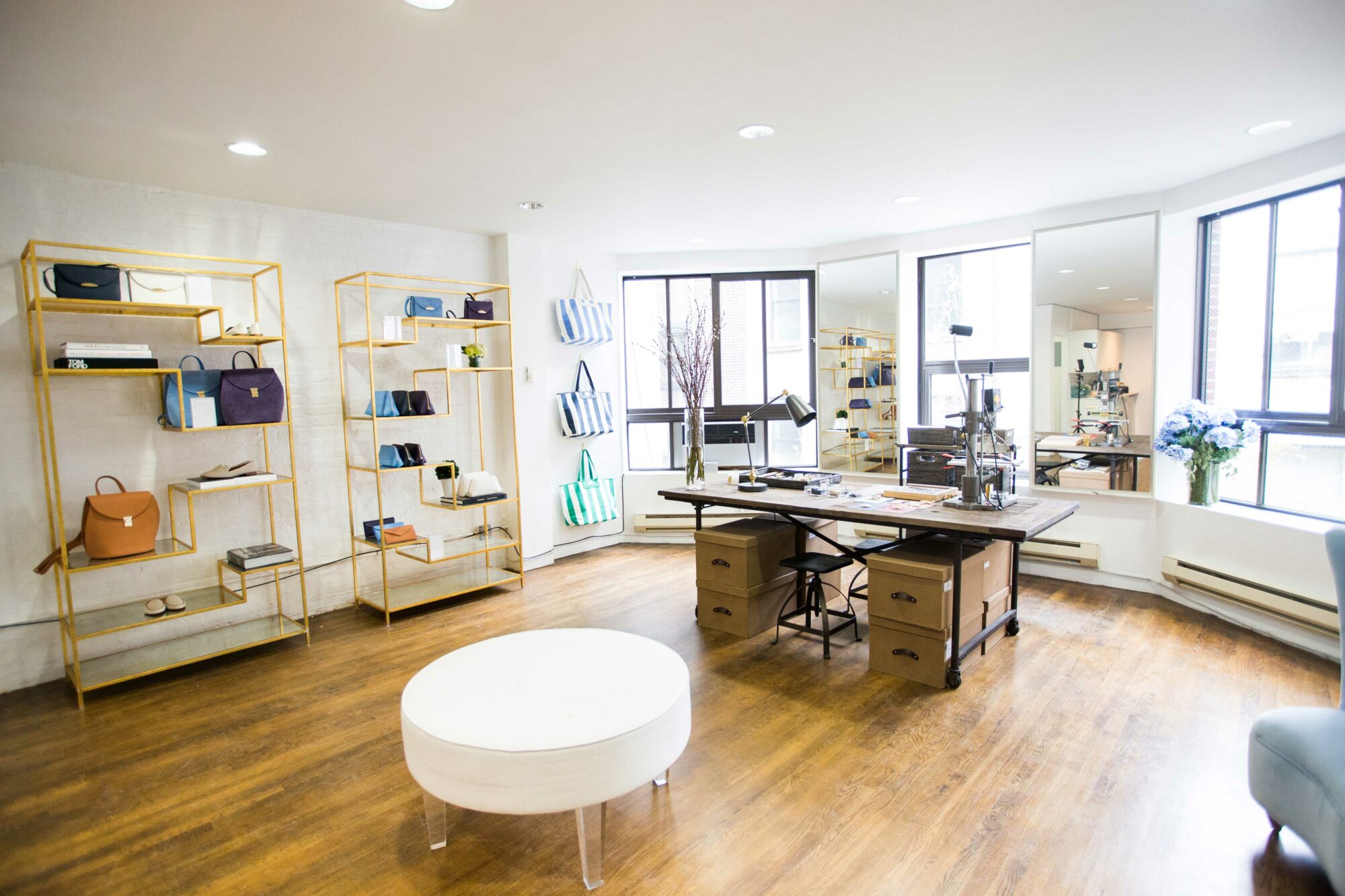 The showroom features a "workshop," where the team can personalize any item with embossing, monogramming and custom painting.

The showroom features a "workshop," where the team can personalize any item with embossing, monogramming and custom painting. 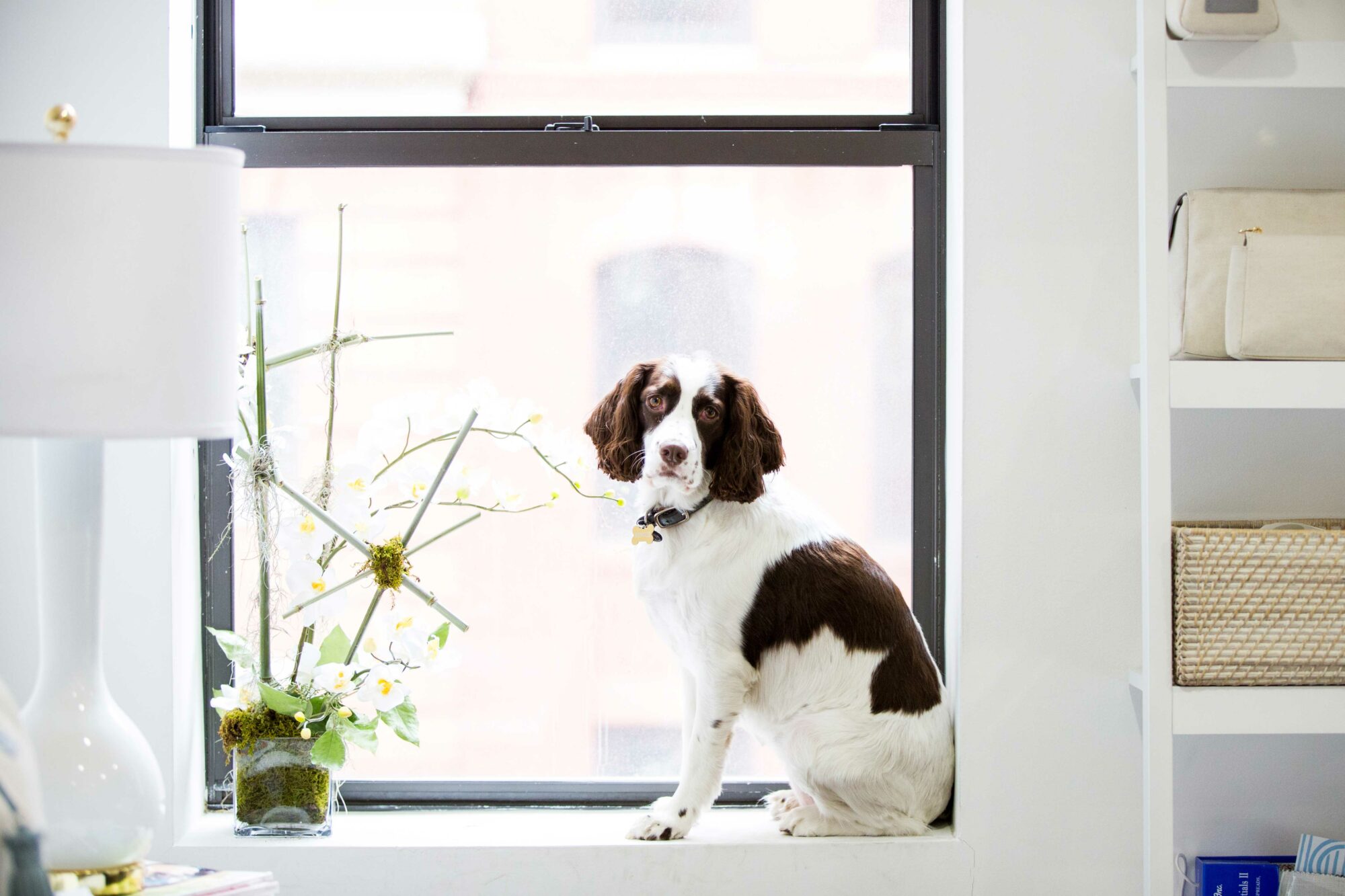 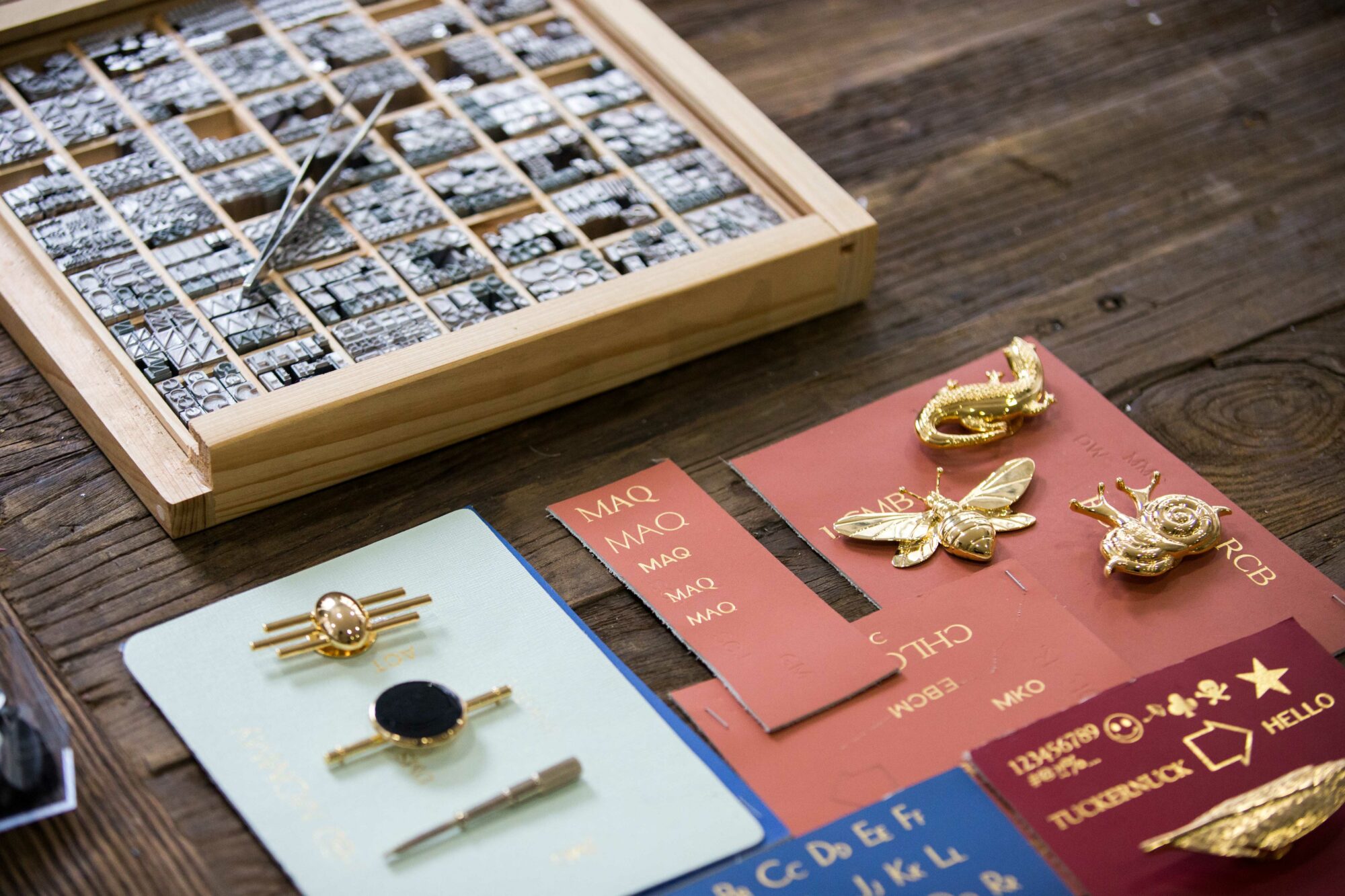 It's all in the details

It's all in the details 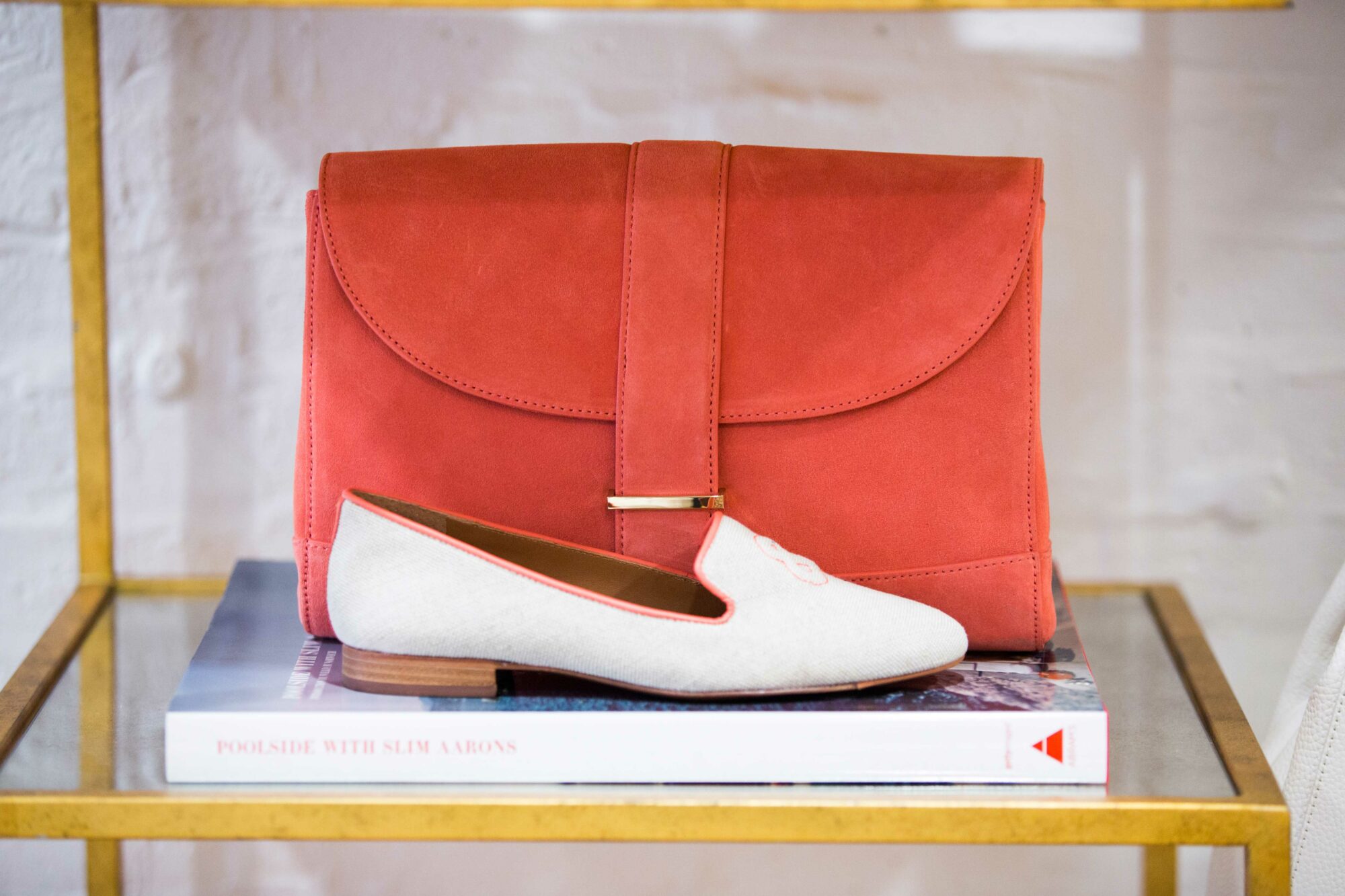 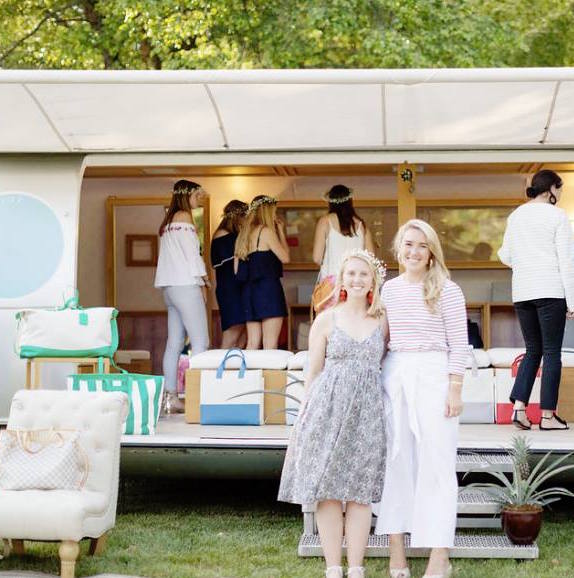 The ladies in front of the Neely & Chloe airstream, which is heading to Austin next.

The ladies in front of the Neely & Chloe airstream, which is heading to Austin next. 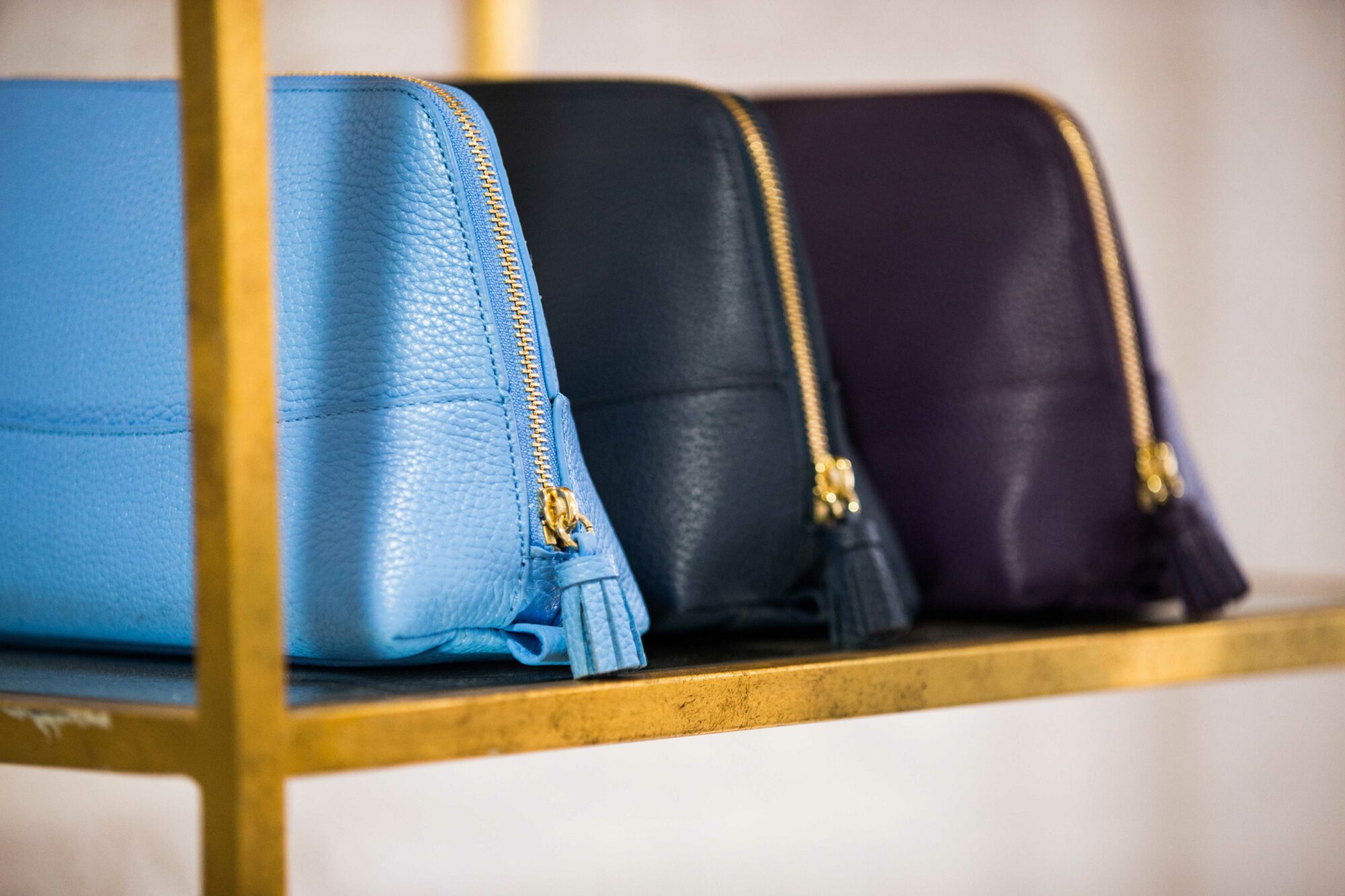 The Large Cosmetic Pouches in Light Blue, Navy and Plum / $108

The Large Cosmetic Pouches in Light Blue, Navy and Plum / $108 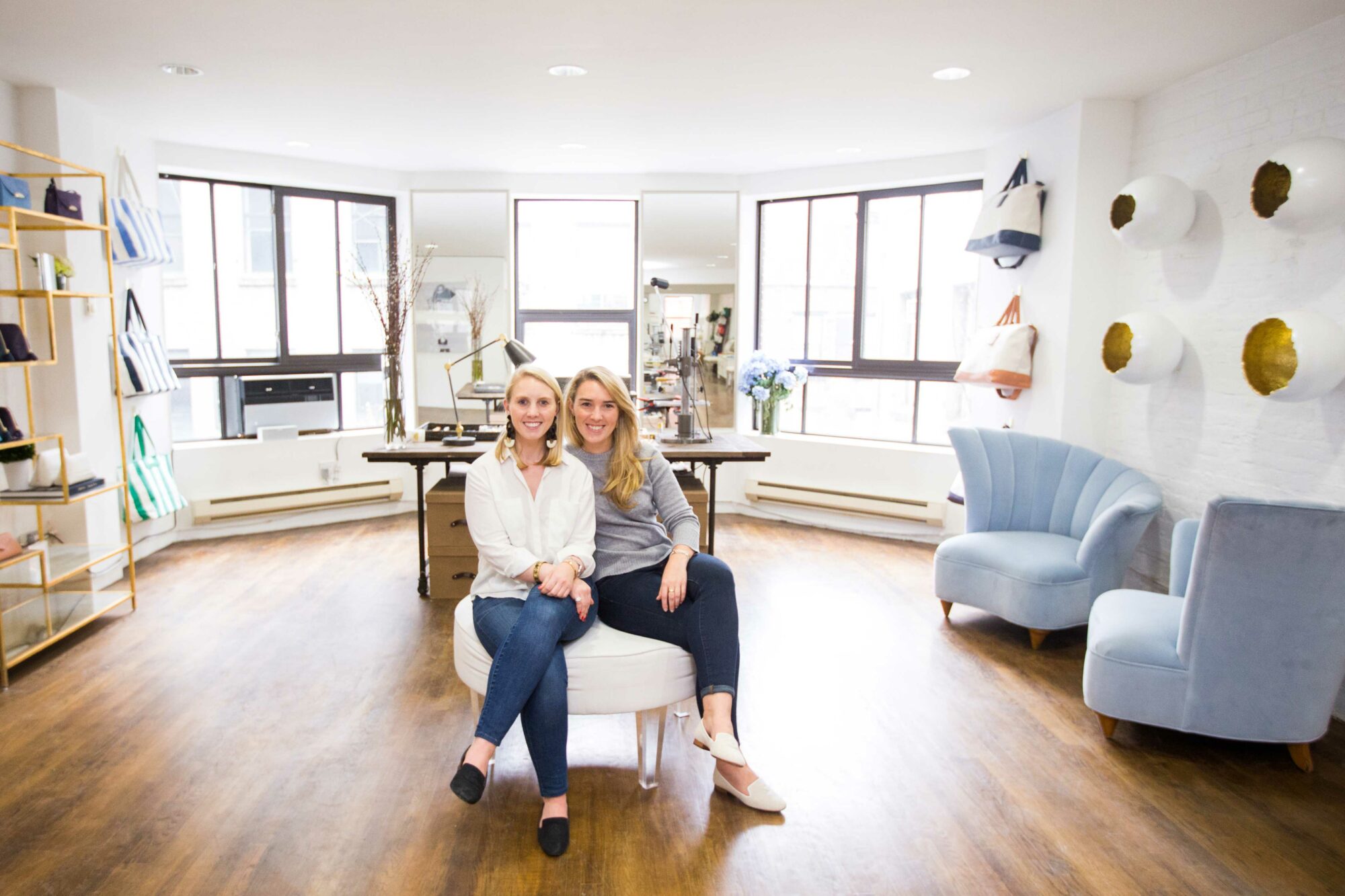 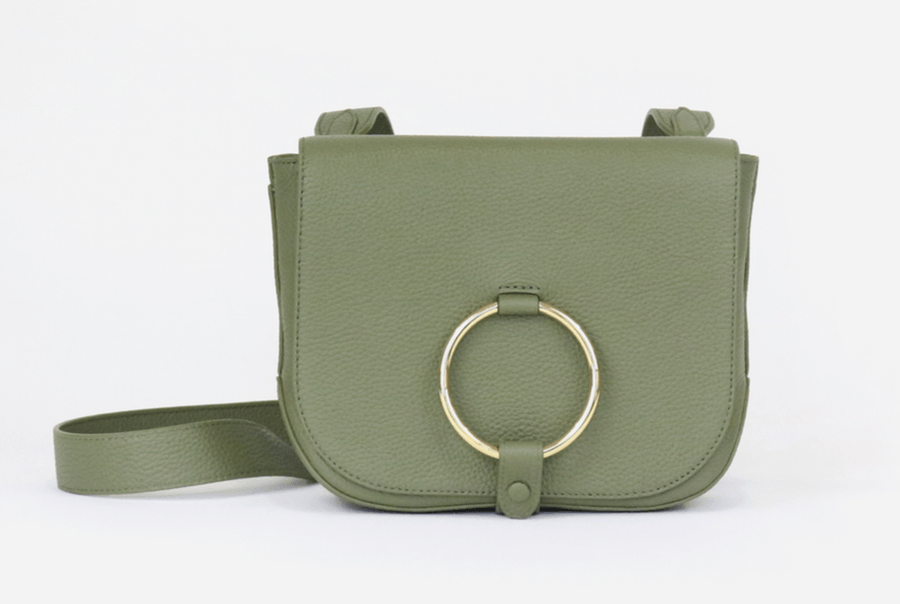 SNEAK PEEK: This lovely olive green crossbody isn't out until next month!

SNEAK PEEK: This lovely olive green crossbody isn't out until next month!

What did you learn on your airstream road trip?

N: Initially, we had been targeting college consumers. And what we realized pretty quickly was that they are pretty happy with the options at their disposal.
They’re either buying, Zara, H&M, because it’s inexpensive and they don’t care about the quality, or mom and dad are helping them, and they don’t really care what the price tag is. It’s one or the other. This desire for something that’s a little bit more sophisticated, a little bit more well-made but also something that you can manage to purchase on your own doesn’t really hit until a little later.

And we saw that when we did summer stops and more suburban stops, we found women in their 20s and 30s gravitating toward this idea of a very curated collection. They were searching for something different [that] felt special to them that wasn’t J.Crew or Coach or Michael Kors, or something that felt like every third person was walking down the street with. Rather something that was really curated, made for them.

So, Chloe, how did you get involved?

C: I graduated just a year after Neely. And during my senior year got a job in merchandising at J.Crew. I started there right after I graduated and was there for a little over a year. And then toyed the idea of leaving for a while.

N: It took a little convincing.

C: Yeah it did! And then I decided to leave in August. And I came on and started really working on it in September of 2015, and worked on it for a year, and then decided to do a fall launch for 2016. So, it’s been almost a year now that we’ve been in business!

Did you always know you wanted to start your own brand?

N: We always knew we wanted to design our own product. And we looked at it like an HBO or Netflix model: Stream content from other people, go get what you think is the best of what’s out there, and then slowly but surely you can introduce whatever you see is working, you can improve upon that, and then introduce it on your own. So the whole idea was that we would go places, convert the customer, and then drive the traffic online. But instead of transferring to our own product gradually, we decided to do it abruptly. We wound down the airstream tour, and took six months off to develop our product. Then, thankfully, our customers liked what we created for them.

How do you break up the work between the two of you?

C: I came on and really started doing most of the merchandising production role. Just because I’d had a little bit of experience with that at J.Crew.

N: She brought in institutional knowledge to the table, which I just was lacking. And I would say the easier way to honestly break it down is that we have very different skillsets, so we work together on almost every project, because I think we’re both very good at different things. Chloe is the executor; she is the one that’s like, “These are the 15 things on our to-do list, and we are getting them done.” And I’m a little bit more of a free spirit.

What can we expect from the fall collection?

N: It’s more adventurous, I would say. So many of our silhouettes are very clean and classic, and this is a little bit more fun and playful.

Let’s talk about this gorgeous showroom!

N: That’s my favorite thing! I, by no training or anything formal, really do love to do interiors. A ton of this stuff came from our pop-up on Bleecker Street, which we had for four months in the fall. We saw it as an opportunity to tell a little bit of a story about the brand because the products are so clean and understated, we wanted to have a little bit of our personality come out in the décor.

We wanted a really fun mix of brass and velvet and lucite integrating the brand colors, but felt a little bit a little bit glamorous as well. But nothing too overstated. So you’ll see a lot of those elements have transitioned and made their way over here. We found some really fabulous vintage slipper chairs in a vintage store on Dixie Highway in Florida. Had them sent here and recovered.

C: They were in this really terrible checkered fabric.

N: We recovered them in a blue velvet that I found that matched our brand colors, and we also had curtains made. I think it was important to show our aesthetic without having the décor speak louder than the product itself.

C: It is very exciting for us! I remember receiving the email and not believing it was real. It was something Neely and I always dreamed about but never really thought it would become a reality. One of the best parts about being a part of the Forbes 30 under 30 community is the people. We went on the Israel trip in April, and we met so many people with amazing companies. It was so interesting hearing their stories and learning about their achievements.

What advice do you have for other young entrepreneurs?

N: It’s really important to celebrate any and all victories and realize that they happen on a day-to-day basis. You’re going to have little wins, and then there are days when you’re just like, “Ugh! Everything is going wrong.” There are a lot of challenges. So when you do have little wins, it’s very important, because that’s what keeps you going.

C: Yeah, I agree. And I think I would say to be flexible. I was not a very flexible person, and I don’t like when things don’t go according to plan. But now, I accept that there are certain things are out of my control. There’s always a plan B, and you’ll always be able to figure it out.

What is your favorite piece in your own home?

C: We have this huge circular mirror when you walk into our front hall.

N: I have these two sketches from when our family went to Buenos Aires — I think I was 13 maybe — and I went to a market with my dad, and we found these little fashion drawings. And I had them framed when I went to college my sophomore year, and they’re still in my room now.

C: Wait, I have a different answer. It’s my bed.

N: Yeah, her bed is literally a cloud.

What’s the last thing you searched on Google?

N: Local truckers in Austin. Literally 12 minutes ago, I was searching for a long haul truck driver to take the airstream from San Antonio to Austin. But I actually think I’m going to end up driving it myself.

Who are your role models and fashion icons?

C: I love Eva Chen. I think she seems super normal and nice and relatable, and she’s become very successful on her own. She’s so smart.

N: I think we really look up to our parents as well. My dad started his own company right out of college, so to look at what he’s been able to do from that — it’s very admirable. And style-wise, we are very informed by our mom. She has a timeless, classic taste. Also I’d throw Catherine Deneuve in there, too, as a style icon, because she’s fabulous.

The Neely & Chloe showroom is located at 185 Franklin Street in New York City.