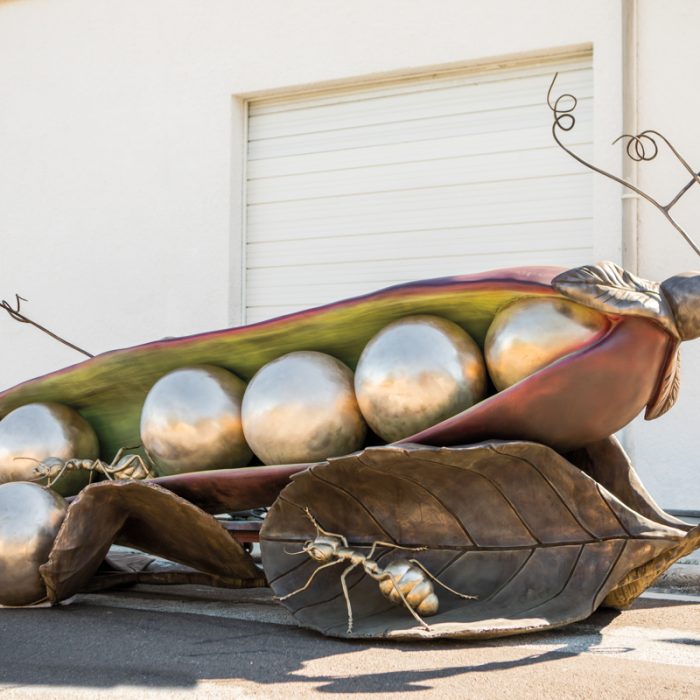 In front of sculptor Susan Phipps Cochran’s Palm Beach estate, two giant ants greet passers-by, their slick bronze heads and spiny arms surrounded by lush foliage. The pair caused two car accidents the day they were installed, blamed for distracting curious drivers, Cochran recalls with a faint twinkle in her eye. In a strange way, it’s a point of pride for the artist, who is known for her whimsical and towering outdoor bronze sculptures. Her beloved insects, from the 8-foot earwig to a colony of colossal ants, have trotted the globe, displayed in places such as Chicago, New York, Las Vegas, New Mexico and Dubai.

A few bronzed critters reside at Cochran’s estate, known as Casa Phippsberger–a mash-up of her family name and her husband’s, preservationist Robert Eigelberger. Walk through the property’s botanical gardens, “and you’ll probably learn all you need to know about me,” says the sculptor, who has found endless inspiration there since childhood. 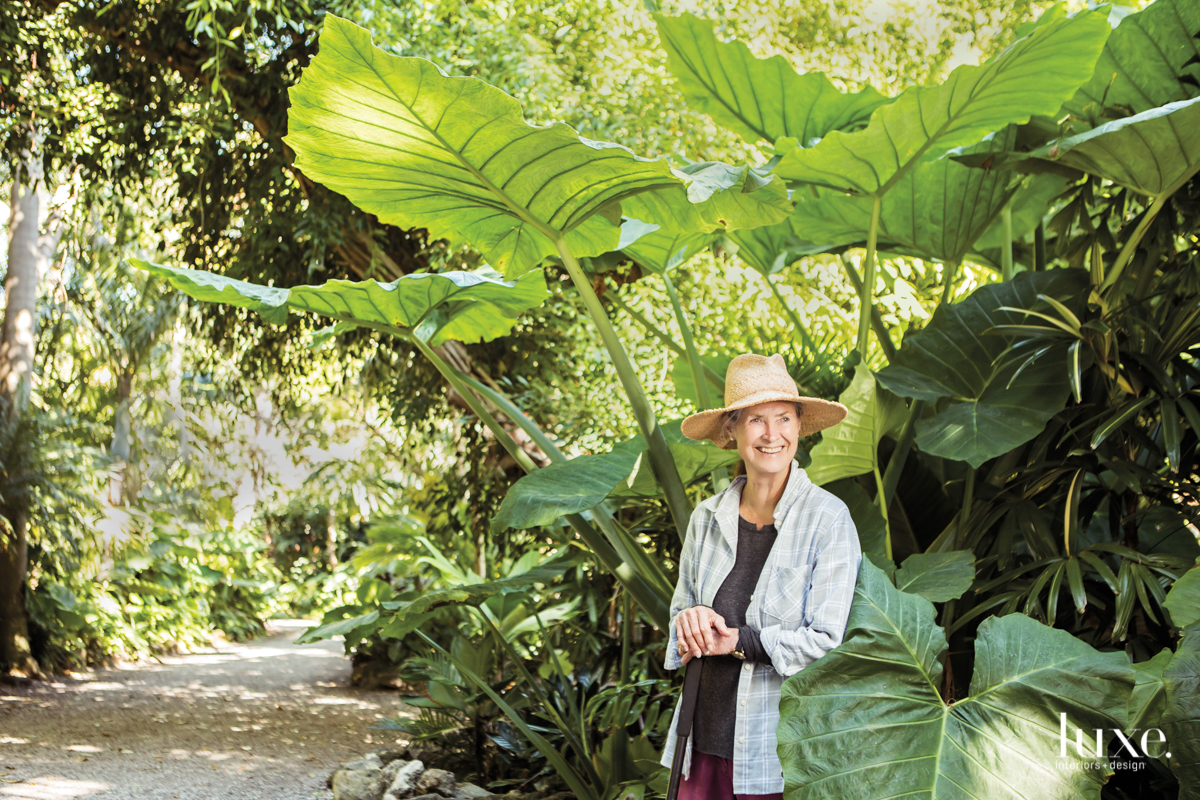 The artist in the gardens on the grounds of her Palm Beach home, nicknamed Casa Phippsberger--a mash-up of her family name and her husband's, preservationist Robert Eigelberger.

The artist in the gardens on the grounds of her Palm Beach home, nicknamed Casa Phippsberger--a mash-up of her family name and her husband's, preservationist Robert Eigelberger. 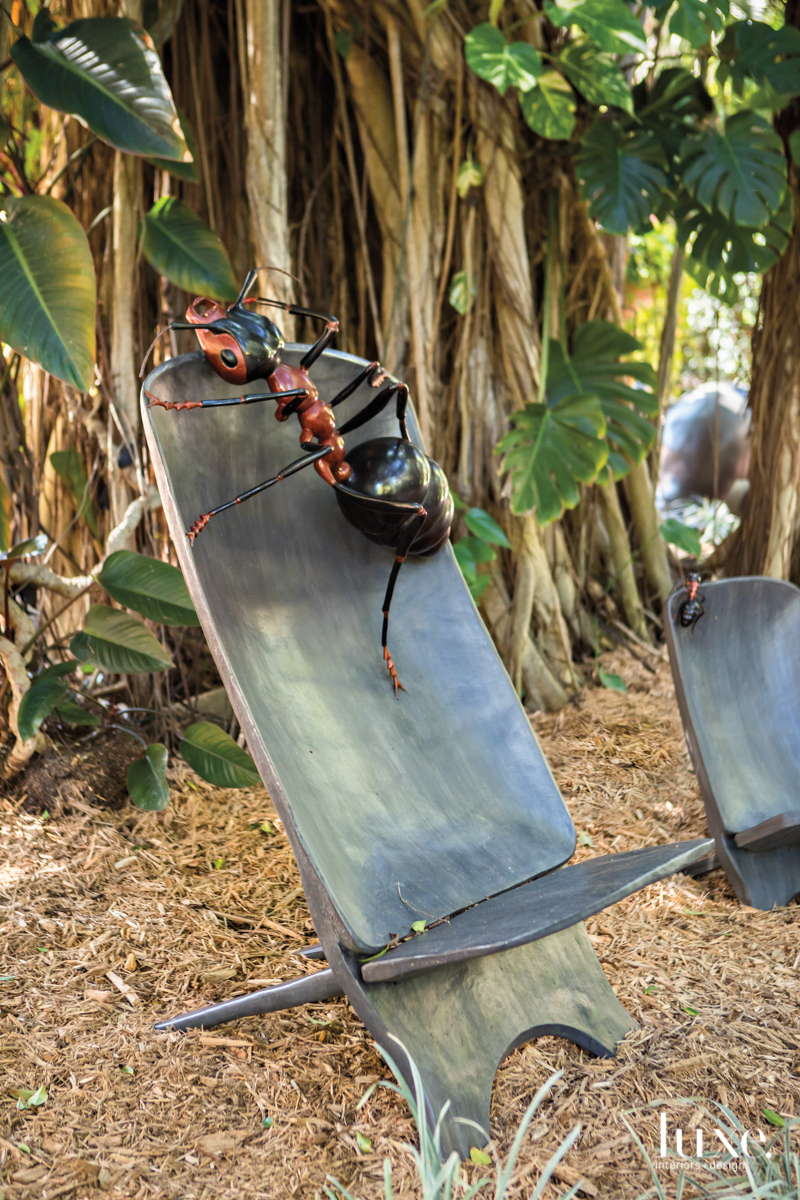 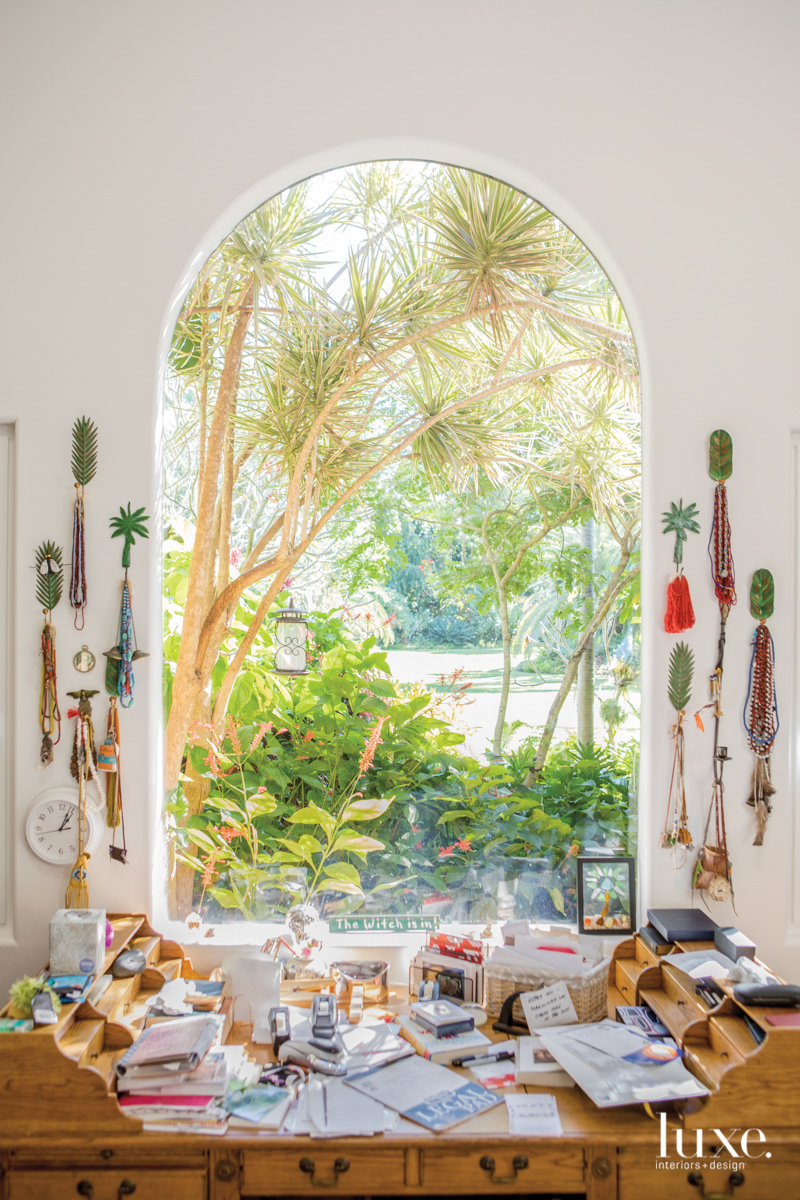 The Phipps family, and its estate, traces its roots to Palm Beach since the early 1900s, when Cochran’s great-grandfather, Henry Phipps Jr., a partner in Andrew Carnegie’s steel business, owned one-third of the island. Her father, polo player Michael Phipps, was an accomplished painter, and artmaking was a family tradition. “We knitted and learned poetry,” she recalls. “We were always making things.” As a teenager, Cochran tried art school in Paris, “but I lasted two days,” she admits. “The first day, they trotted out this poor carbuncular youth, stark naked, for us to sketch, and that was the end of it for me.”

Instead, Cochran became a student of the world: from excavating underwater shipwrecks to gleaning life lessons from Zulu traditional healer Credo Mutwa. For 20 years, she practiced intricate Native American beading, creating glittering tableaus of flora and fauna. But soon “my eyesight gave out,” she says, “so I went bigger and better in bronze.”

That endeavor began in 2003, when local artist Helmut Koller asked Susie to participate in a fundraising event for a local hospice organization. He suggested she decorate a chair to auction, but she took it a step further and decided to make a pair of bronze floating overalls shaped for seating. To help her create it, Koller recommended she work with West Palm Beach’s Robert St. Croix Sculpture Studio and Foundry. That introduction has since led to a nearly two-decades-long collaboration in which St. Croix’s team helps bring the sculptor’s playful visions to life.

A parade of ideas has passed through the shop, from more chairs resembling clothing without their wearers to life-size tribal warriors in action and enlarged Floridian fruit and plants. Yet among her range of subjects, her signature might be considered the ant. Cochran is drawn to the insect not only its architecture quality but also the reactions the human-size creature elicits, which can be perplexed, squeamish or amused. “One day, I’ll probably create a cockroach,” she teases.

Though creating strikingly realistic exoskeletons, Cochran isn’t invested in strict anatomical accuracy. “I take a bit of poetic license, but it’s rooted in reality,” she explains. The artist may consult photographs but mainly relies on a lifetime outdoors. “The ideas are all in my head, rattling around like old stones,” she says. To start, the sculptor creates a clay model. Working with the foundry team, she then employs lightweight Styrofoam armatures to enlarge the final form, adding details in clay to create molds using the lost-wax process. For each piece, she creates the patina, a painstaking process as the exact color she requires is developed.

Cochran’s latest sculpture, which has taken more than a year to complete, consists of a 22-foot peapod with ants rolling peas like the mythical Sisyphus. Her bugs “are never ferocious,” she says. “I don’t want to threaten anybody. I want people to be able to come close and enjoy them.”

That they do. Whether among the deserts of Dubai or the bright Vegas lights, both young and old happily perch on her ants’ legs and clamber down their giant backs. For the artist, it’s innately joyful watching admirers rediscover childlike awe for nature, much like she finds in the gardens of her Palm Beach home. “Grown-ups don’t get playgrounds,” Cochran says. “And we all deserve somewhere to play.”