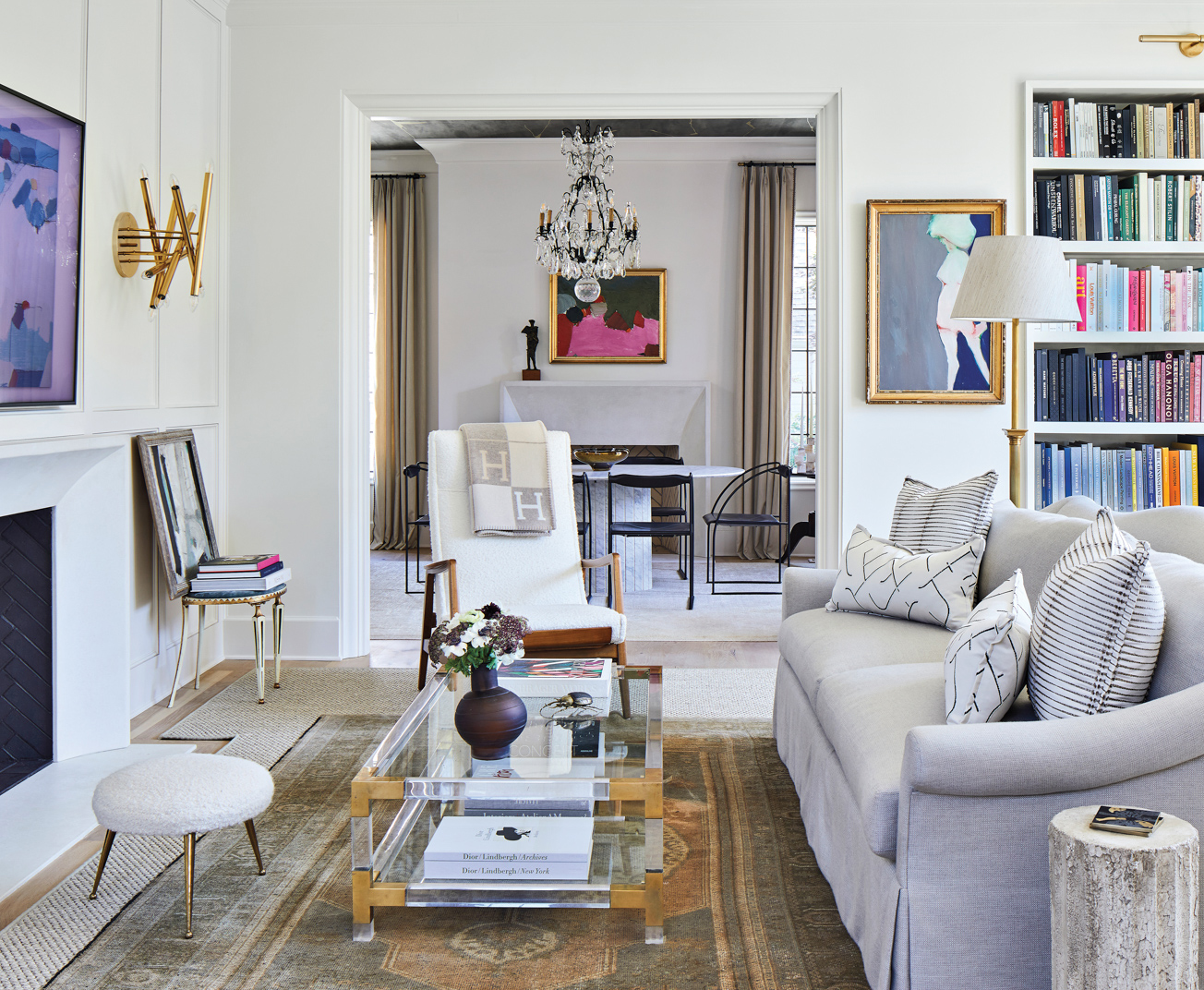 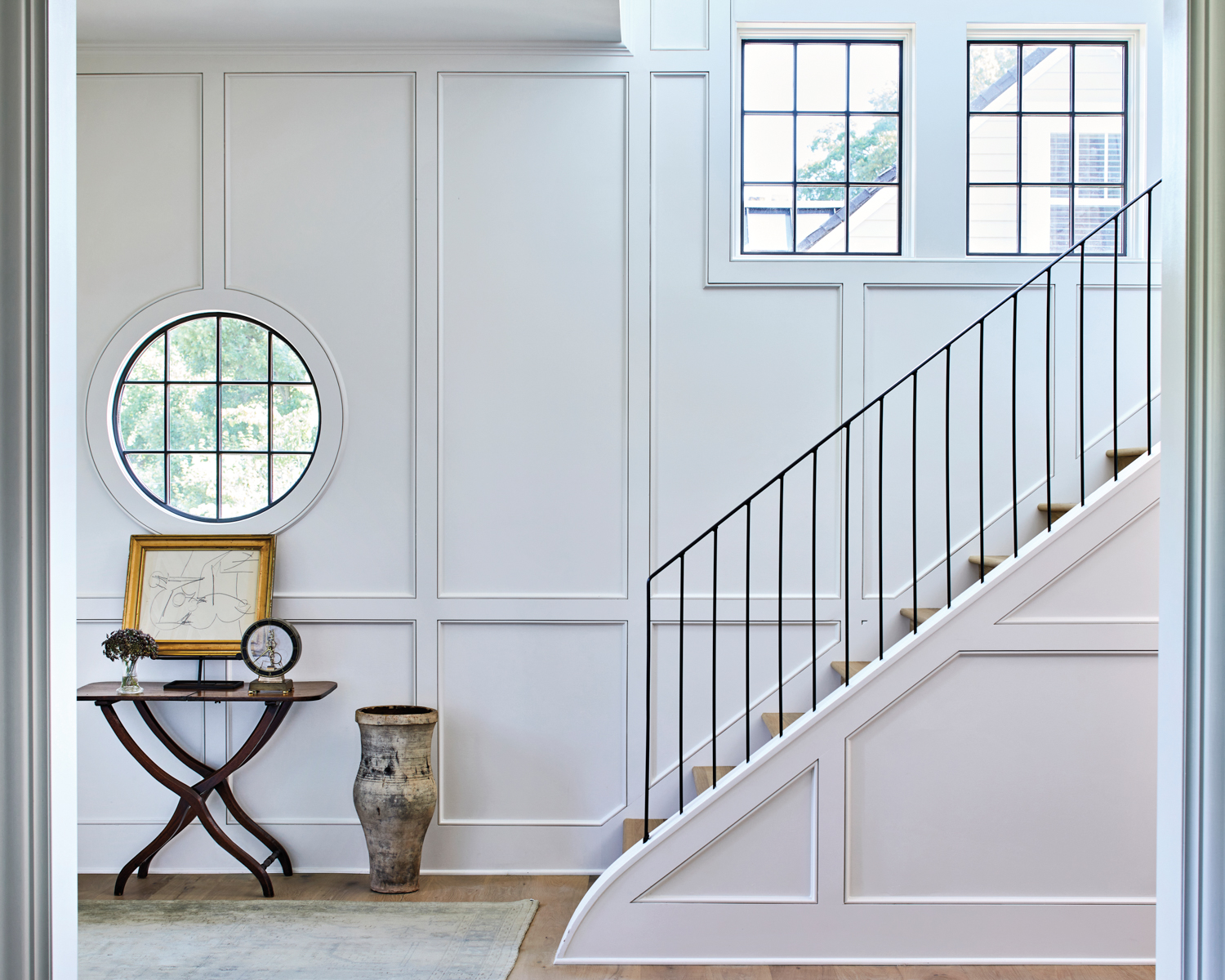 A pillow of Pierre Frey’s Roccia jacquard rests on a highback gold velvet settee from Codarus in the dining room. Vintage Italian brass-and-iron sconces from Chairish flank a charcoal on paper purchased at Doyle. The brass-and-stone drink tables are from Circa.

A pillow of Pierre Frey’s Roccia jacquard rests on a highback gold velvet settee from Codarus in the dining room. Vintage Italian brass-and-iron sconces from Chairish flank a charcoal on paper purchased at Doyle. The brass-and-stone drink tables are from Circa. 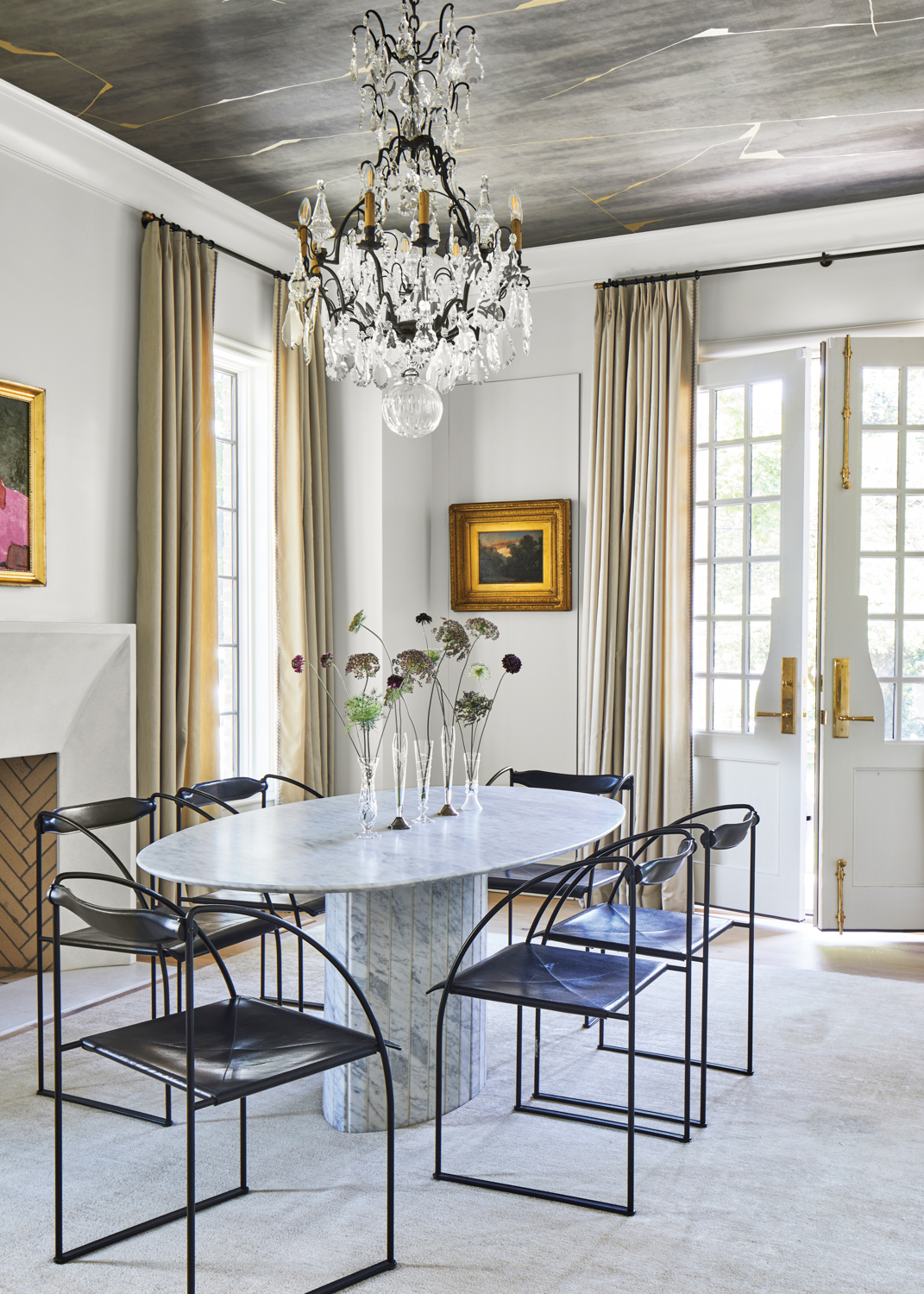 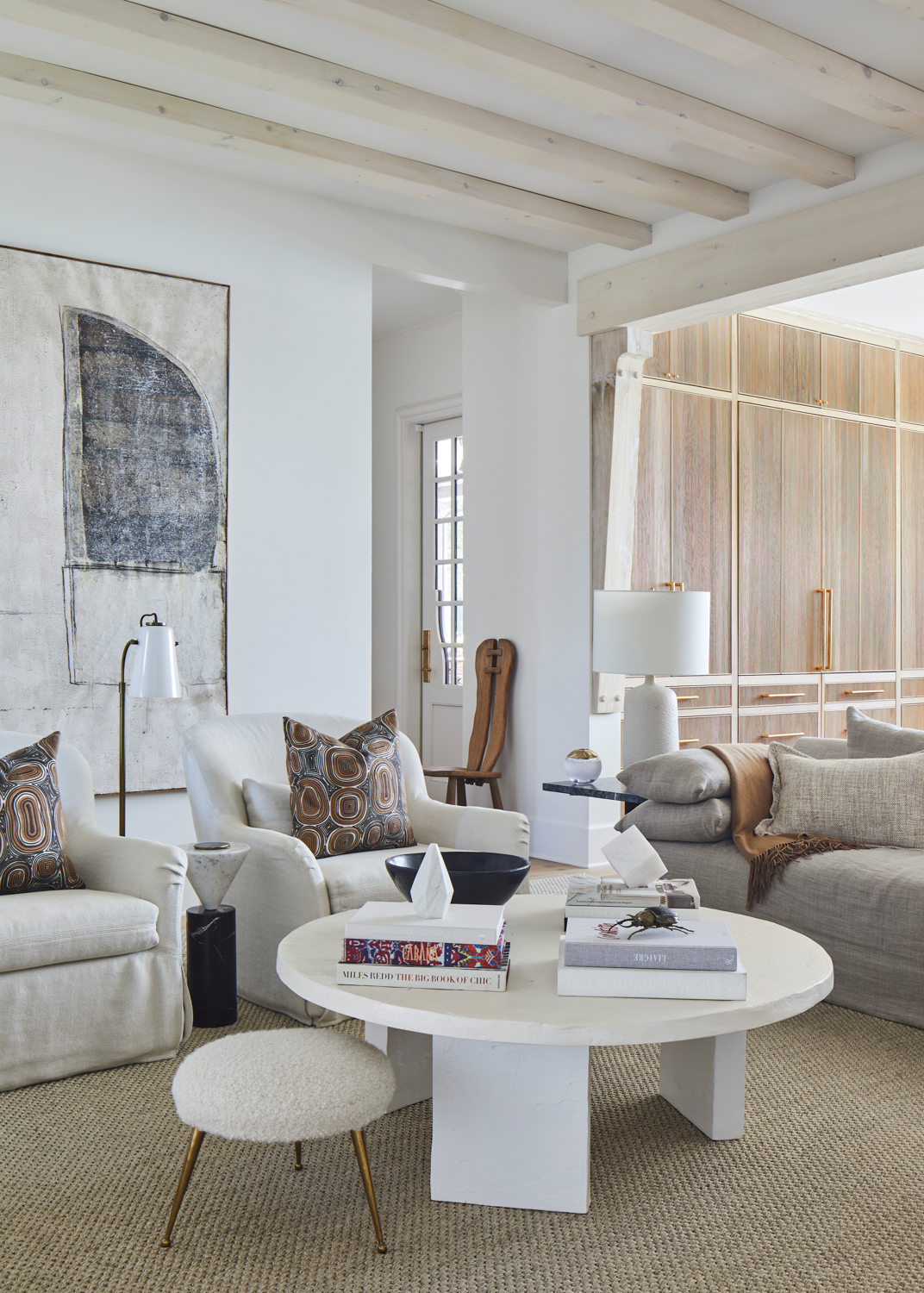 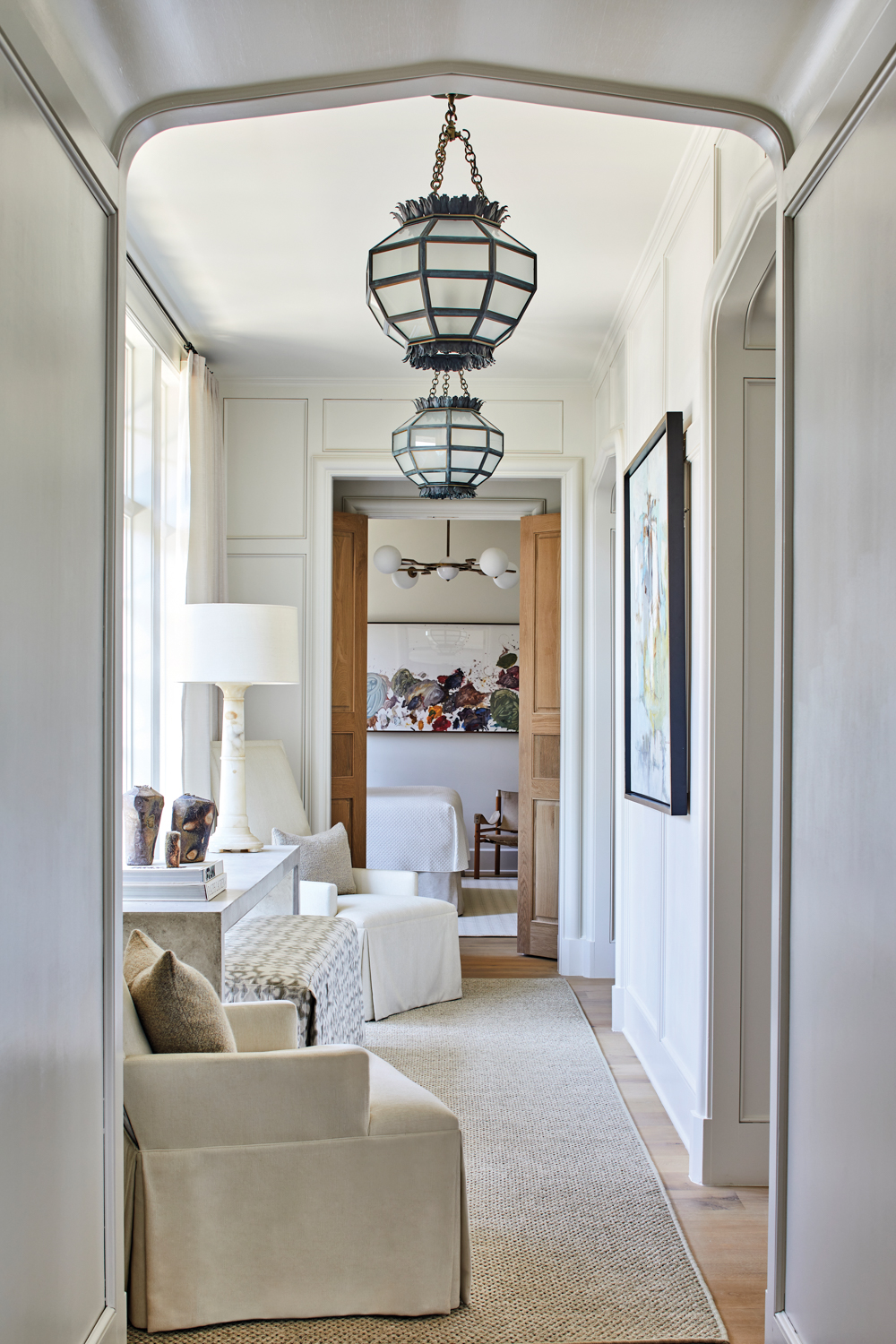 This hallway doubles as a seating area with Lee Industries armchairs, a custom skirted bench donning Donghia’s Higgins textile, a concrete console by Elegant Earth and a Fibreworks rug. Two Needles Hang chandeliers by The Urban Electric Co. suspend above.

This hallway doubles as a seating area with Lee Industries armchairs, a custom skirted bench donning Donghia’s Higgins textile, a concrete console by Elegant Earth and a Fibreworks rug. Two Needles Hang chandeliers by The Urban Electric Co. suspend above. 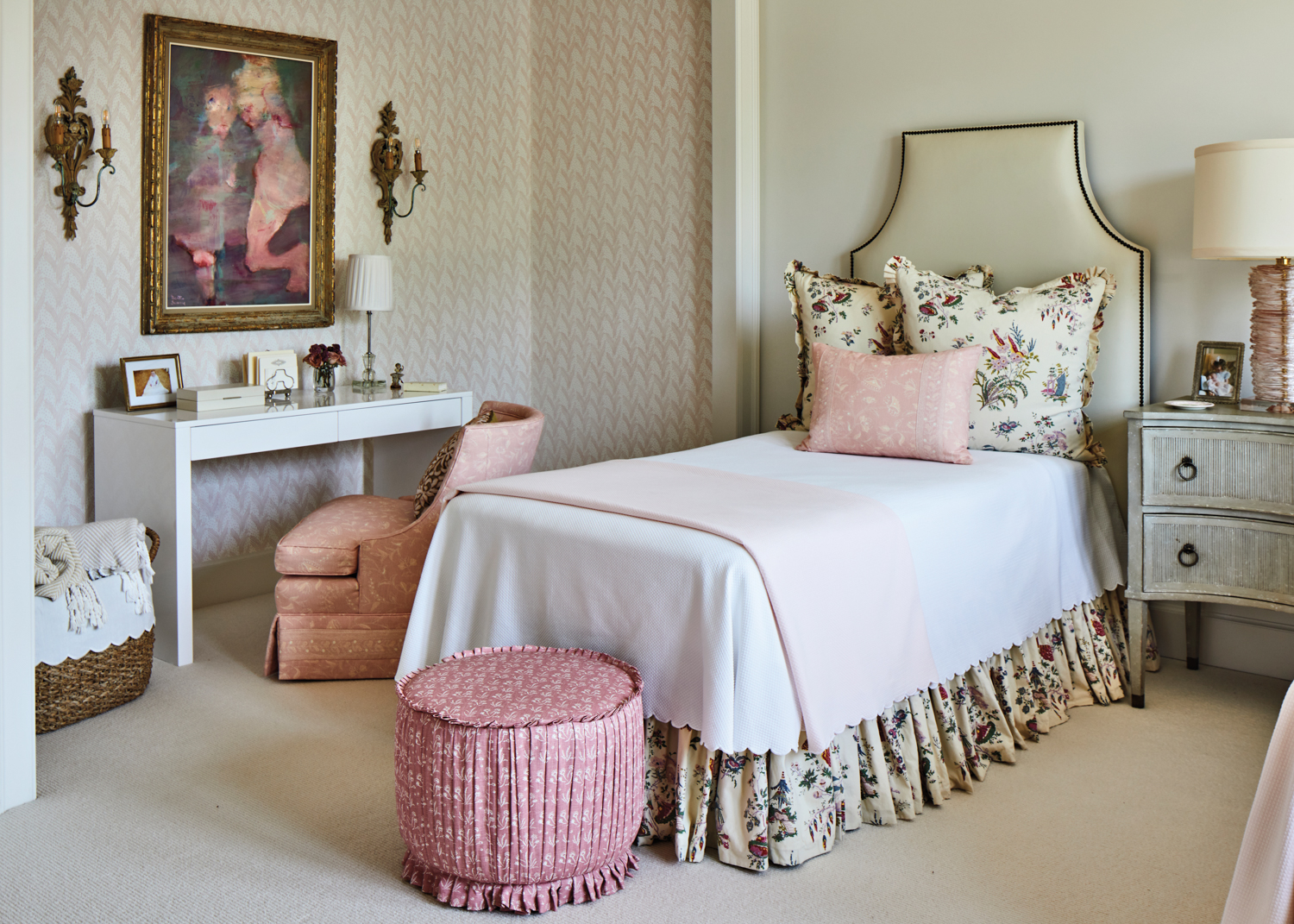 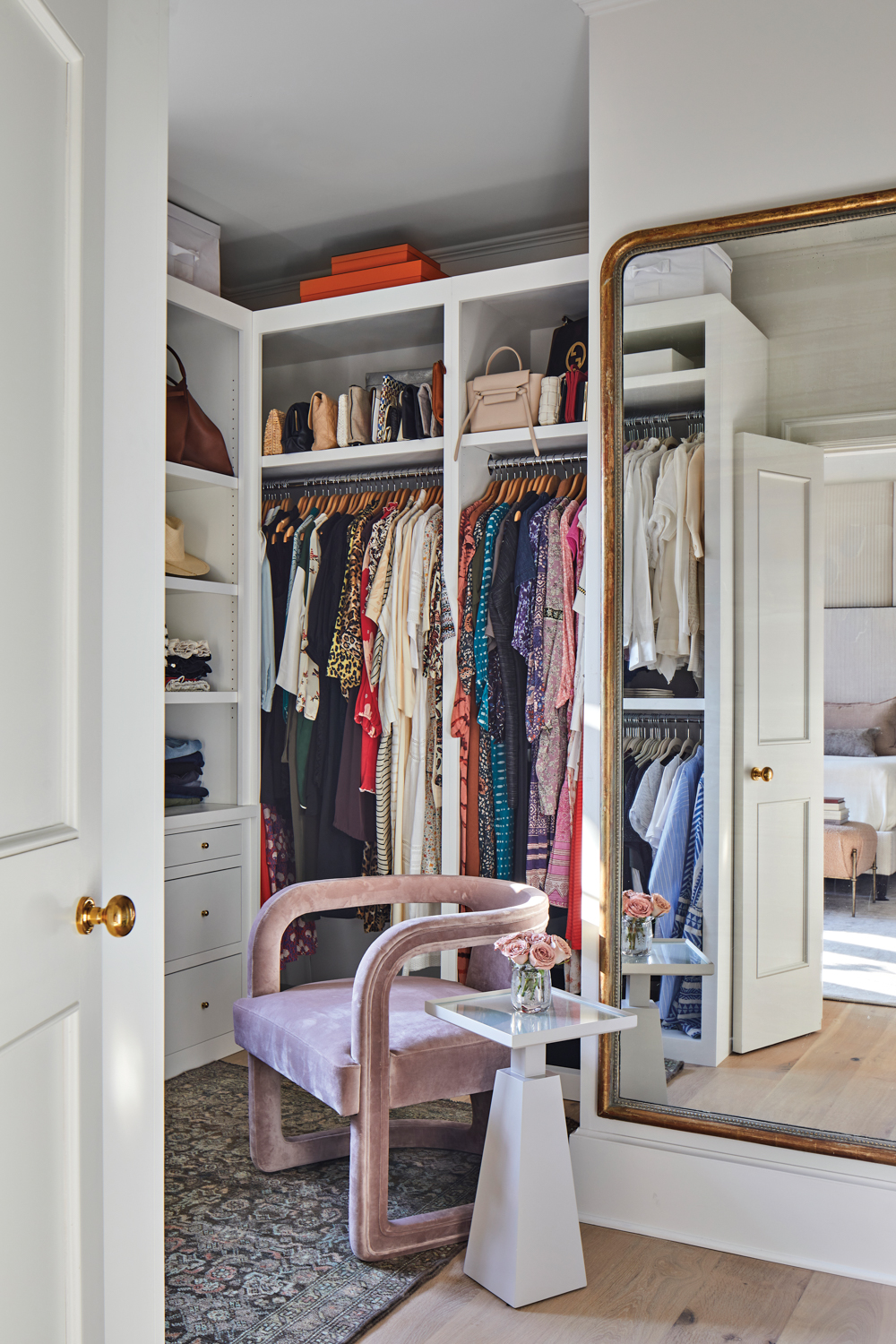 A newly completed residence in Chattanooga might not seem like the most obvious opportunity to telegraph an experience of Parisian luxury. But for one couple, the revitalized city’s raw potential provided the blank slate for just such an ambition. It all started with one particularly memorable trip to Paris, when the wife combed antique markets with friends and stayed at a hotel in “a beautiful old building that had been there forever,” she recounts. Boasting opulent millwork and elegantly appointed rooms, the lodgings had “the bones of a historic structure, but with a mix of traditional and modern pieces,” she continues. “I had always been drawn to that aesthetic, but those interiors really brought my affinity into focus.”

Armed with a camera roll full of inspirations, she and her husband turned to a designer she’d known during her days in Birmingham: Mary Lauren McBride. The goal was to translate that spirit of refined Parisian eclecticism to their family’s new home in Riverview, a fast-growing enclave on the fringe of the Scenic City’s namesake country club.

“Their wants boiled down to a home with character,” McBride notes, “which was something that spoke to my design outlook in general; I love old things balanced with new.” The duo also worked with residential designer Lawrence Mathis to compose the home’s atmospheric floor plan: a collection of contained rooms revealed by arched doorways and connected by long passageways, juxtaposed with open living spaces.

Meanwhile, McBride and her clients probed favorite tomes and their own travel snapshots for examples of millwork that would infuse the abode with architectural depth. Wainscoted wall paneling, for example, gives gravitas to the entry hall, doubling as a backdrop for artworks by Étienne Duval, Robert Cronin, Brook Soss and others. Ceilings in the home received almost equal emphasis: Exposed wood beams highlight the keeping room’s relaxed quality, while glossy crown molding—which McBride punctuated with gleaming wallpaper—conjures glamour in the formal dining room. “These details were very special,” shares Mitch Holland, who worked with fellow home builder Brandon Waters to track down artisans capable of executing such refined accents. Preference also was paid toward materials that would patina over time, from the European white oak flooring throughout to the kitchen’s waterfall island made of Alabama rose marble—a subtle nod to the couple’s former home state. The stone “has such a timeless look,” McBride notes.

Fortified by the grandeur of this architectural envelope, McBride composed a curated style that would capture the couple’s unique personalities, anchoring the scheme using antiques and midcentury pieces the wife culled from shopping excursions in Europe. Emphasizing the tactility of these spaces also underscored a distinctly Parisian relationship to vintage items: that nothing should feel untouchable. “Our goal was to balance the showstoppers with effortless, understated pieces,” McBride explains. Although fresh additions span styles and eras, they retain a cohesive visual language throughout, marked by soft, sinuous silhouettes “and no hard edges,” she notes. It’s why a Vladimir Kagan-style chaise stands so smartly alongside a centuries-old French chest in the living room, why the oval midcentury marble dining table holds court so proudly beneath a Rococo-style crystal chandelier. As for upholstery and other textiles: “We used lots of texture and tone-on-tone palettes,” adds McBride, who chose wool, mohair, linen, velvet and bouclé in warm, earthy tones, along with touches of the wife’s favorite color, blush. “Everything we chose had a broken-in feeling, as if it had been there forever.”

Noting the salon-like atmosphere, McBride took care to cultivate a nonchalant aura throughout the home’s gathering areas. To eschew old-fashioned stuffiness, “we never overcrowded areas, saving room for circulation,” the interior designer explains. “We always considered how people settle in to spaces. So, in the living room, keeping room and even the foyer, we have spots where you can take a seat and put down a drink.”

Parisian warmth and conviviality, it turns out, translate perfectly to the couple’s life in Chattanooga: their weeks filled with impromptu afternoon gatherings among friends and leisurely Sunday mornings with their two daughters. “Our home is built for casual entertaining and quality time together,” the husband expresses. And whether in Tennessee or Paris’ 3rd arrondissement, notions like that are apt to transcend time and place. 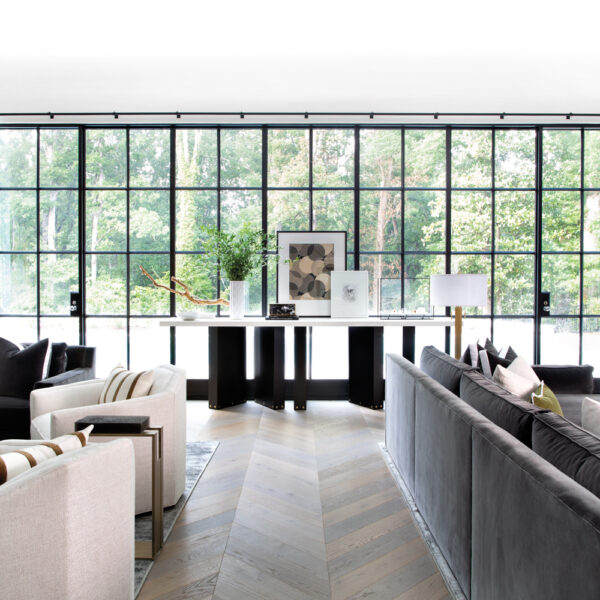 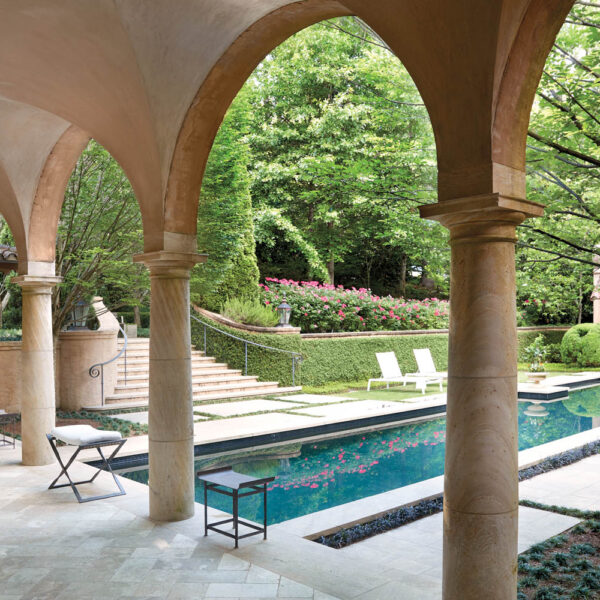 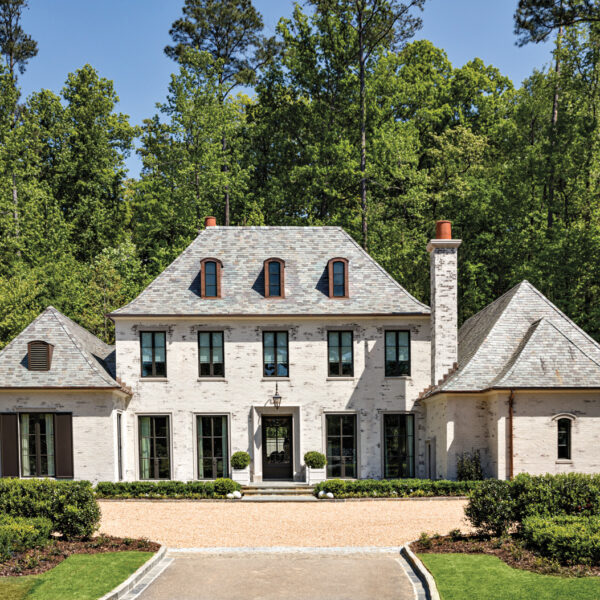 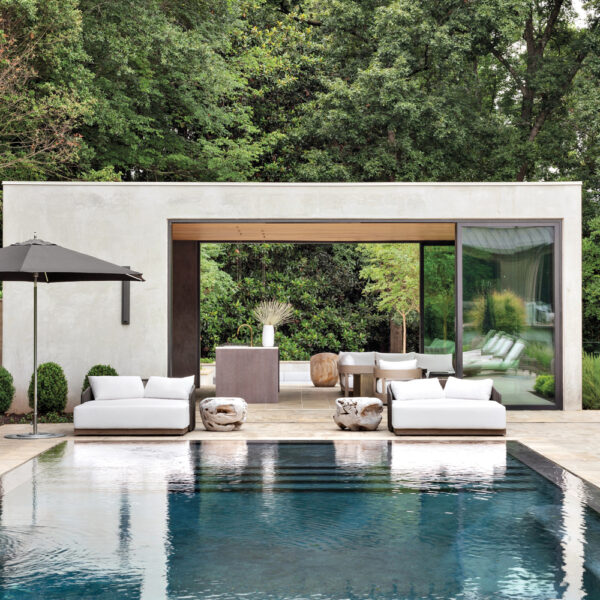 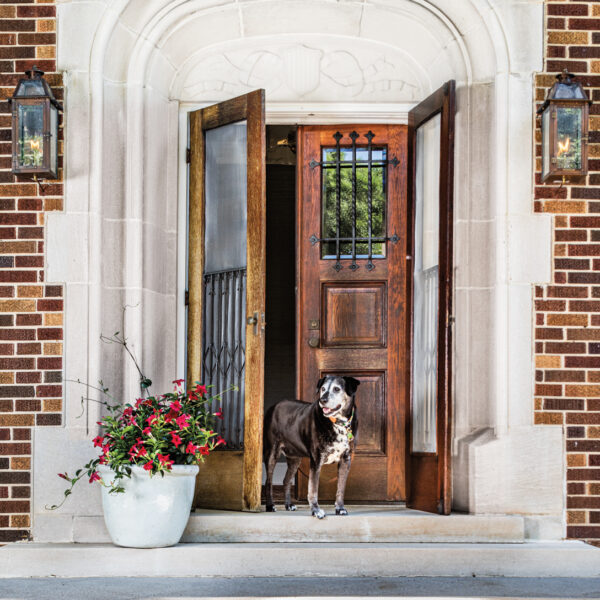