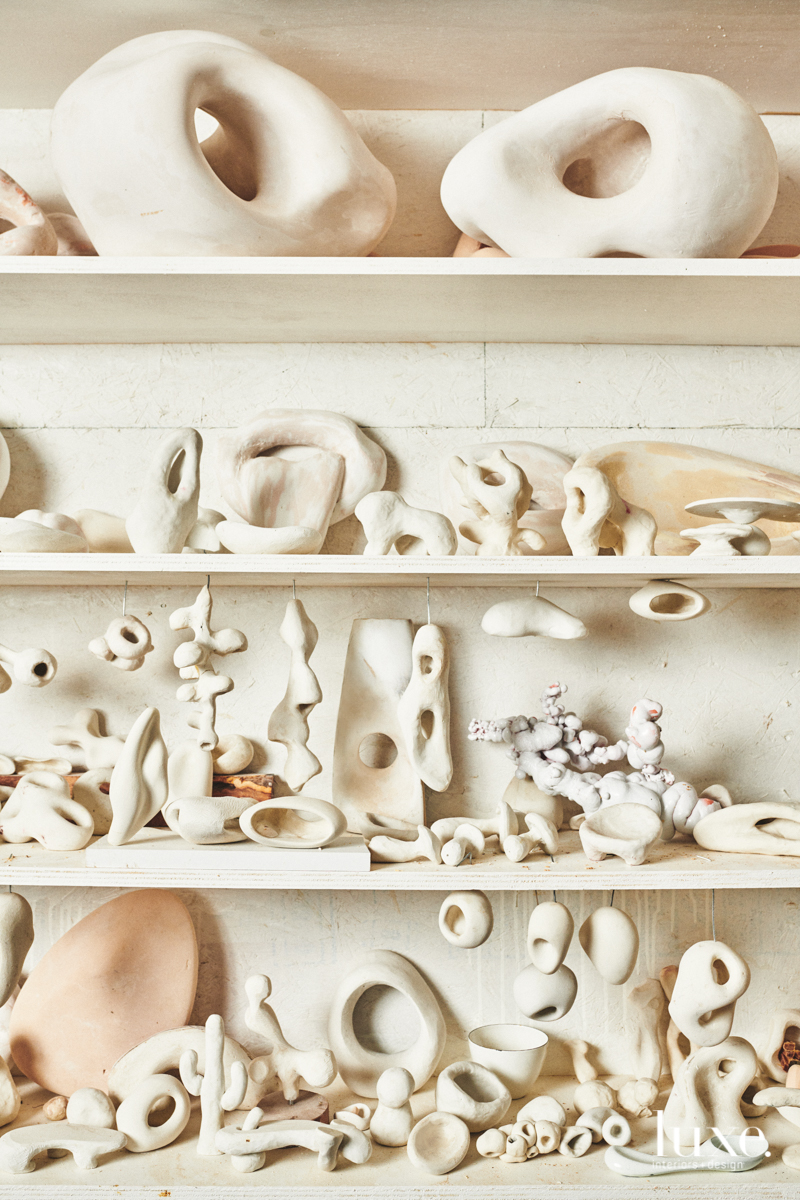 Rogan Gregory’s influences are primarily naturally occurring, like formations in water or the way snow accumulates in a drift.

Nature is an age-old artistic muse, but sculptor Rogan Gregory isn’t so much inspired by bucolic hillsides and sweeping landscapes. He’s far more intrigued by the lines and proportions of ecological systems and evolutionary biology and how they shape our world. “So much of what I do and make is based on the random organization of nature and forms that don’t have the hand of man in them,” he says of his biomorphic sculptural works, which also include functional pieces (think gypsum ottomans and hand-carved stone table lamps). 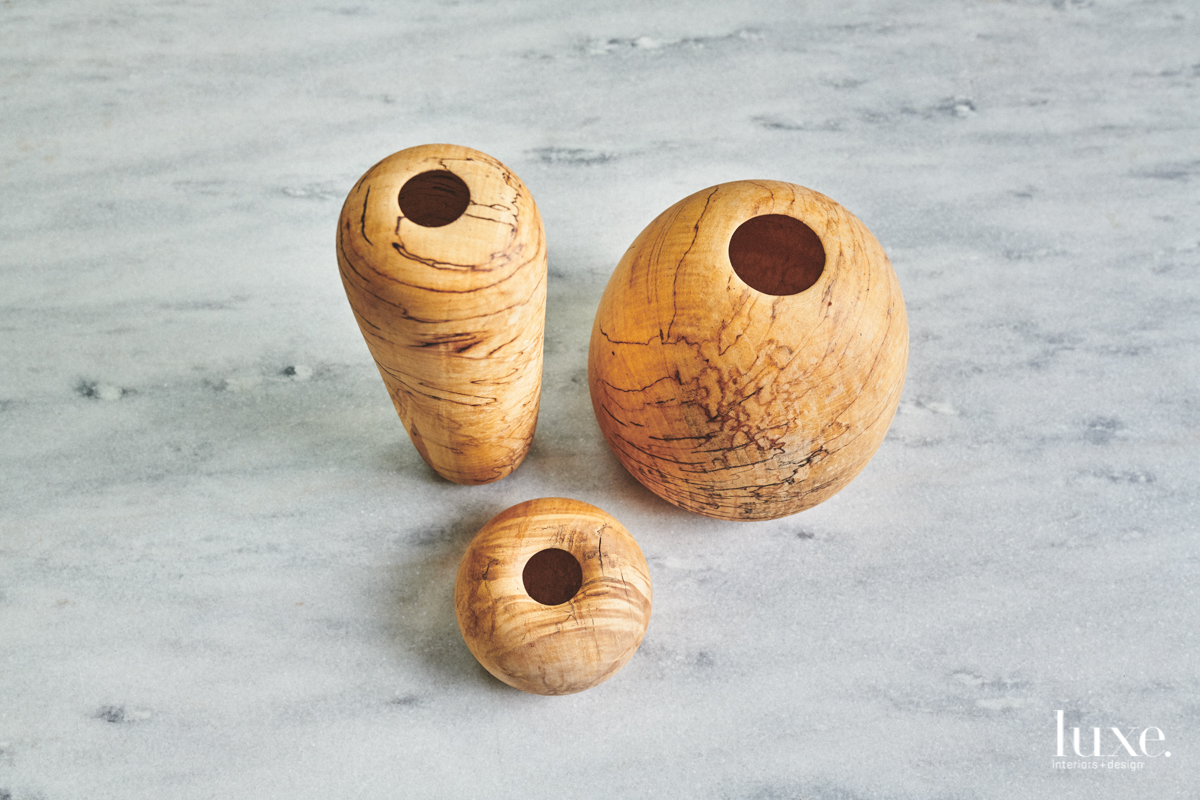 Gregory's work ranges from the functional, such as these spalted maple vessel triptych, to sculptural. Photo by Bryan Derballa

Gregory's work ranges from the functional, such as these spalted maple vessel triptych, to sculptural. Photo by Bryan Derballa 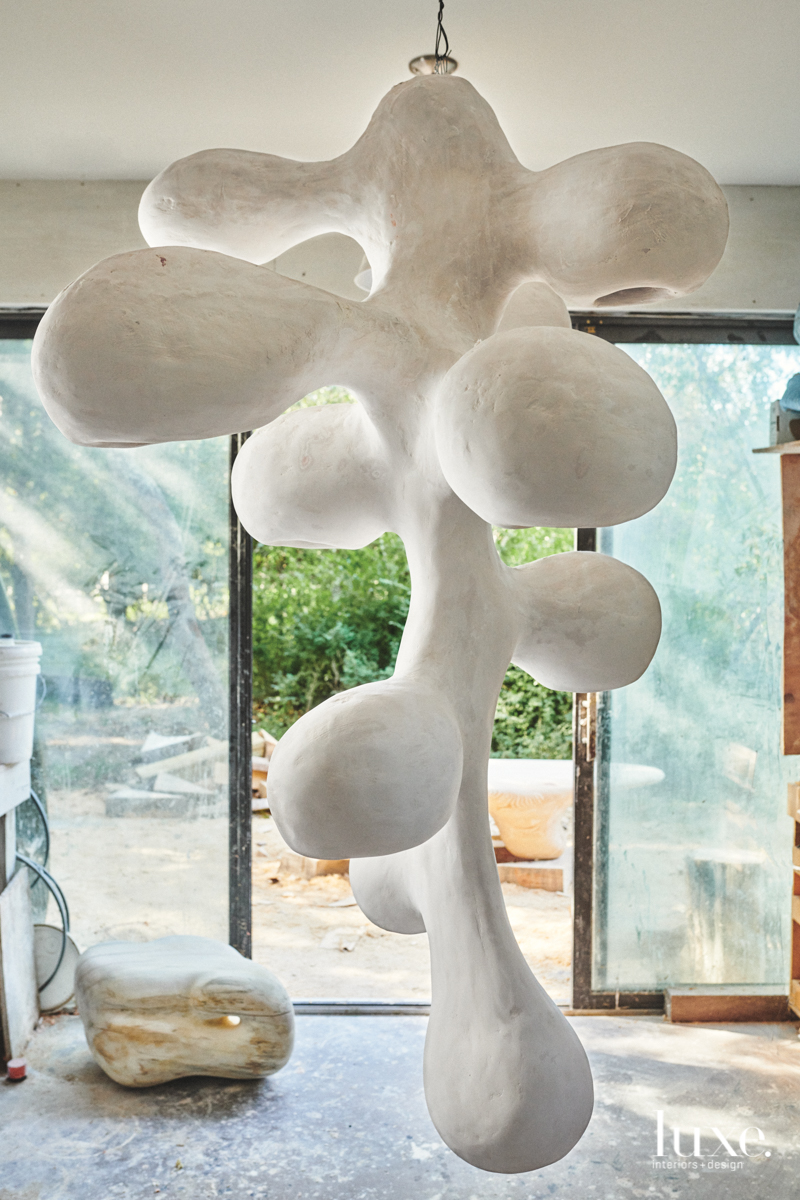 Gregory's "Fertility Form" pendant is one of his more sculptural pieces. Photo by Bryan Derballa

Gregory's "Fertility Form" pendant is one of his more sculptural pieces. Photo by Bryan Derballa 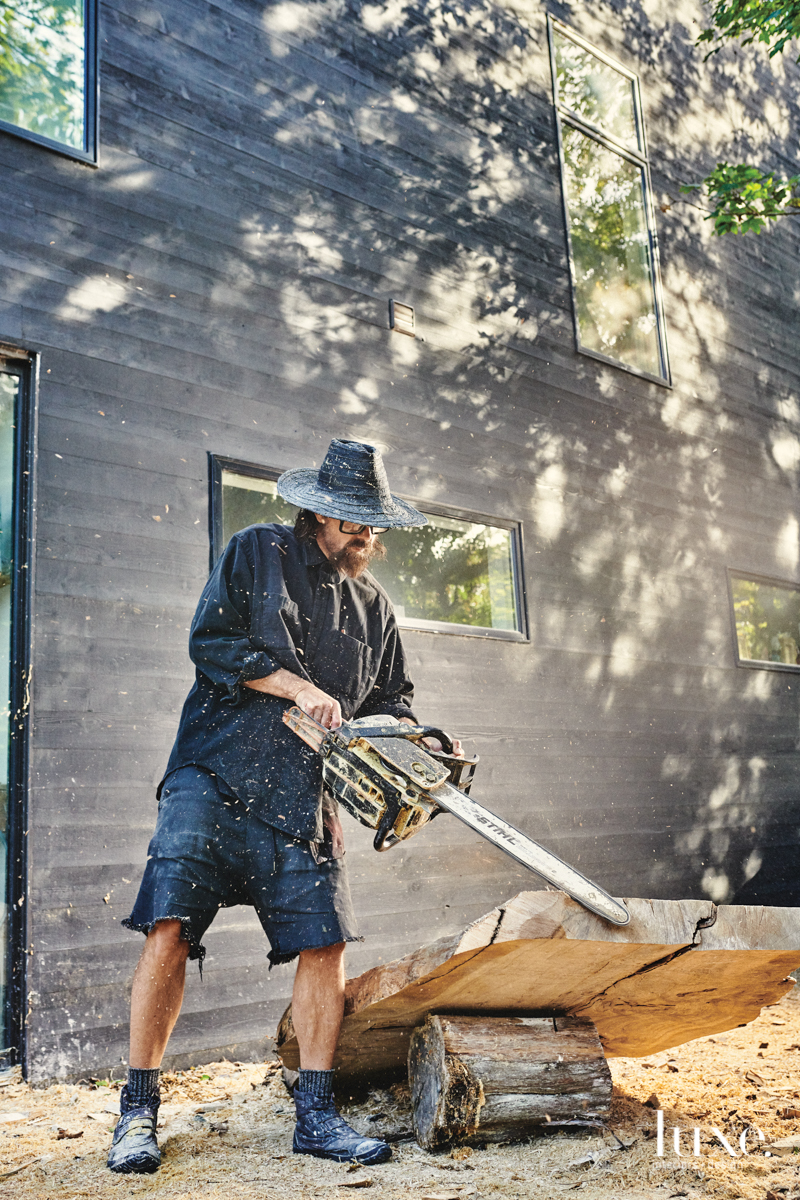 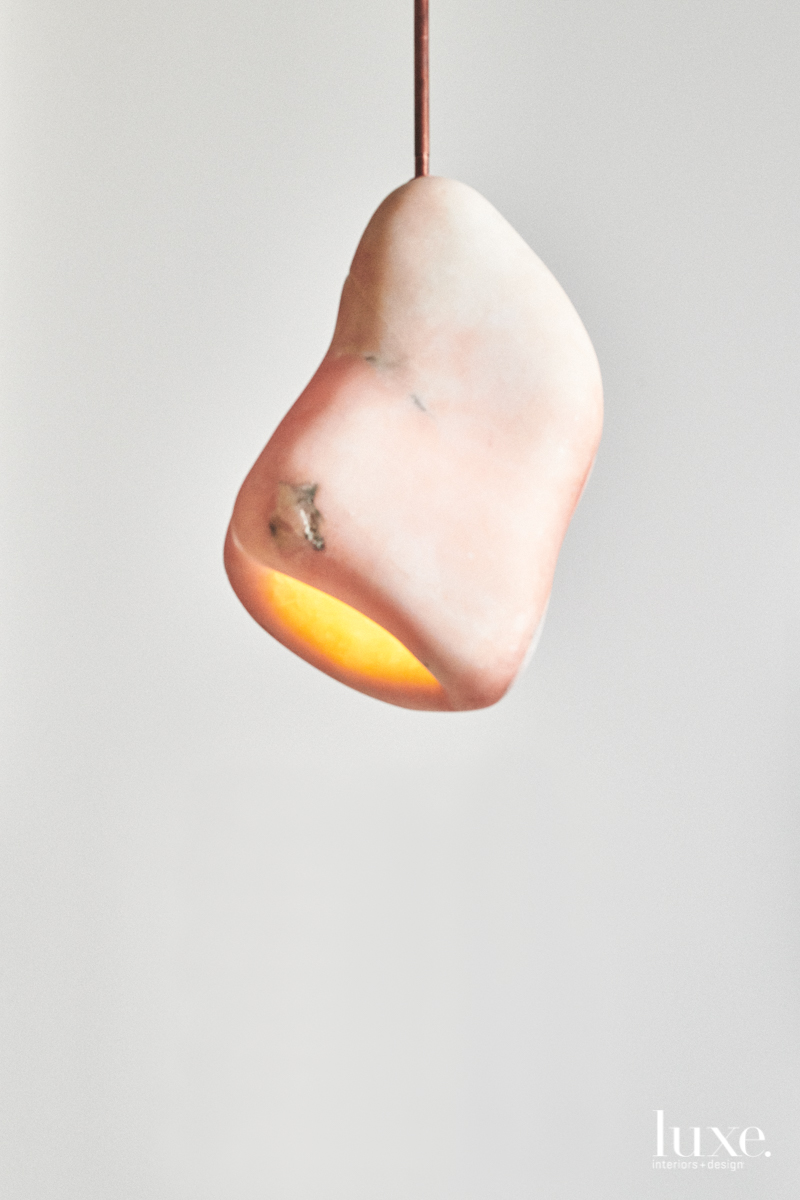 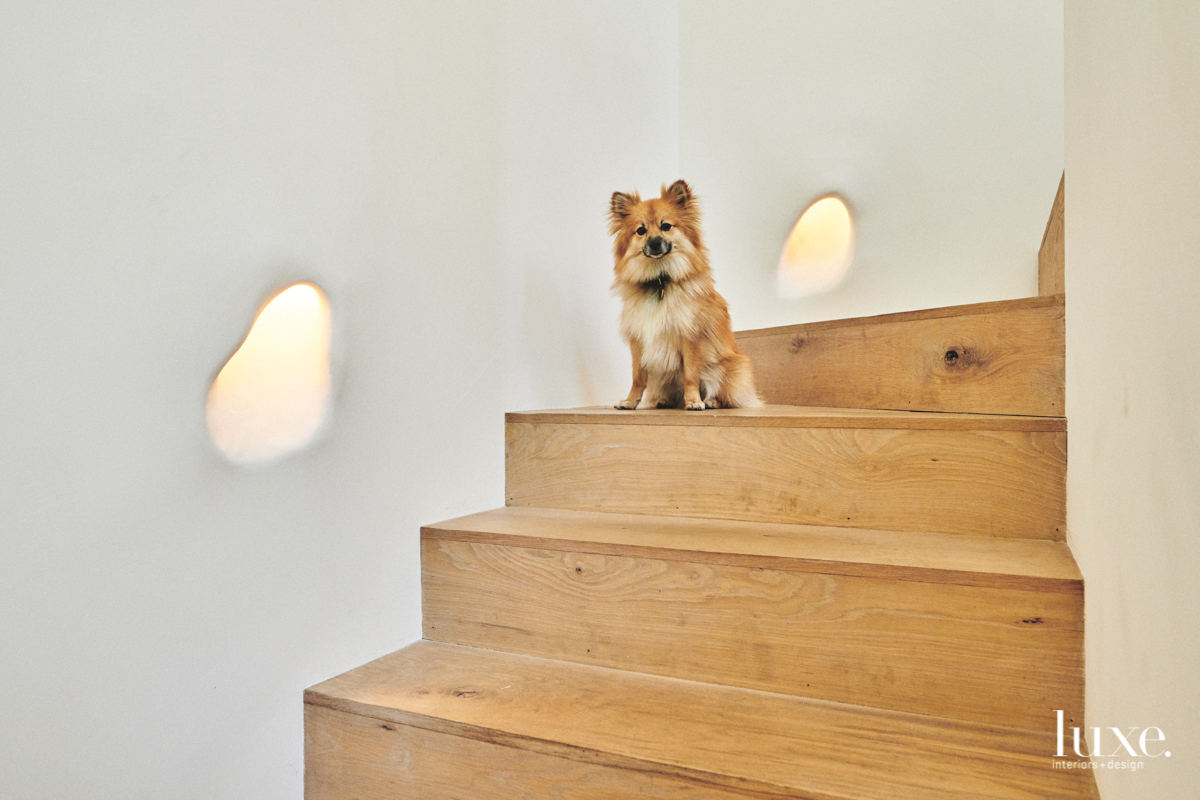 Gregory’s name likely rings a bell for people in the fashion world. He moved to New York City with dreams of being an artist, but first he took a decade-long detour into fashion design– working with Bono and Ali Hewson’s sustainable label, Edun, which earned him the 2007 CFDA/Vogue Fashion Fund award.

Despite the accolades, Gregory’s heart wasn’t in it. “I never really fit into the fashion industry,” he says. “I didn’t understand the point of fashion shows, and I was never really part of the gang. I have always been a sculptor–I was already doing it with clothing, creating all these patinas and washing and treating clothing more sculpturally.”

Now that sculpture is his primary metier, Gregory is much happier squirreled away in his home studio in Amagansett, New York. “Working by myself in the middle of nowhere is much more my style,” he says. “My influences are much more naturally occurring–formations in water, the way a tree grows, or the way snow accumulates in a drift, or my kids’ drawings, which have a naivete and randomness I find inspiring.”

Gregory taps a variety of materials for his works including wood, bronze, concrete, marble, sand, alabaster, granite and semi-precious stones. “They’re the most basic materials–ones that we’ve been using as human beings since people were making things–just reorganized in a way that makes them more sculpturally relevant now,” he says. “I’m always interested in new materials and new construction and the way to take something that’s conventional and rethink it and rework it.” His manipulations of these materials range from using a chainsaw to his bare hands, which he compares to the process of a ceramist, even though he doesn’t work with clay. “When you’re using materials such as plaster and concrete, you want to get the form while it’s in its liquid, movable, malleable state,” he explains.

While Gregory guides these materials, he also believes in letting nature take its course (no pun intended). “Ideally, I’ll draw something, but then I let the materials dictate the flow,” he says. “I don’t end up with what I started off with, because when something goes from two dimensions to three, there are a lot of other factors at play. I wouldn’t say I’m precise. I’m not a woodworker. I’m definitely an artist.”