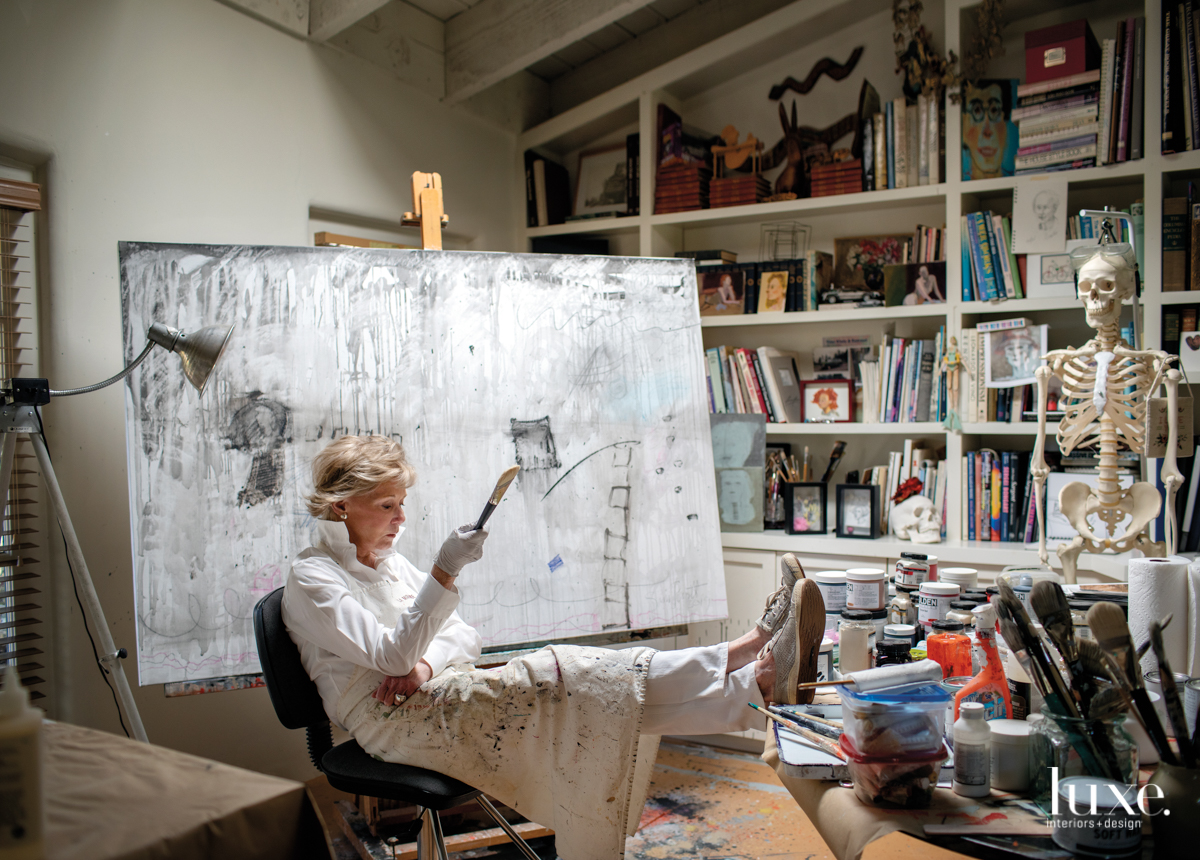 Pratt sits before a canvas in progress in her book- and art-filled studio.

If you find yourself at the symphony sitting next to painter Sam Pratt, you might have the opportunity to both hear and see the music. Pratt is a doodler, often filling the pages of a concert program with looping ink spirals and rows of crosshatching.

“I hear shapes, forms and sometimes color,” the artist says. These doodles translate on a grand scale to the canvases to which Pratt applies a variety of mediums, including acrylic, crayon, charcoal and grease pencil, effecting deeply layered visions. “You use whatever you get your hands on to get where you want to go,” she says. 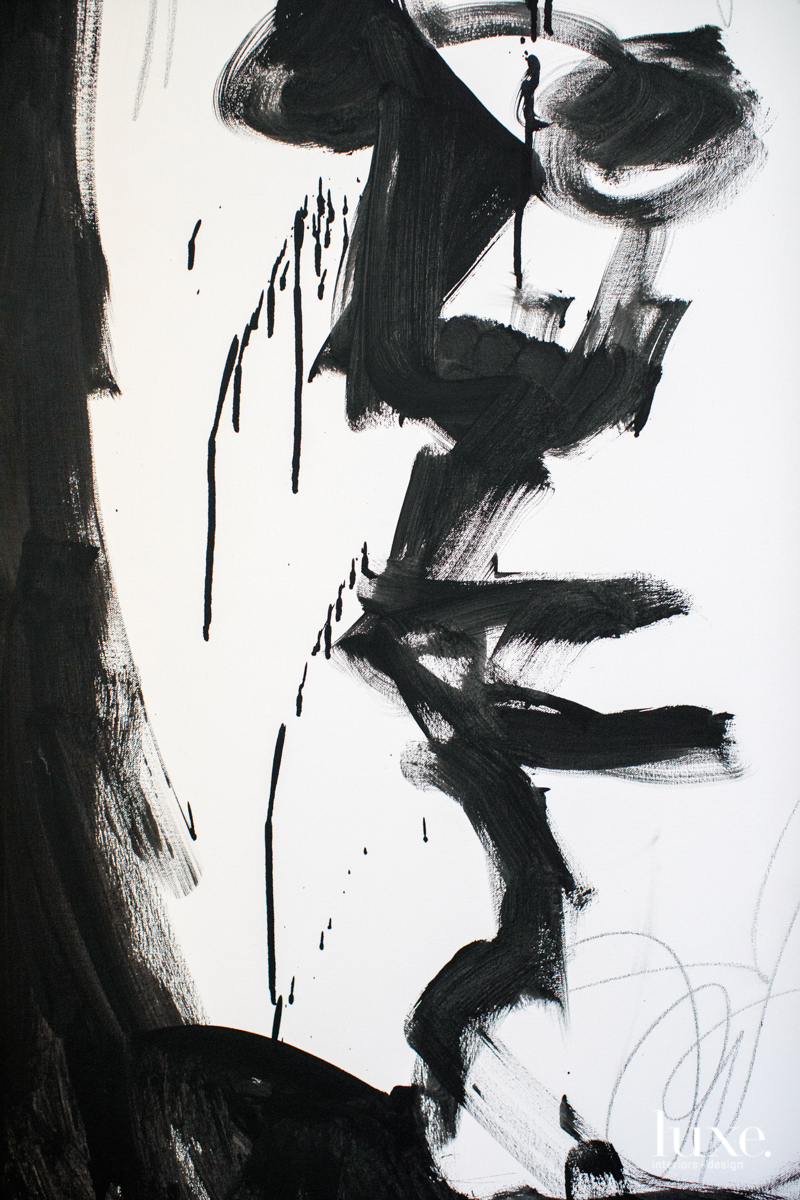 An abstract painting by Sam Pratt, made in her Paradise Valley home studio, is among her recent work.

An abstract painting by Sam Pratt, made in her Paradise Valley home studio, is among her recent work. 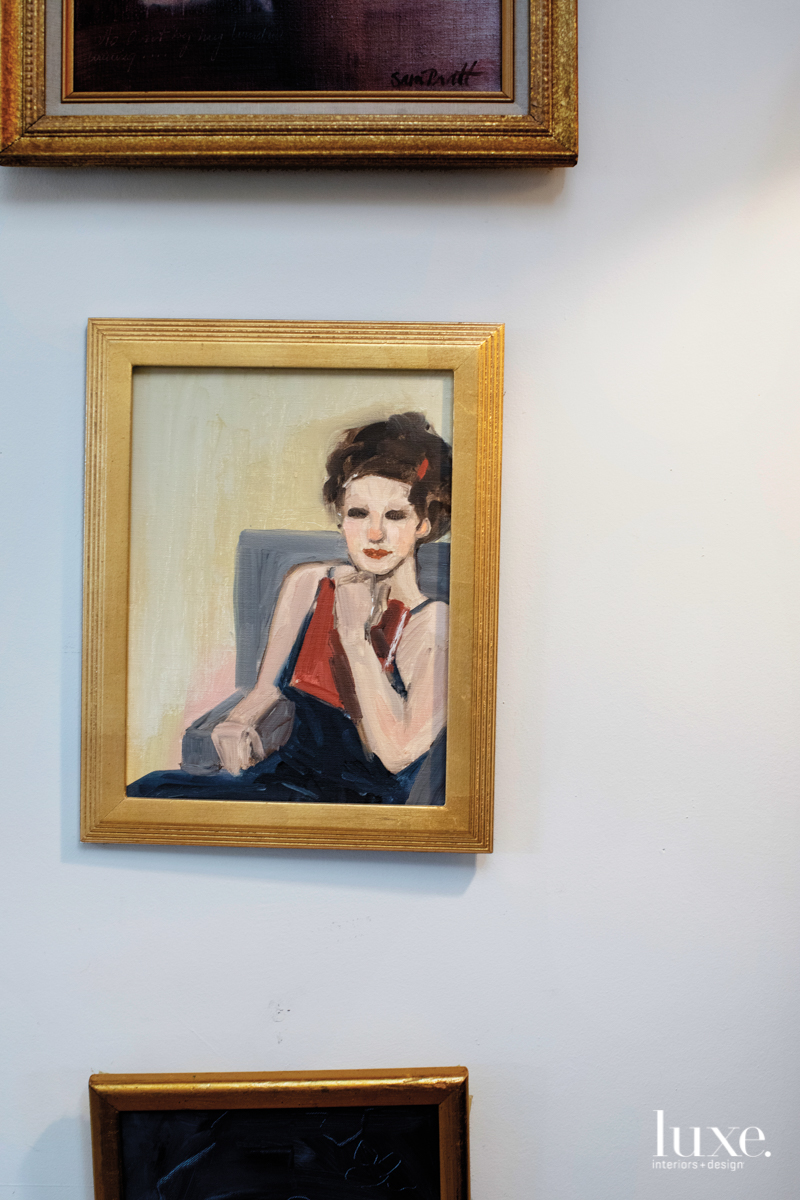 A portrait by the artist predates her current abstract approach.

A portrait by the artist predates her current abstract approach. 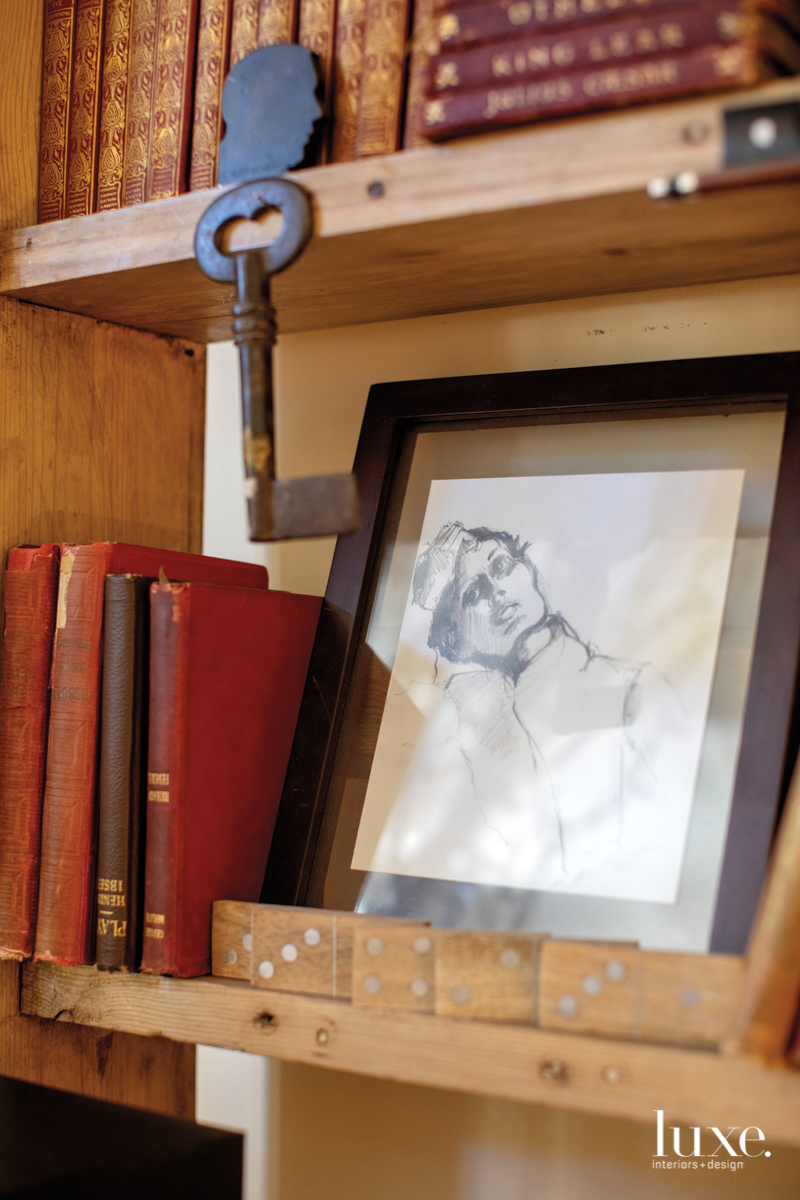 A pencil drawing rests on a shelf amid books and dominoes.

A pencil drawing rests on a shelf amid books and dominoes. 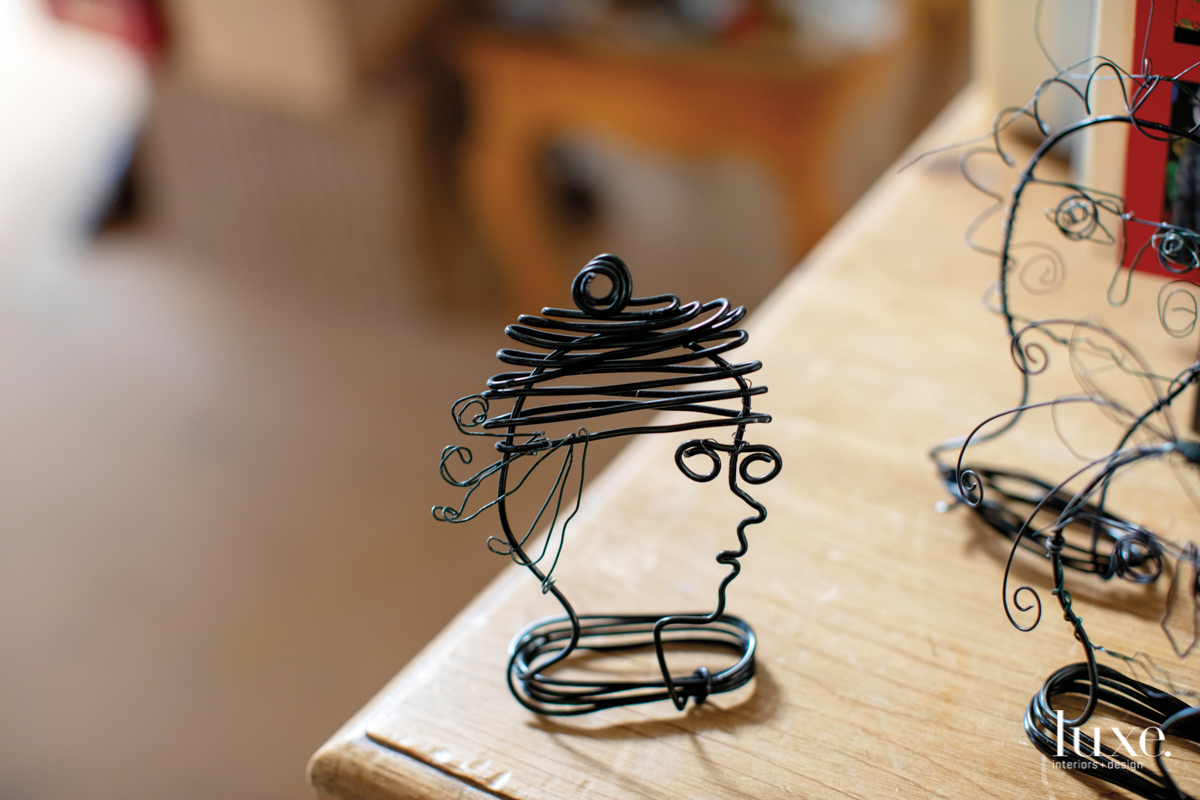 A wire sculpture head by the artist is one of a series.

A wire sculpture head by the artist is one of a series. 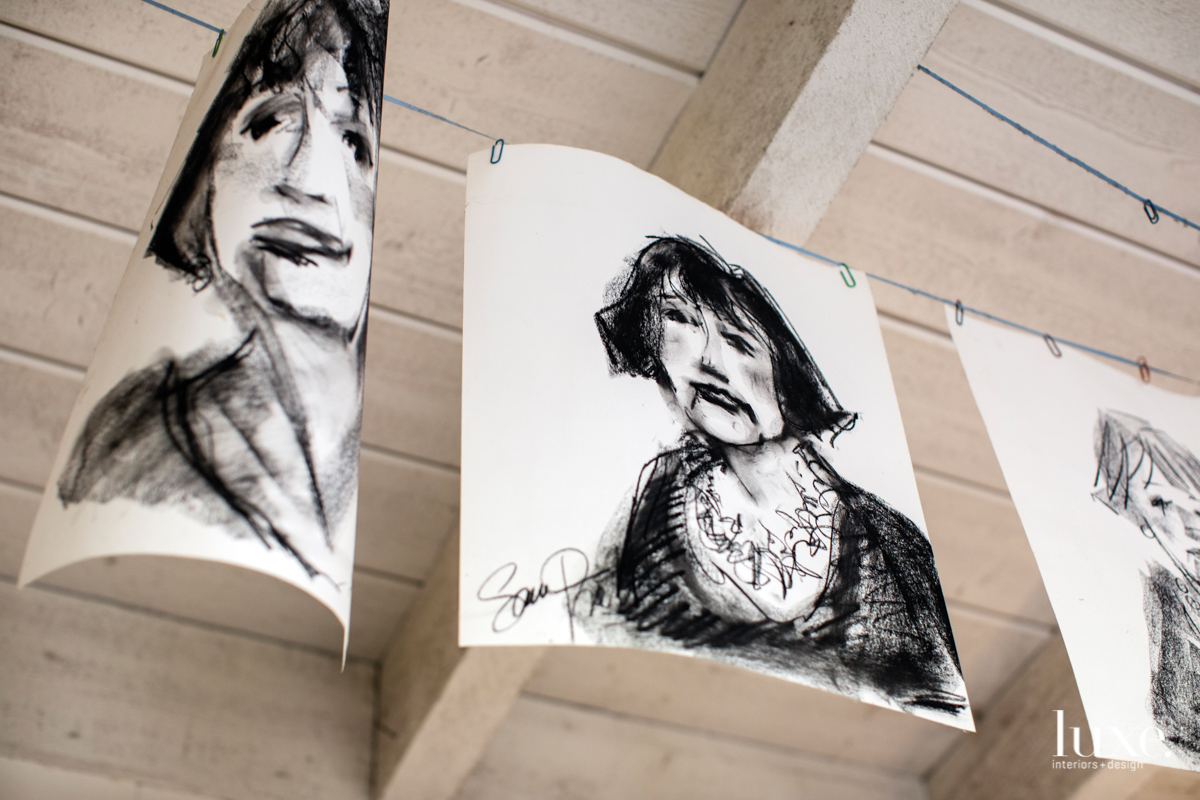 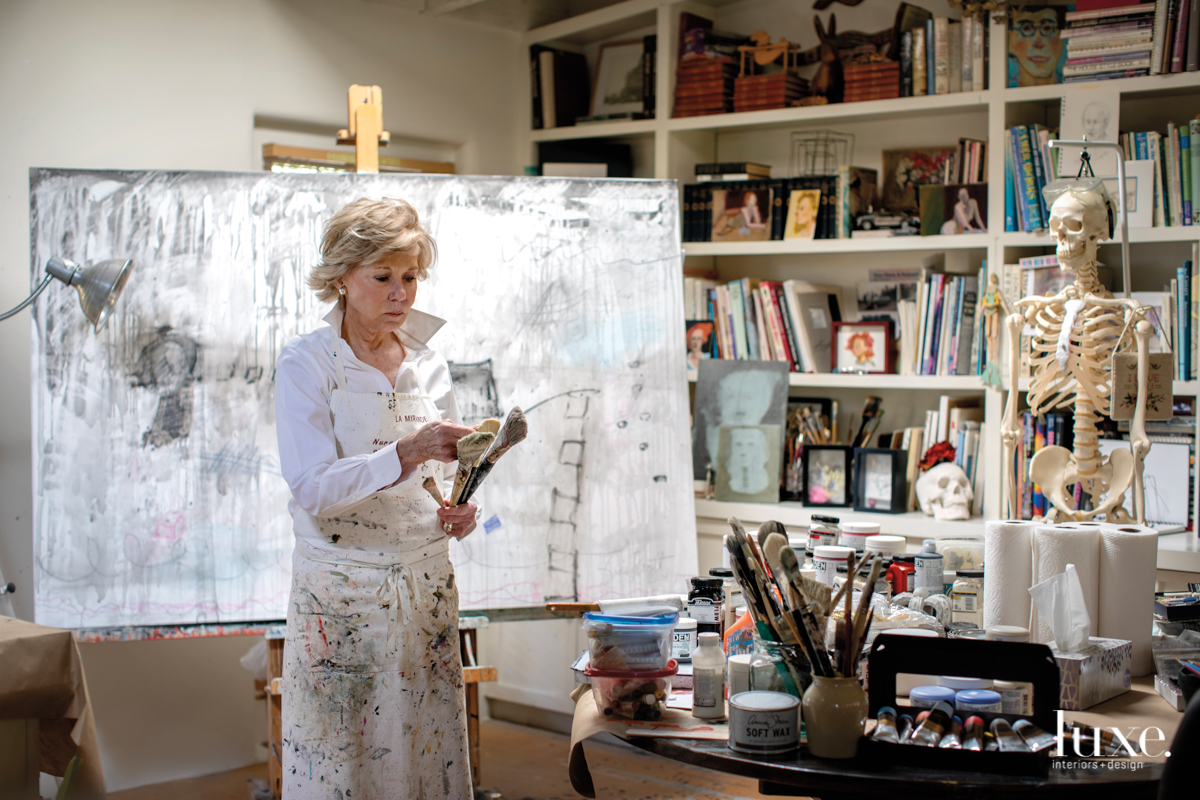 I do a lot of deconstruction--I layer paint on and lift it off," says Pratt.

I do a lot of deconstruction--I layer paint on and lift it off," says Pratt.

“There are repeat patterns everywhere,” she says. “They just seem to be part of what I do.” In her daily work, Pratt tunes the radio to the local classical station and waits for the spark to ignite. “It’s a feeling, not a plan,” she notes.

Once she begins, the paintings are an exercise in texture and contrast. Paint is laid down only to be lifted of or wiped away. It’s a process that results in a luminous transparency, as if light is being filtered through leaves or parchment. Though velocity is evident in the imprint of the brush bristles or a groove left by a pencil racing through damp pigment, the finished paintings manage to capture delicate moments of stillness.

Early recognition of Pratt’s artistic skill led to art school and eventually a career in portraiture. A decade-long shift toward abstraction has been motivated by her need to express not only what we see, but what we “hear on a deeper level.” Primary influences such as Mary Cassatt and Nicolai Fechin continue to enrich her work even as she moves away from realism. “You’re not going to see these people directly,” Pratt says, “but they are there in the movement.

“This mental accumulation of inspiration is mirrored by the material objects in Pratt’s studio, an annex of her Paradise Valley residence. Whitewashed shelves are home to stacks of art books, carved ornaments and even a discarded gum wrapper cut into a tiny string of paper dolls. Wide windows frame a view of Camelback Mountain and French doors open onto a courtyard. It’s a light-flled space of artful disorder and music–always music. “An artist lives in a world that other people don’t always live in,” Pratt says. “It’s my job to communicate what I see from where I am.”