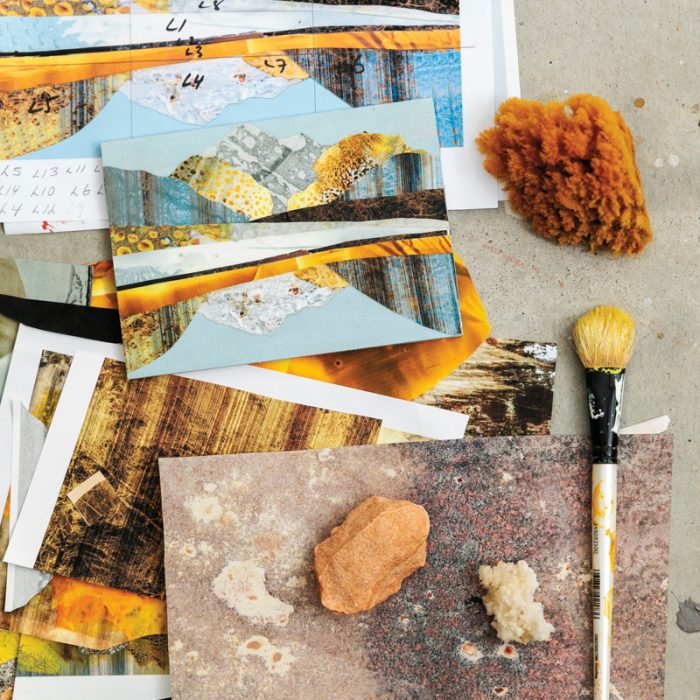 For Morrison, Colorado-based artist Sarah Winkler, being outside is as important as putting paint to canvas. “I love that as a landscape painter you get to climb mountains, walk trails and be in nature as part of your job,” she muses. “I get such pleasure from being outdoors and I want to pass that on.”

Winkler’s landscape paintings push far beyond the traditional, exploring the intersection between geology and history. Her interest in the concept of how landscapes change over time was first sparked in college and, after she moved West two decades ago, it grew exponentially. “It is fascinating to be around the mountains and living in nature,” she says. “The geology is really exposed out here.” 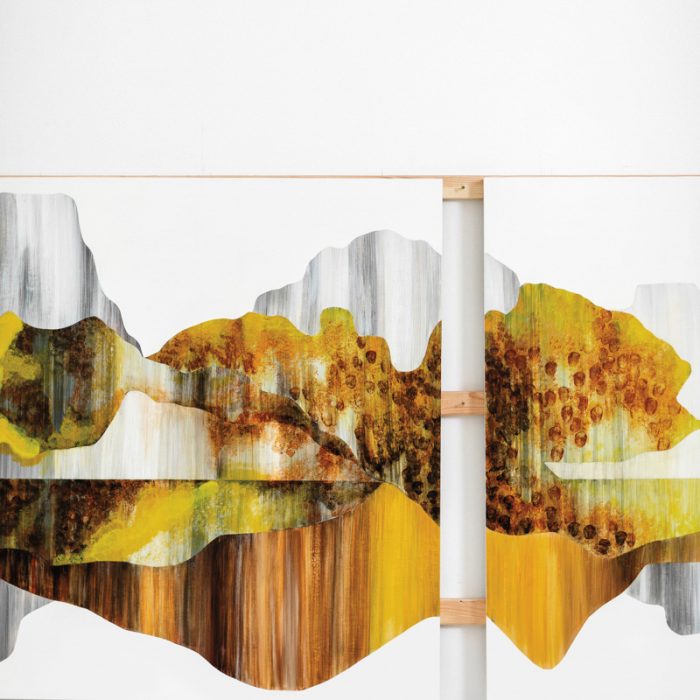 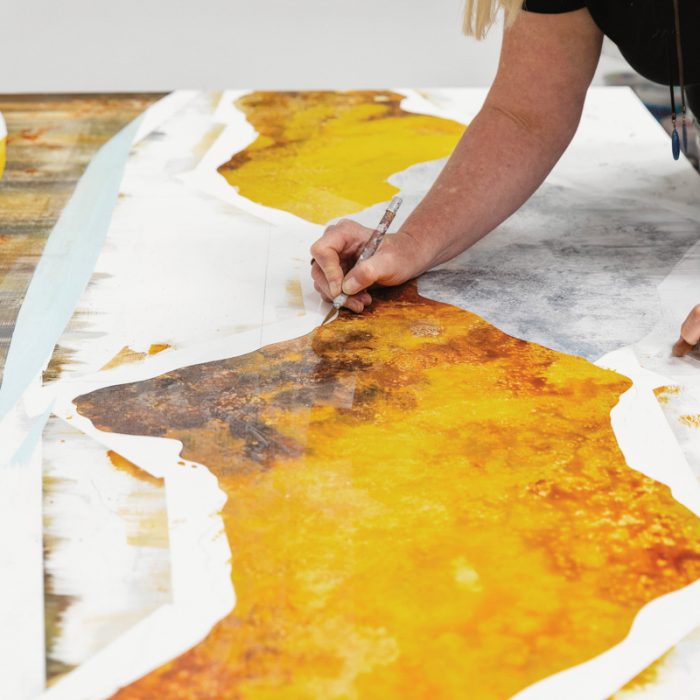 Artist Sarah Winkler adds detail to one of her large-scale paintings.

Artist Sarah Winkler adds detail to one of her large-scale paintings. 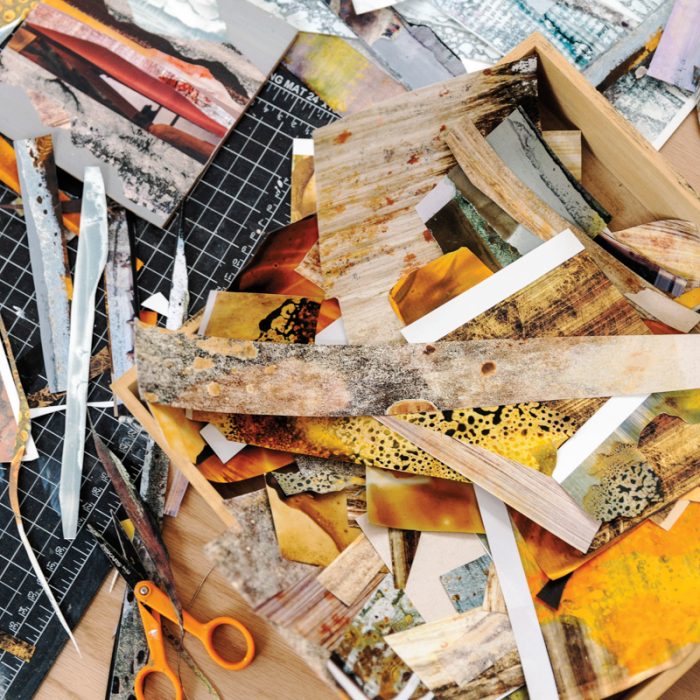 Her artwork begins when she collages various textures as a starting point.

Her artwork begins when she collages various textures as a starting point. 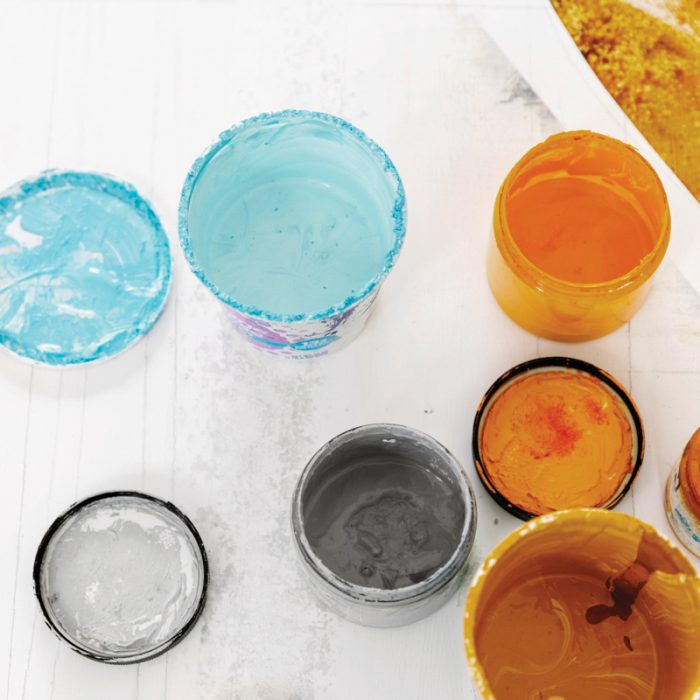 Tubs of color wait to be applied to canvas.

Tubs of color wait to be applied to canvas. 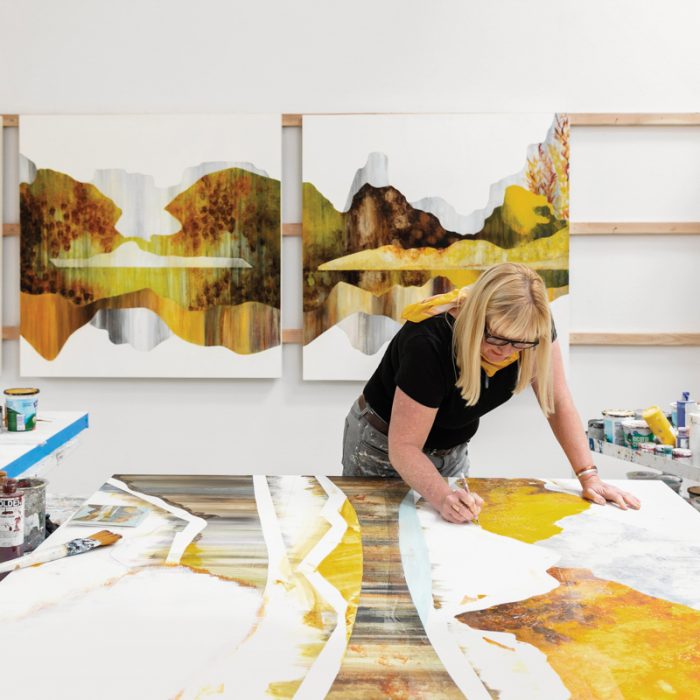 Winkler gets works in her studio.

Winkler gets works in her studio.

Her intent is to capture the many layers of her surroundings. “I like the artwork to be as complex as the landscape itself,” she says. “It starts with me getting interested in a certain area and then traveling there. Being in the landscape and experiencing it is very important.” After a visit to a location, where she photographs and draws the scenery–“I’m trying to memorize the shapes and lines,” she says–Winkler researches how the topography was formed. “I think of ways to mimic that in the art process,” she explains. “I view the art process as very similar to the landscape formation process.”

Fusing her research with experimentation, Winkler creates small-scale collages to work out her compositions. She’ll create a multitude of these collages, but only one or two of those will have a “wow factor,” she says, and those serve as the basis for what will eventually become her large-scale paintings. In her latest work, the artist has started incorporating crushed minerals and rocks–think marble dust, pink granite or sandstone. The size of her pieces (many of which are 60-by-60 or larger and take two years to complete) are a purposeful nod to the vast expanses in the natural world. “I’m trying to recapture that feeling when you first see something like the Grand Canyon or Pike’s Peak,” Winkler explains. “I really love working large because I think it has that impression.”

The impact of sudden geologic occurrences (such as flash flooding or an earthquake) plays a part in Winkler’s work. In a recent show, “Monumental Duality,” at Sugar Cube (CK) gallery in Denver, she explored the idea that ancient landscapes are shaped through a series of unexpected cataclysmic events. And her recent series “Smoke Signals” focuses on the massive impact the California wildfires have had on the Western landscape, serving as a reminder to viewers about the effect humans have on the earth.

“Sometimes I’m at odds with contemporary culture,” Winkler observes. “I see people spending 90 seconds in front of a natural feature just to take a selfie.” But she remains determined to reveal the greater beauty and history (both ancient and not-so-ancient) of our world: “I’m inspiring people to care about the earth, and to respect it and take care of it.”