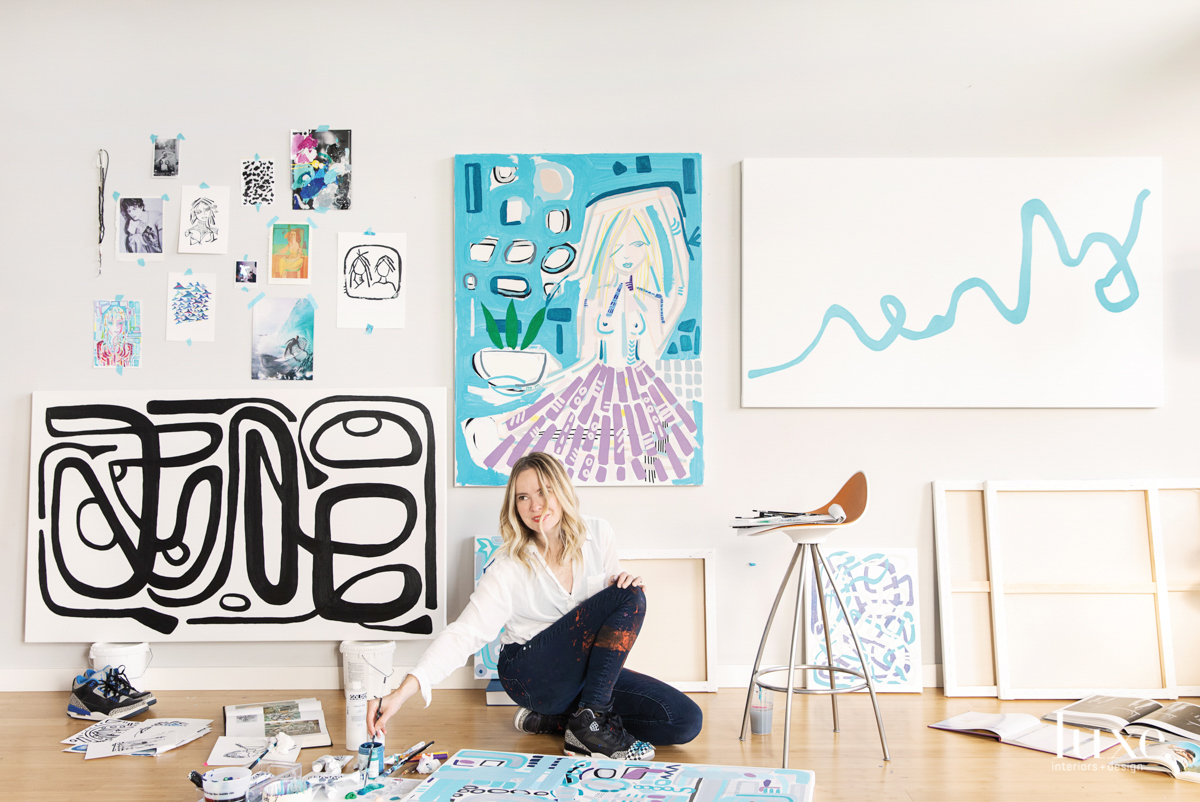 Seattle-based artist Kate Neckel has never been one to color inside the lines. Never is that more evident than when she’s covered in paint and rocking onstage with legendary Pearl Jam guitarist Mike McCready, her partner in the creative collaboration dubbed Infinite Color and Sound. 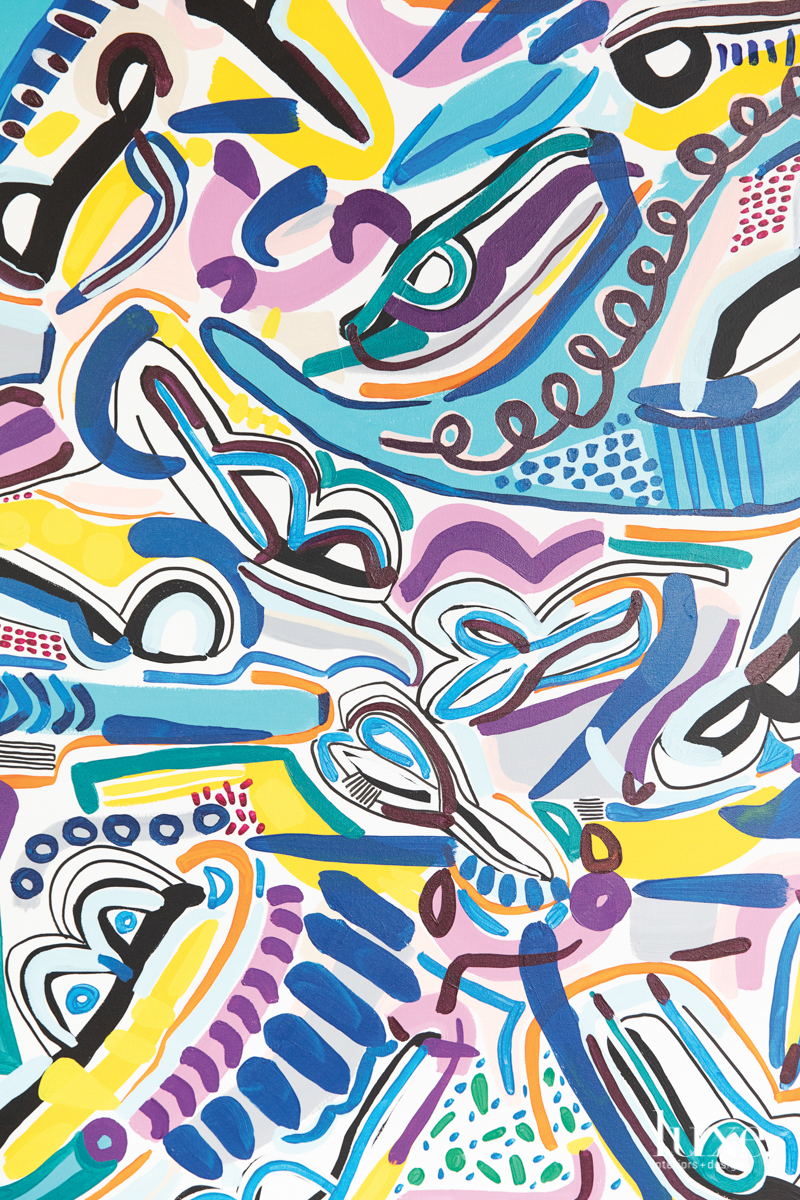 Since moving to Seattle and embarking on a creative partnership with Mike McCready, her work has taken a turn for the abstract.

During their performances, Neckel does double duty, singing original songs and some covers while painting live on canvases, objects and even bodies—often all at once. “Music moves me deeply. I’ve always been inspired by music and musicians, but I didn’t see it as a medium for my own expression until this collaboration with Mike,” she shares. 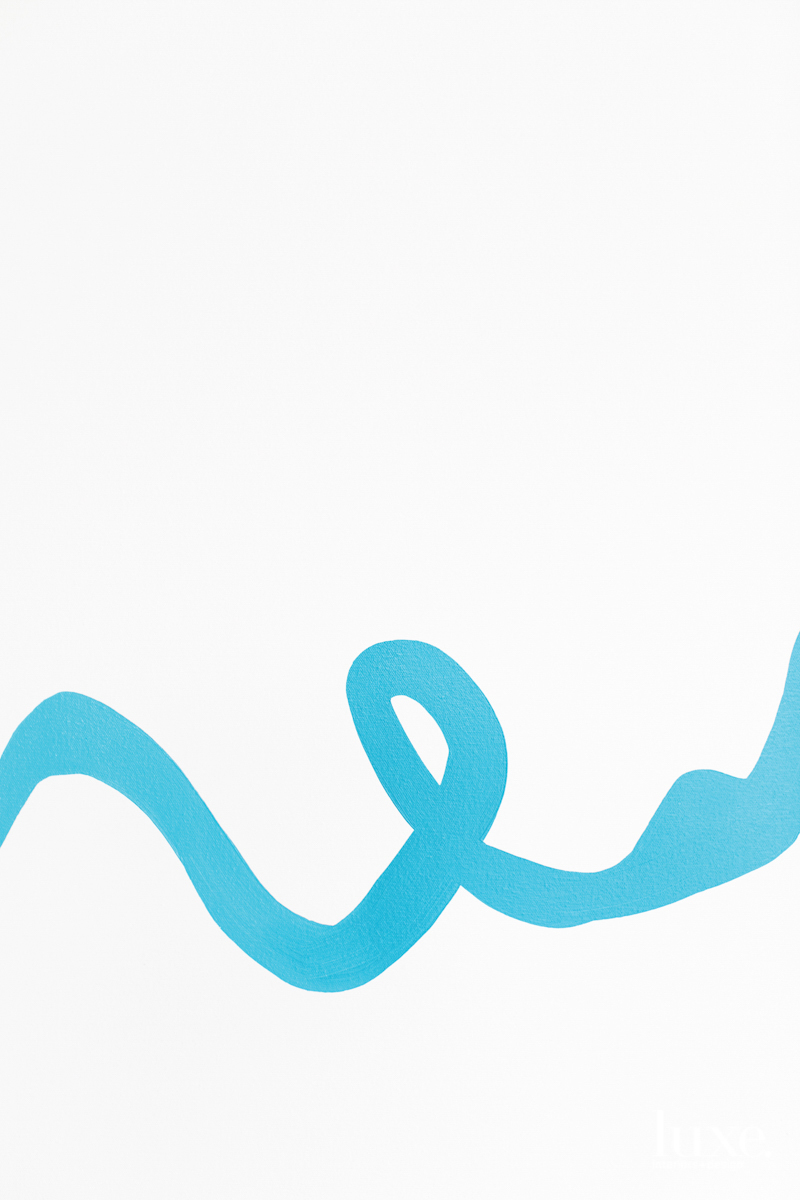 A close-up shows the rich gestures in her paintings.

Launched in 2018, this project marks the latest creative chapter for the artist, who is known for her energetic line paintings and drawings. Since moving from New York (her home for 16 years) to Seattle nearly four years ago, Neckel’s work has evolved. In addition to inspiring her to compose music—she keeps a guitar handy in her studio for impromptu song-writing sessions—the change of scenery has worked its way into the gestures and hues of her work. In New York, much of Neckel’s oeuvre was in Pigma Micron pens and acrylic paint markers and seemed to evoke the city’s kinetic energy; after she moved west, the pace and serene views of nature “slowed me down,” she notes. “The lushness of Seattle definitely stirred something in me that called for paint and canvas.” And her lines became more abstract. “I paint what I feel inside of me,” she says. 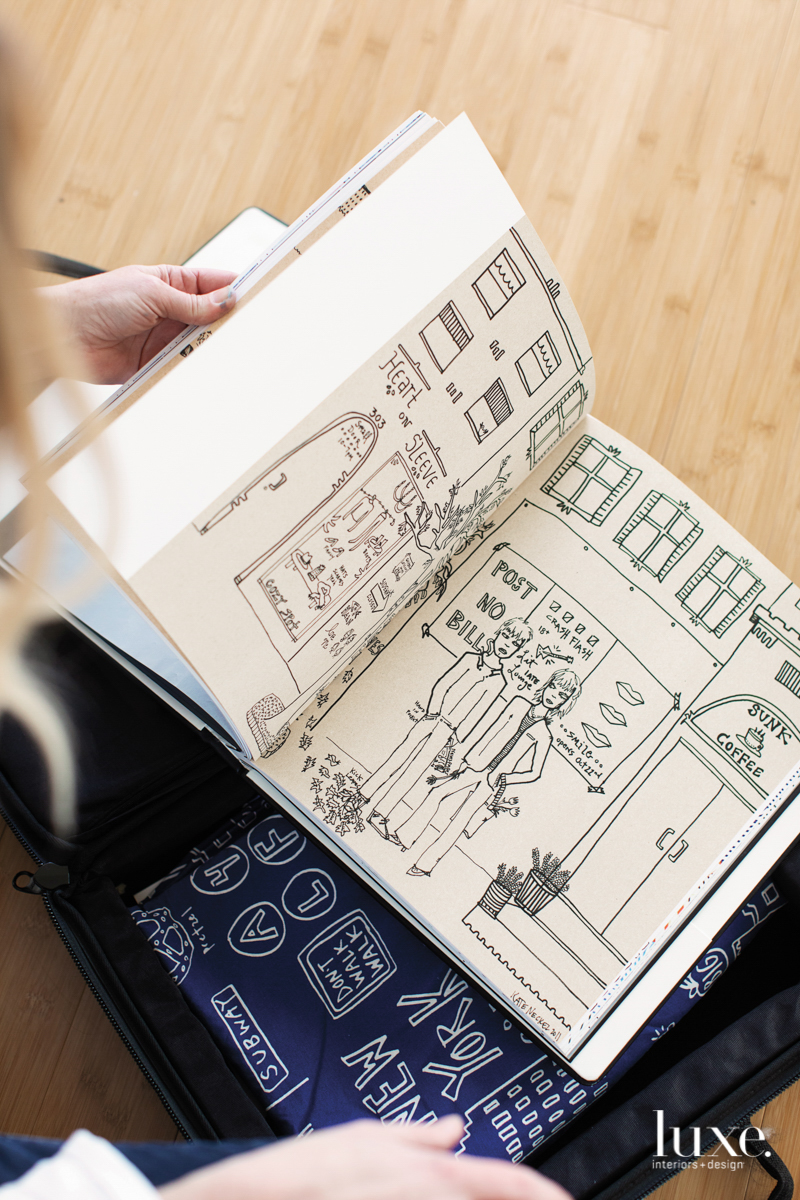 The artist pages through a book of some of her earlier illustrations.

Composing and performing with McCready has added a new rhythmic dimension to her latest pieces. Onstage, responding to their music and the energy of the crowd, says Neckel, “The paintings I make with Mike are very loose and wild, splashing paint all around.” Back in the studio, her process is similar in that she works from feeling and doesn’t sketch out a plan ahead of time. “But when it’s just me,” she explains, “the energy goes right to the canvas and not to Mike or Polaroids or the crowd—it’s more focused.” Working with this new, emerging style, “I’m refining my language and homing in on precisely what I want to say,” says Neckel. “They’ve become visuals of what it feels like to open my mouth and let the sounds out and of how it feels to push my pick along the strings of the songs that I write. I feel like I’ve been cracked open.” 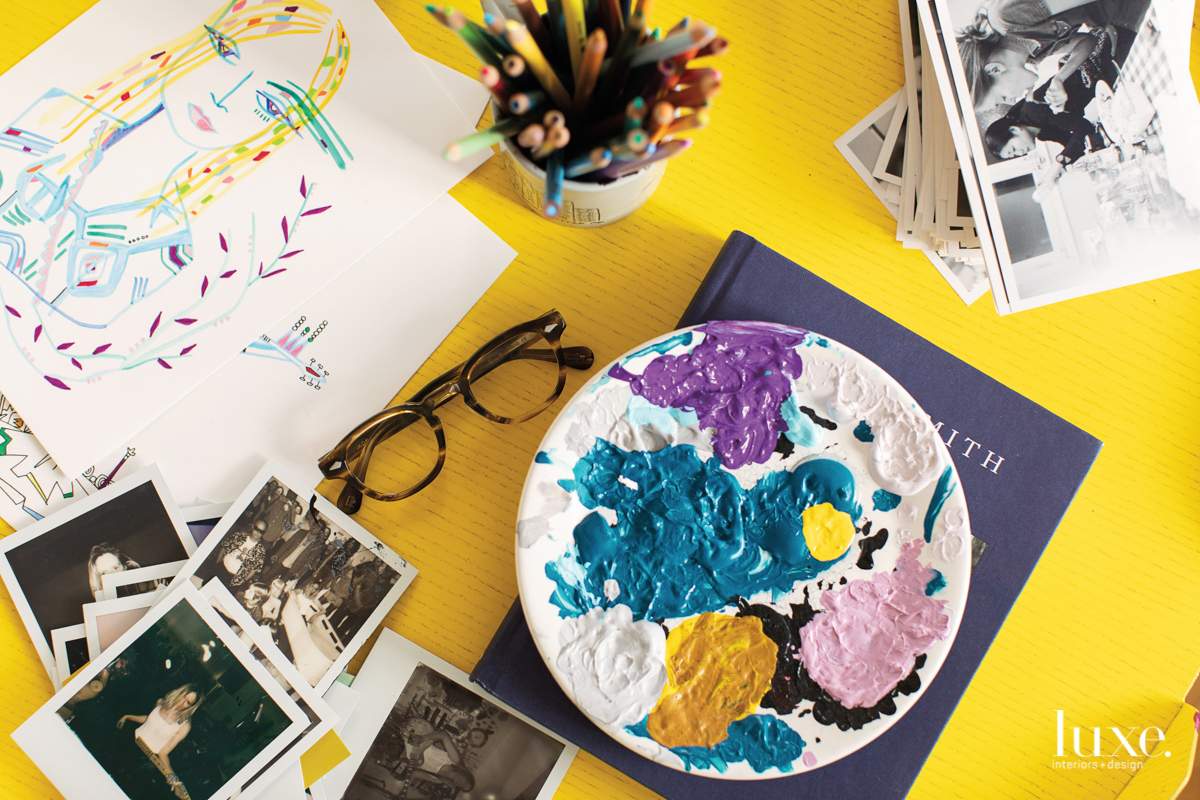 A surface in Neckel’s studio holds a collection of items, including, drawings, paint and photographs. 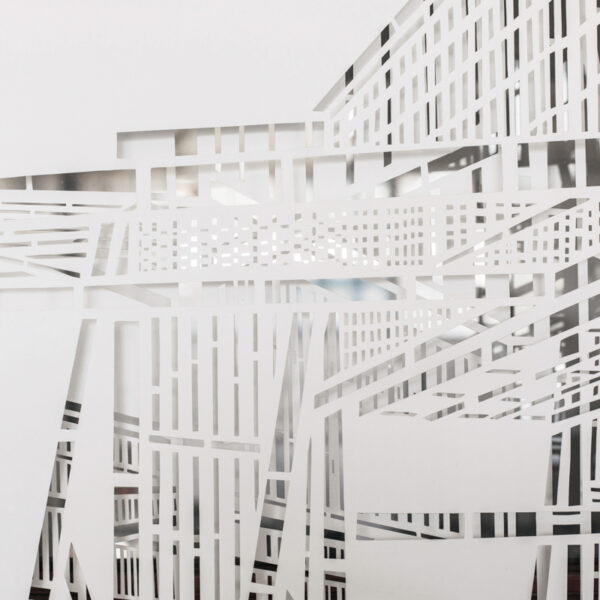 From Teeny To Giant, These Architecturally Inspired Paper Creations Wow 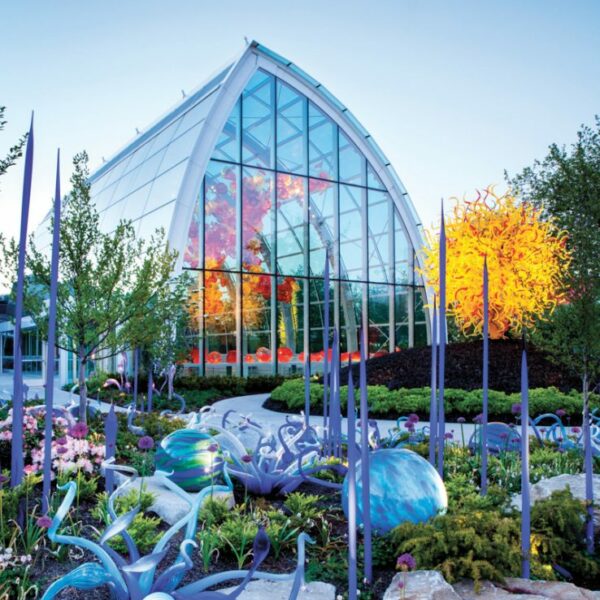 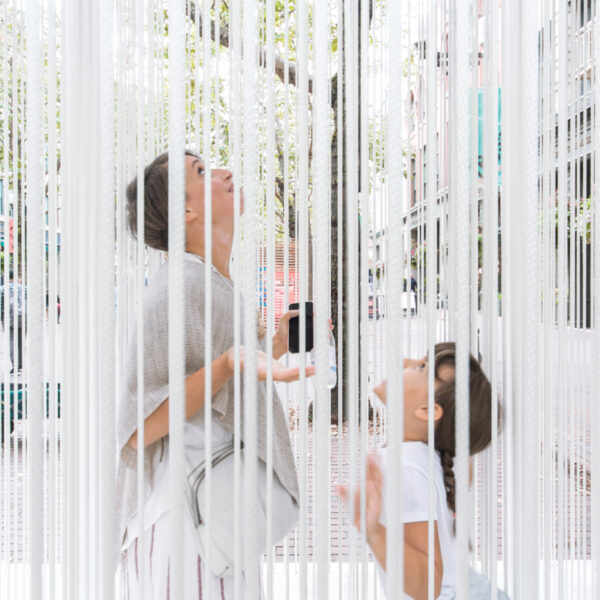 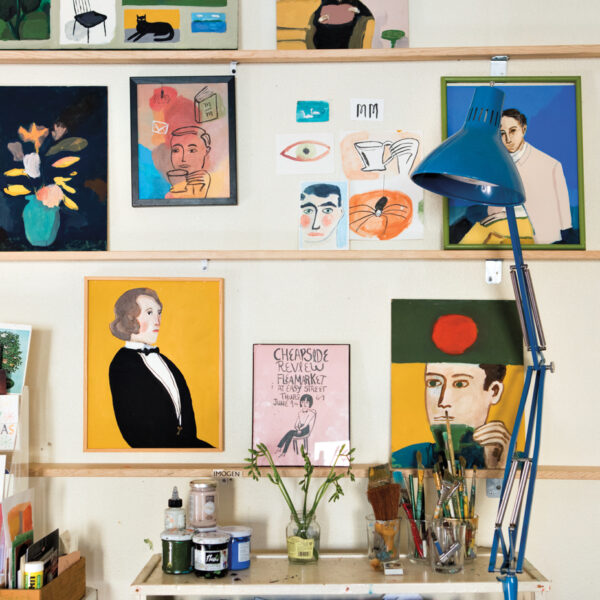 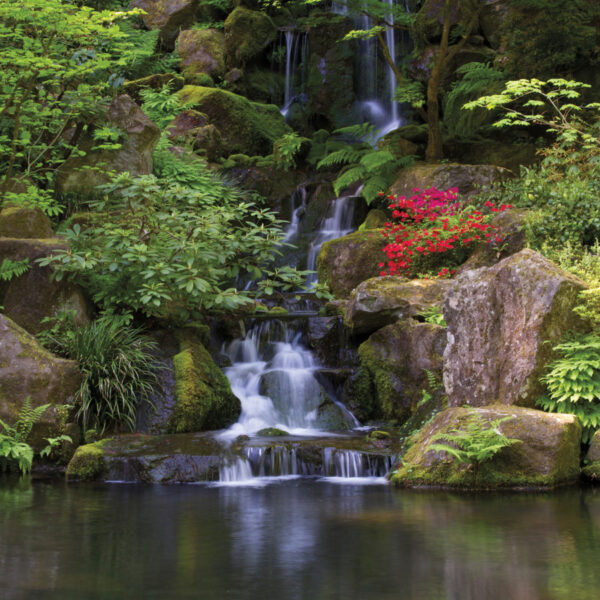