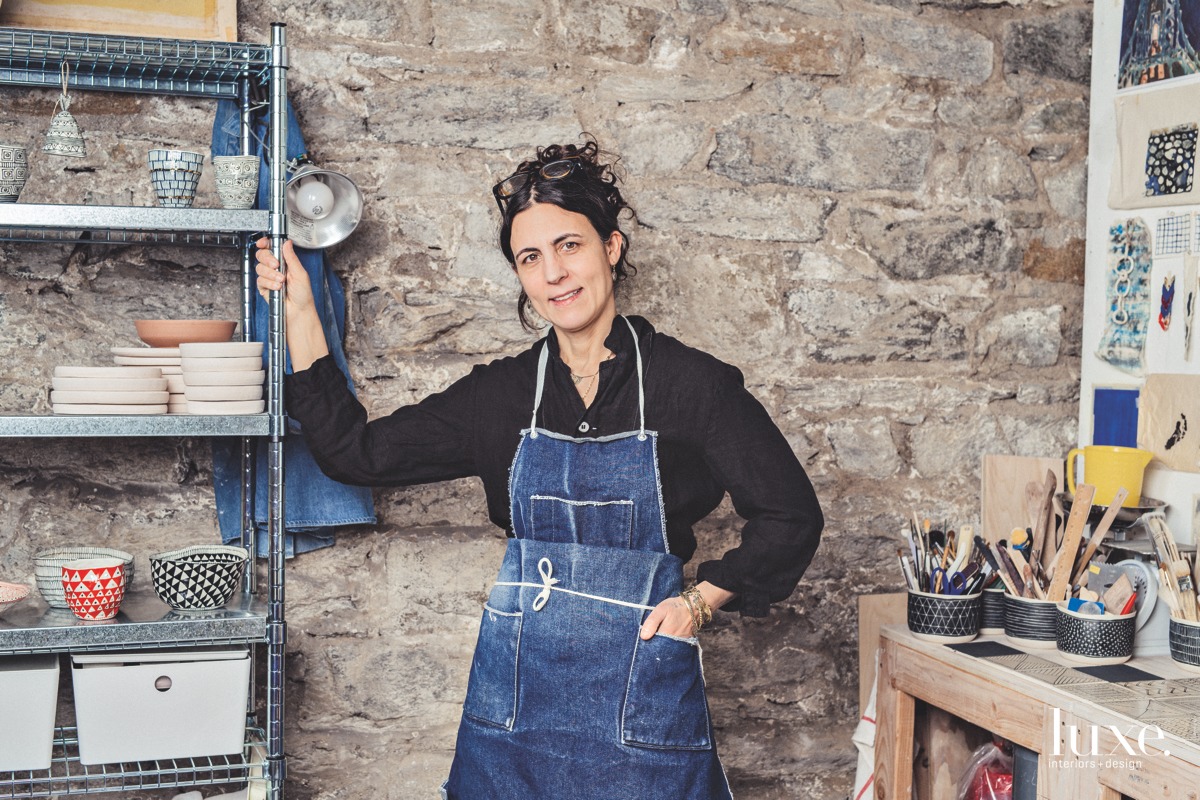 Ceramicist Suzanne Sullivan begins every morning with a ritual: “I have to start the day with coffee in a large handle-less tumbler I made probably 10 years ago,” she says. It’s the first part of a daily schedule that involves teaching preschool and high school students, followed by walking to her studio in Red Hook, Brooklyn–where, the artist puts it, “I work until I can’t anymore.” Following a cup of afternoon chai tea, it’s time to head home. 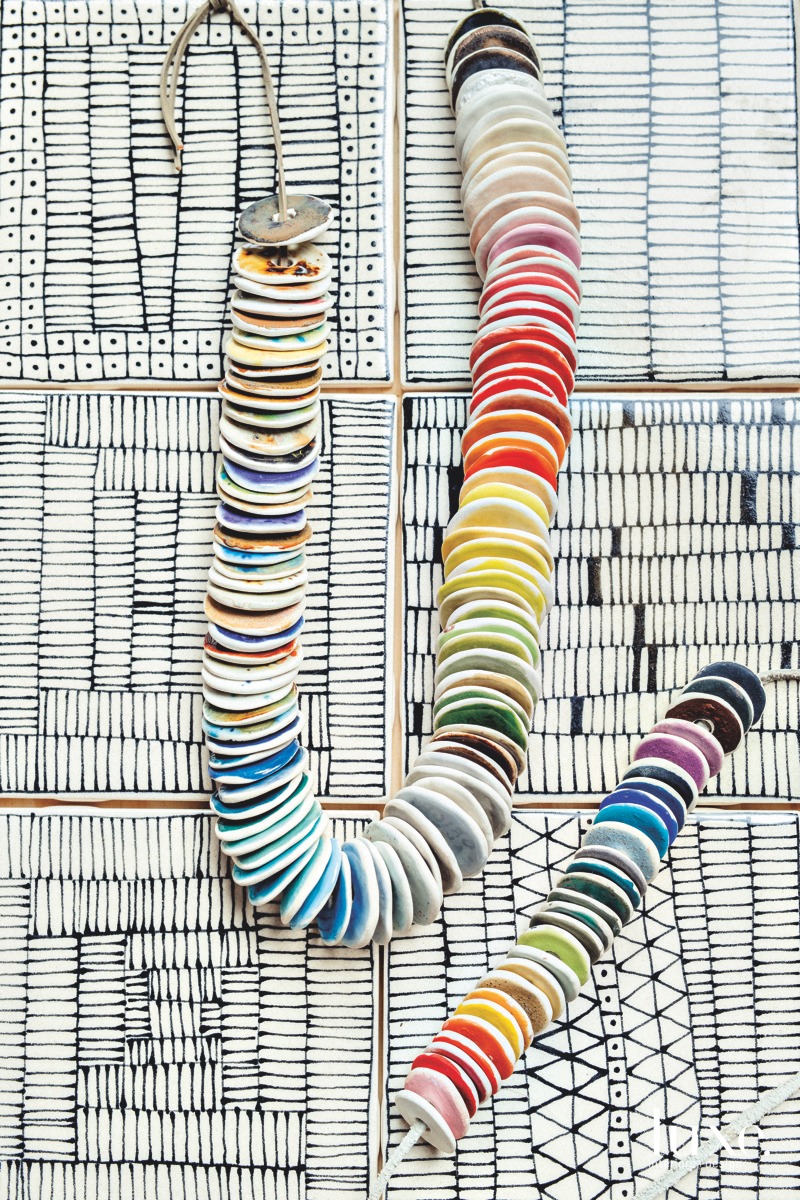 A strand of glaze samples upon her handmade tiles.

A strand of glaze samples upon her handmade tiles. 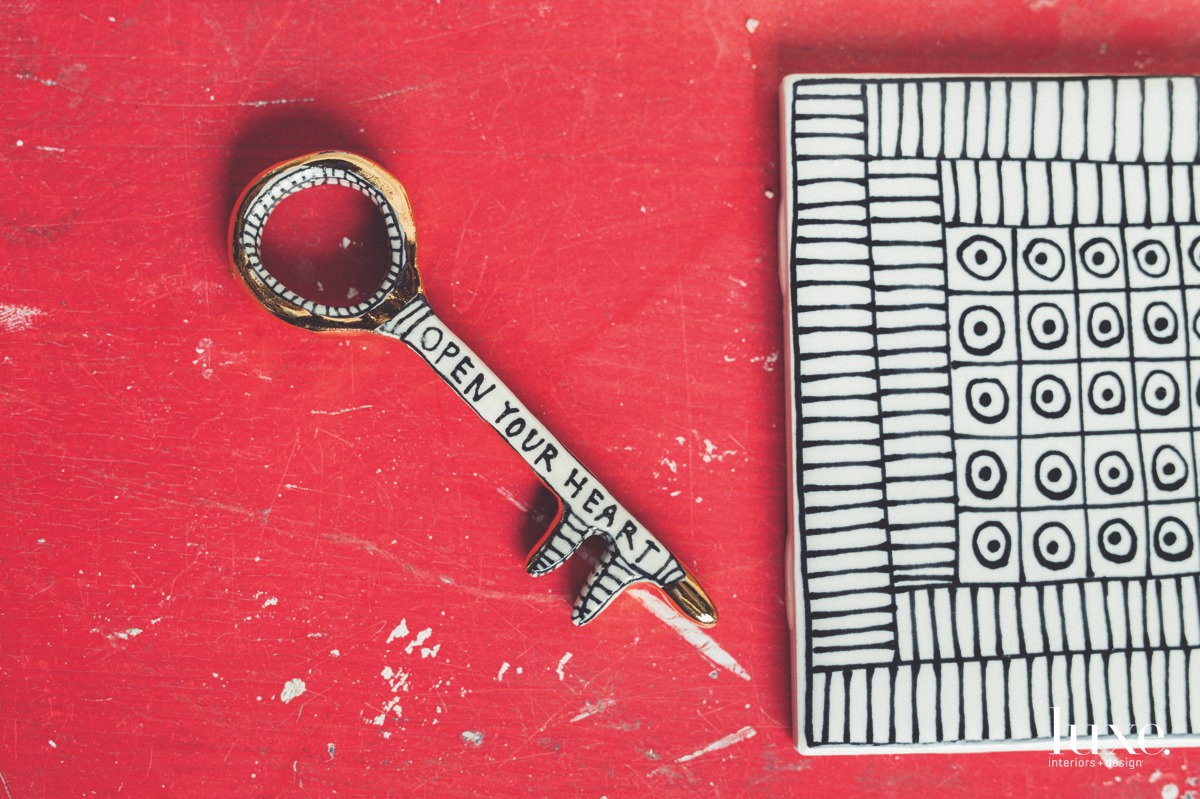 A porcelain-and-gold key was made as a gift.

A porcelain-and-gold key was made as a gift. 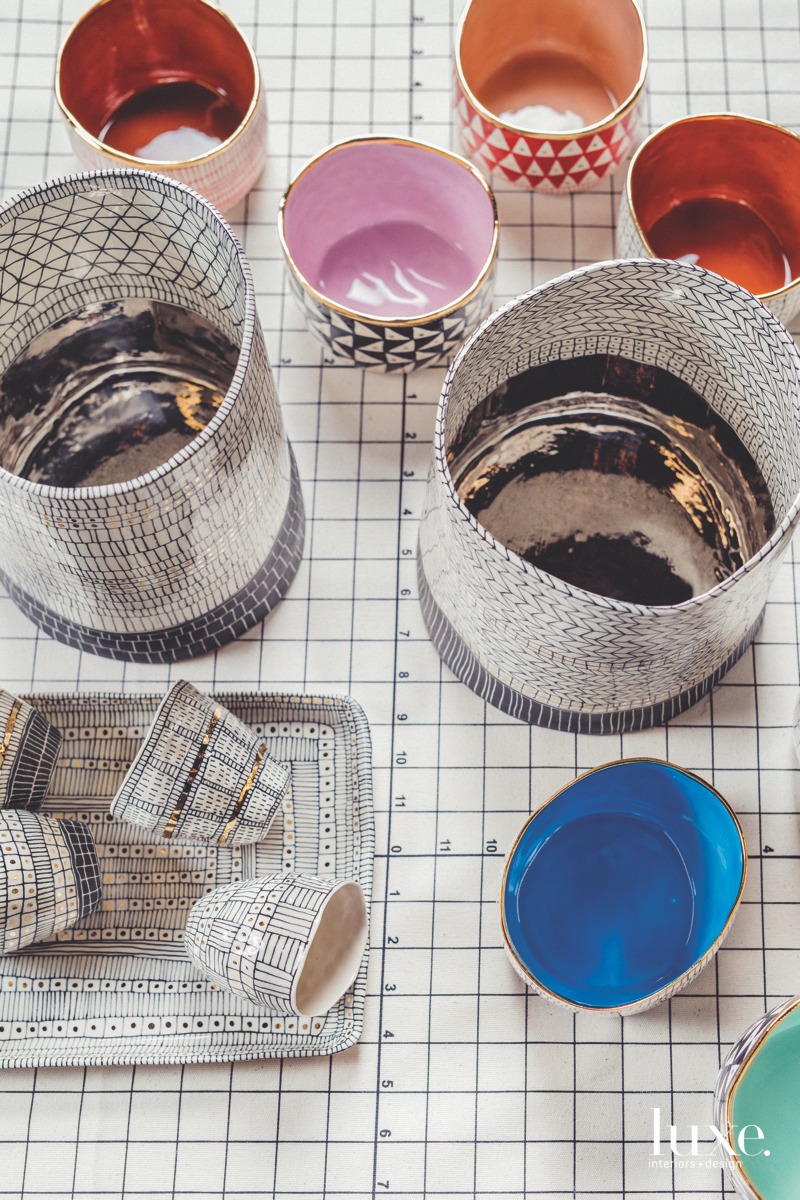 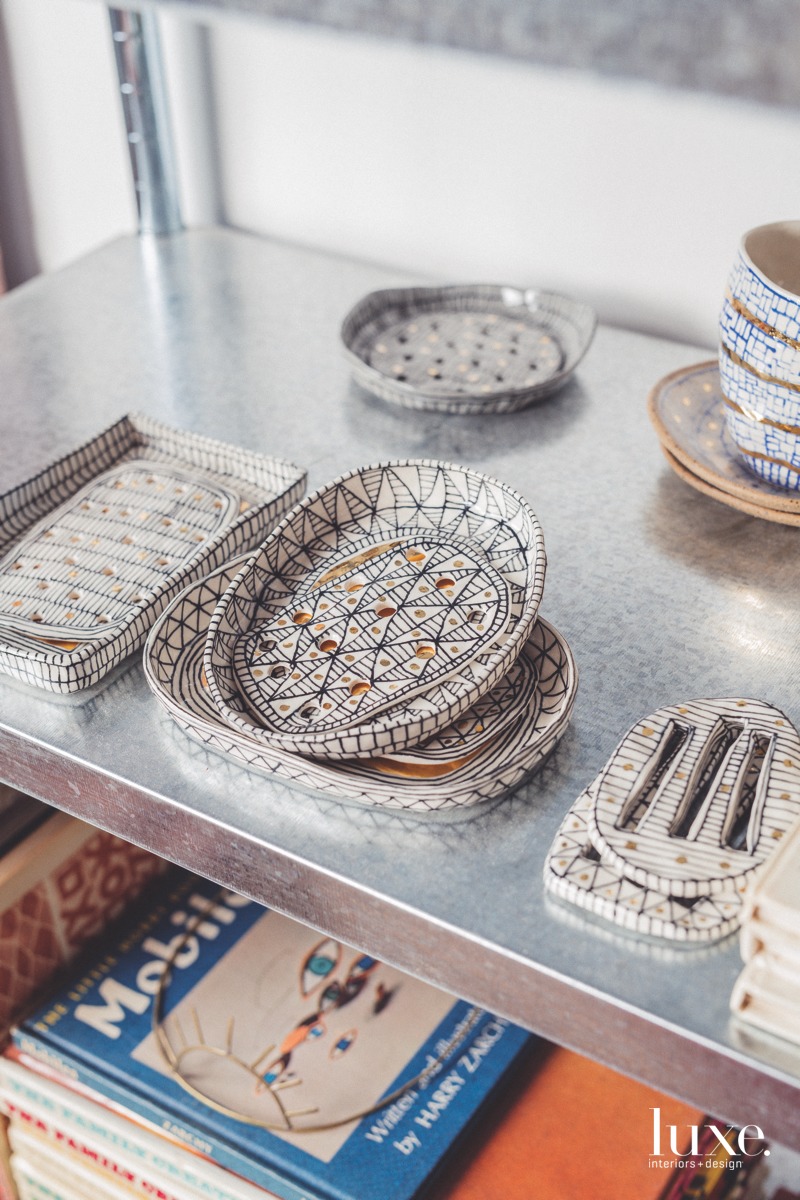 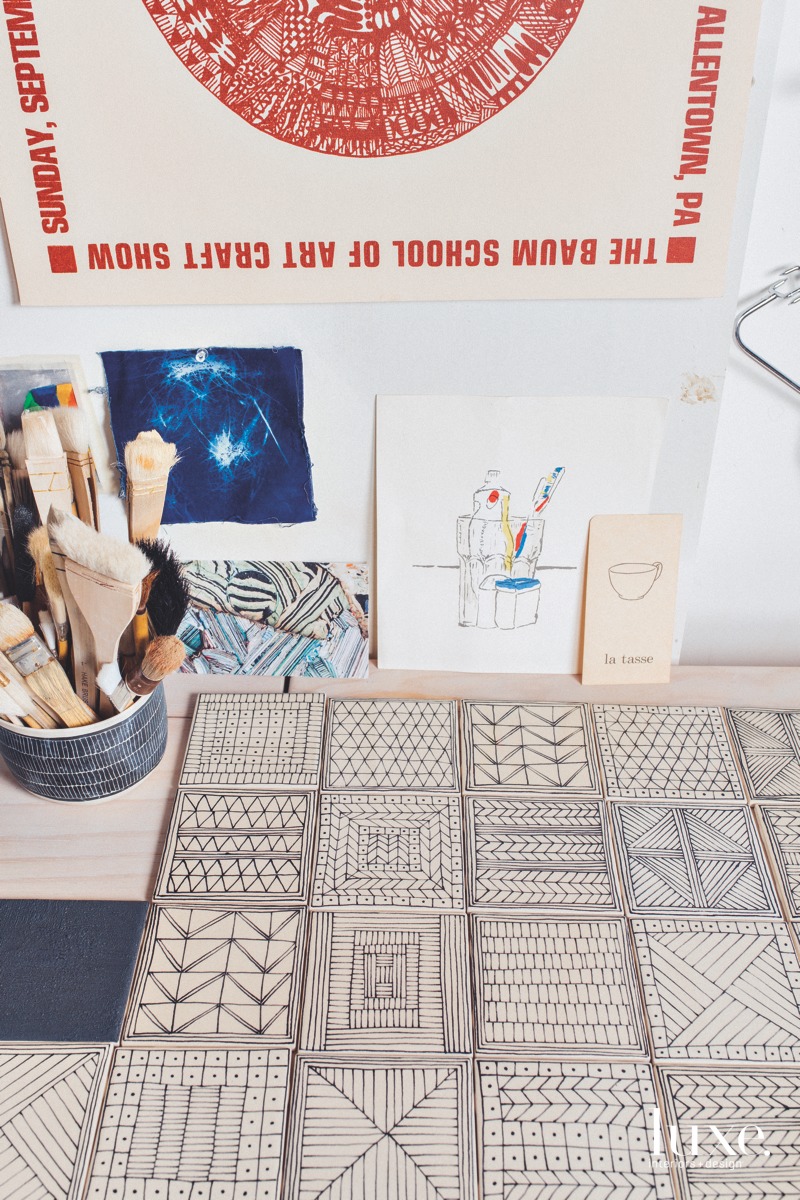 Her studio is also filled with the work of friends, family and artists she admires, including a card by Hilary Harnischfeger, a table by Jose Ambriz and a drawing by her son Sam Sullivan.

Her studio is also filled with the work of friends, family and artists she admires, including a card by Hilary Harnischfeger, a table by Jose Ambriz and a drawing by her son Sam Sullivan. 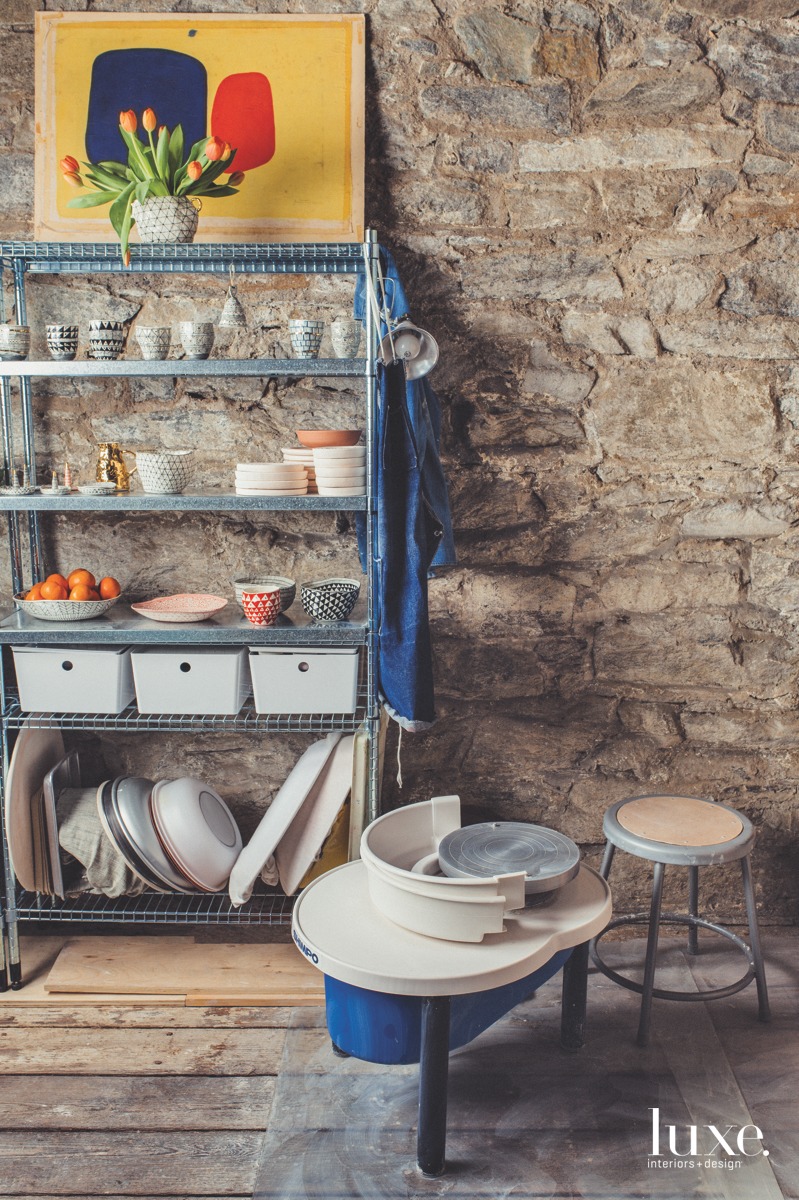 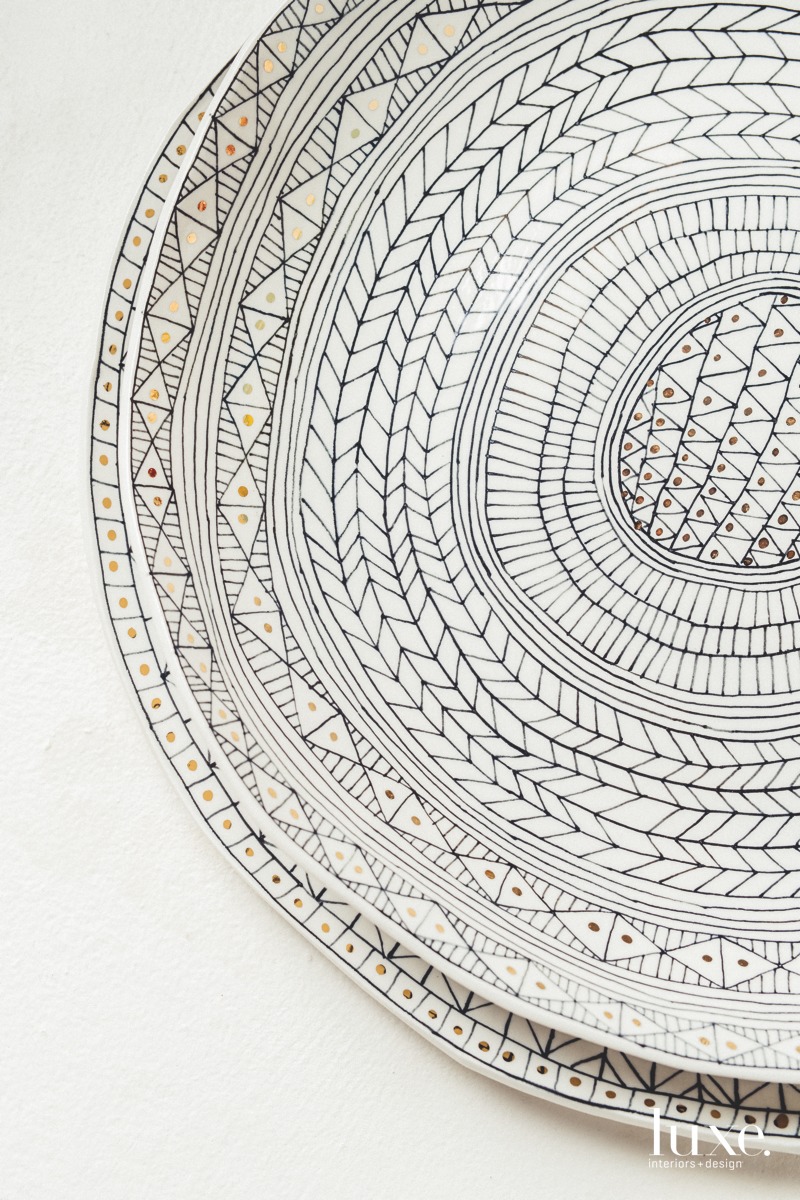 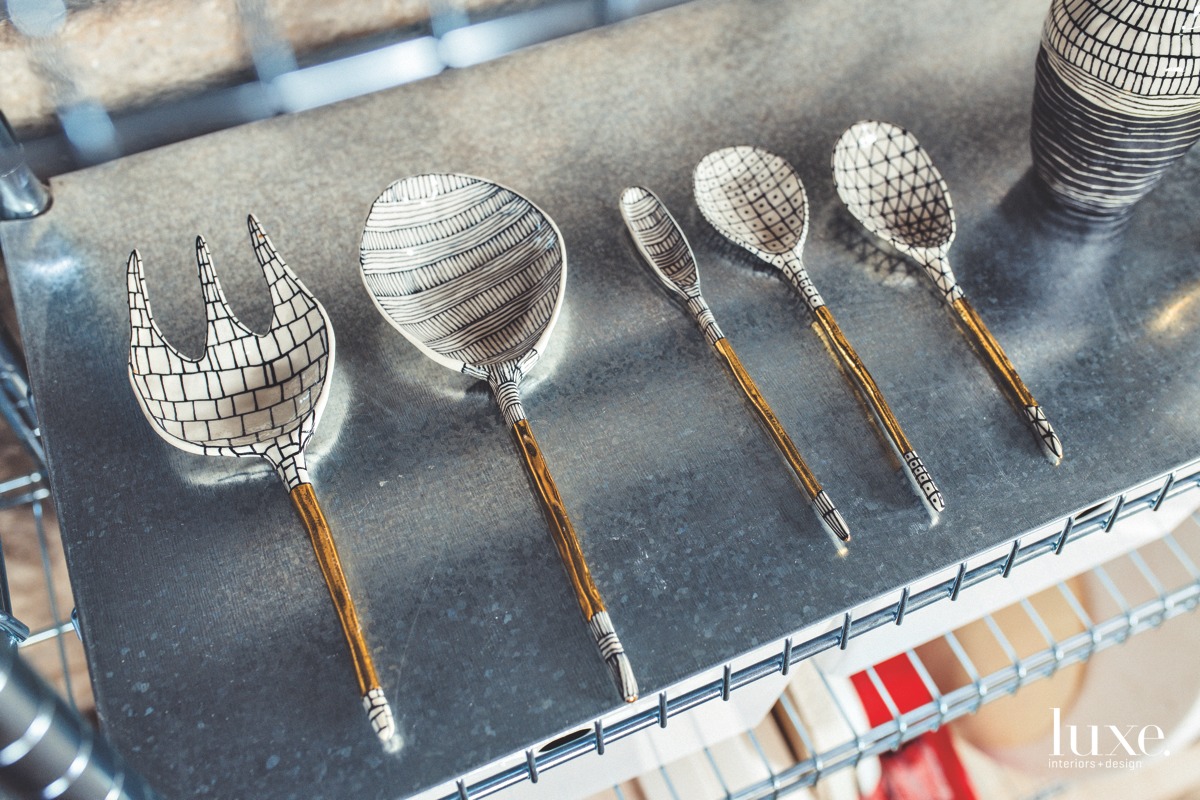 A selection of porcelain spoons with gold lustre handles.

A selection of porcelain spoons with gold lustre handles.

As a college student, Sullivan initially studied anthropology before graduating from New York University’s Tisch School of the Arts with a degree in fine art photography. “Anthropology and photography, as well as growing up among handmade things, all pointed me back toward ceramics,” she says. But it was her daughter who inspired her to pursue the craft seriously a decade ago. “She was about 10 when she had taken up ceramics herself,” Sullivan says. “She was immediately enamored by the wheel, and so we often got to work side by side–her throwing and me hand-building again.” The practice reignited Sullivan’s love for ceramics, and she began selling her creations in 2012.

Made by hand from porcelain, Sullivan’s intricate, painterly wares in tribal-like and bold geometric patterns span vessels, coasters, tableware and tumblers–all glazed in striking hues such as black-and-white, gold, mustard and persimmon. She likens her process to drawing, both upon clay and in designing the piece itself. “I sit down, think about forms and spend a couple of weeks just drawing the shapes of the items,” Sullivan explains. “At some point, I start making patterns on the shapes. Sometimes the contours of a piece dictate what the design becomes, and sometimes a drawing I’ve created seems to be what the shape is asking for.”

For Sullivan, much of the allure of her craft comes from the organic creative process of working with the material itself as well as its tendency to outlast trends. “Ceramics are timeless, because they hold within them physical remnants of the maker and the process,” she says. “Someone pinches a pot, and their fingerprints are embedded in the piece. That in itself is a moment in time that just keeps going.”

Although the artist wants her designs to be accessible, she is still discerning about distribution, offering her wares only at Love Adorned, The Primary Essentials and occasional studio sales. “I’m a small, slow, one-woman operation, and I think one of the things that makes my pieces a bit luxurious is they are hard to find,” Sullivan says. “They’re special but not precious, and I’m not interested in flooding the market. I think of them as little drawings–and little drawings aren’t meant to be mass produced.”