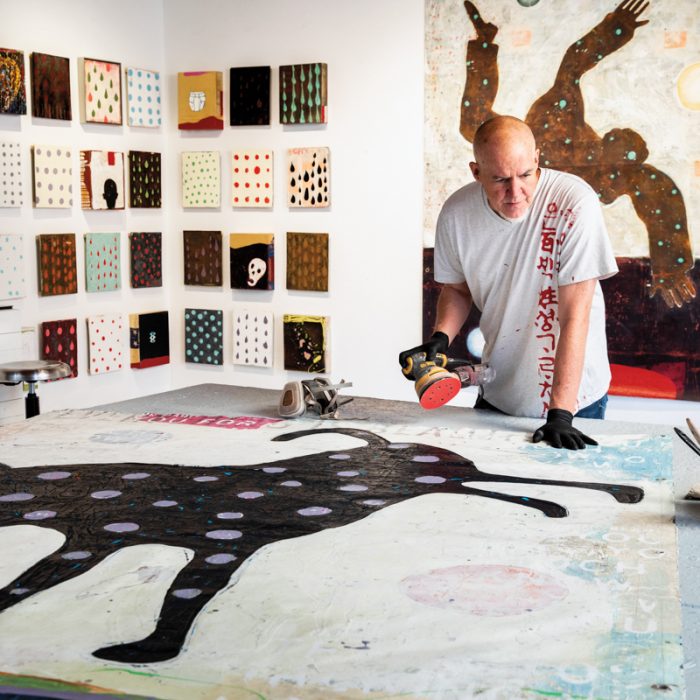 John Randall Nelson at work in his Tempe studio.

Going down the rabbit hole takes on a deeper meaning for Tempe-based mixed-media artist John Randall Nelson. Inspired by American Outsider Art, he creates a visual folklore all his own, filling his collage paintings and sculptures with a menagerie of playful figures and symbols, from dancing jackrabbits and swaggering cowboys to lucky wishbones. Infused with childlike glee, this mythical vocabulary is a personal one for the Arizona artist, reflecting “all the places I’ve lived and all the art that I’ve been drawn to, distilled through my own filters,” explains Nelson.
This accumulated iconography began on childhood jaunts from his native Princeton, Illinois, to nearby Chicago, where he first discovered artists like Jim Nutt and Karl Wirsum. He became immediately drawn to their adaptation of folk art styles and “how they made weird and wonderful narratives with these twisted human figures in unusual settings.” 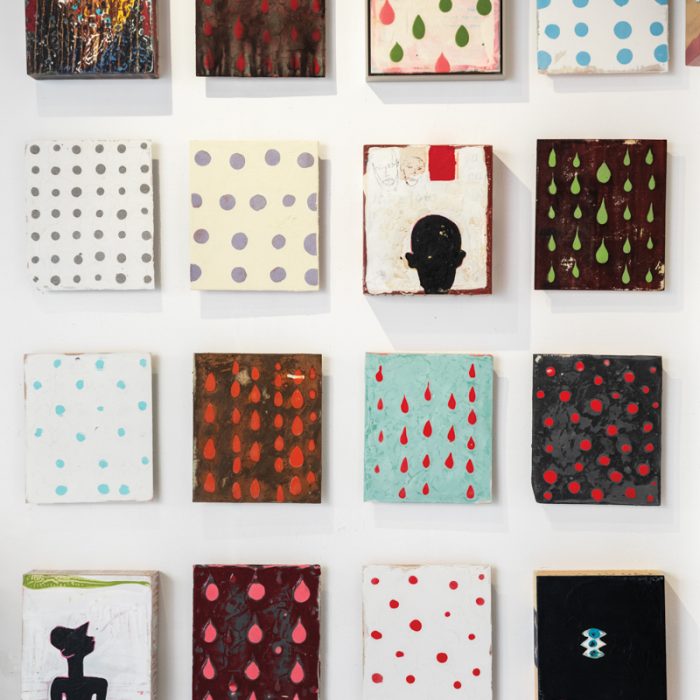 John Randall Nelson creates a visual folklore with his collage paintings and sculptures.

John Randall Nelson creates a visual folklore with his collage paintings and sculptures. 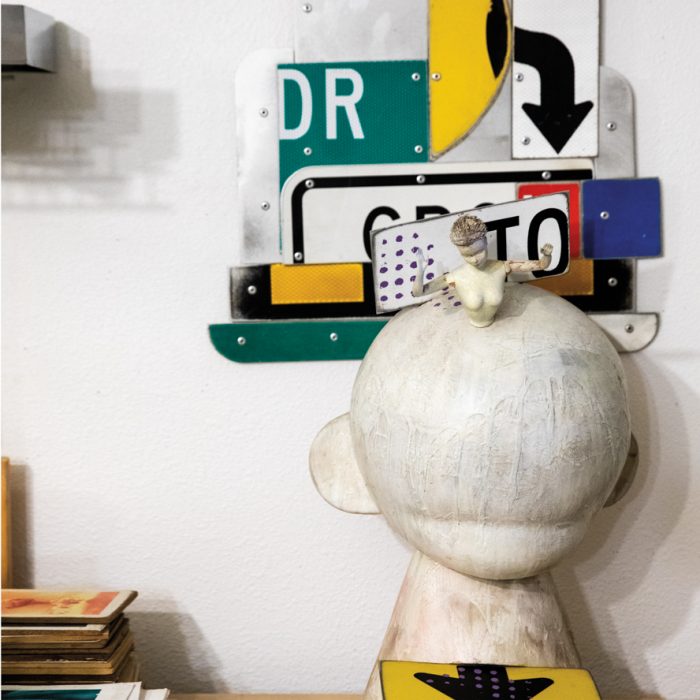 All the places I've lived and all the art that I've been drawn to, distilled through my own filters," explains Nelson.

All the places I've lived and all the art that I've been drawn to, distilled through my own filters," explains Nelson. 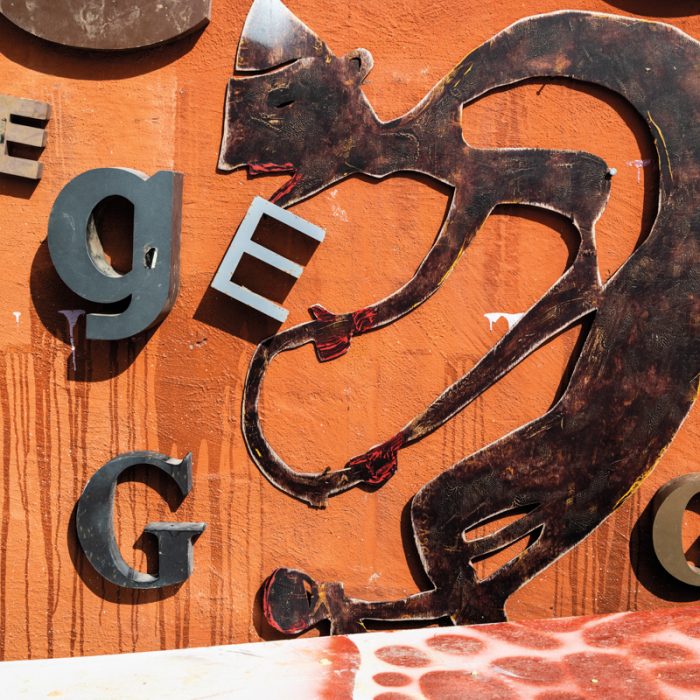 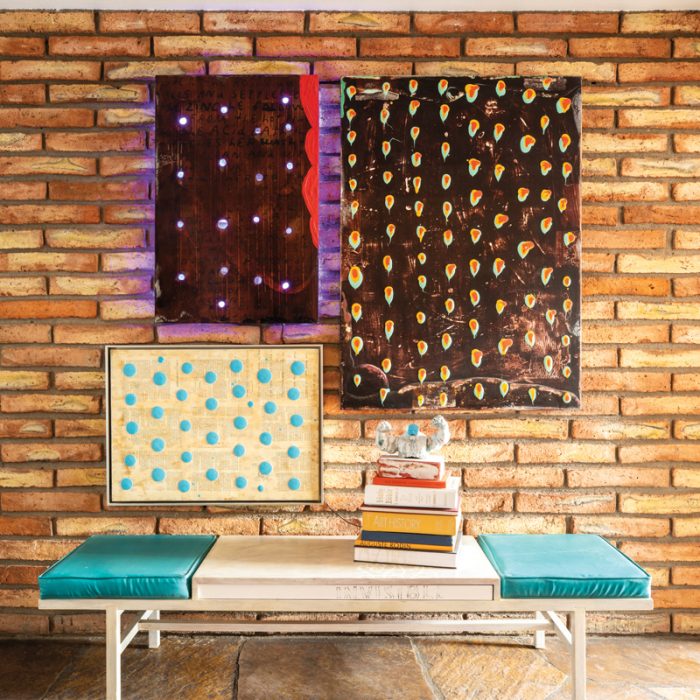 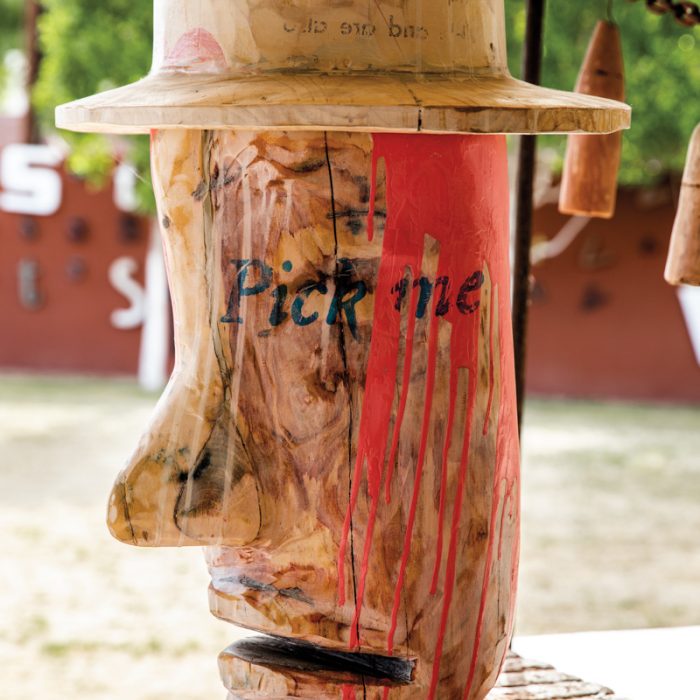 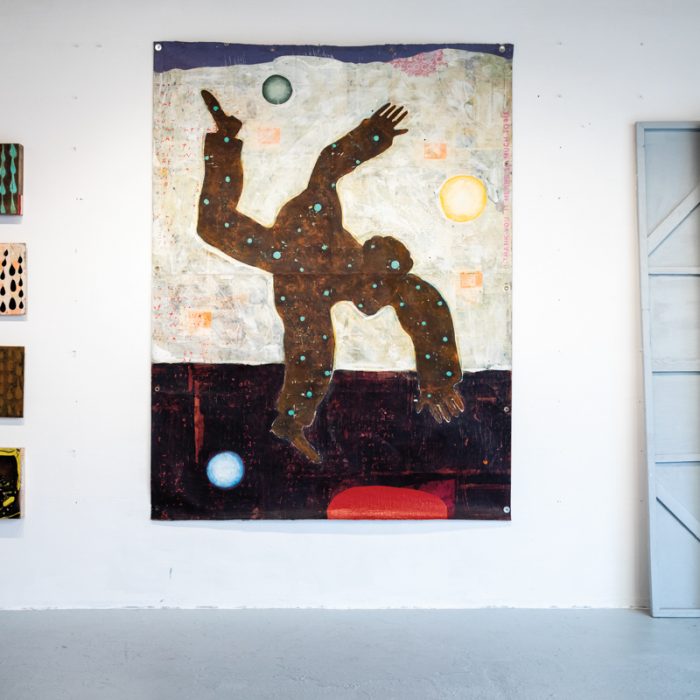 For "Stumbled" (center) the artist layered acrylics over underpaintings that he then partly revealed by sanding.

For "Stumbled" (center) the artist layered acrylics over underpaintings that he then partly revealed by sanding. 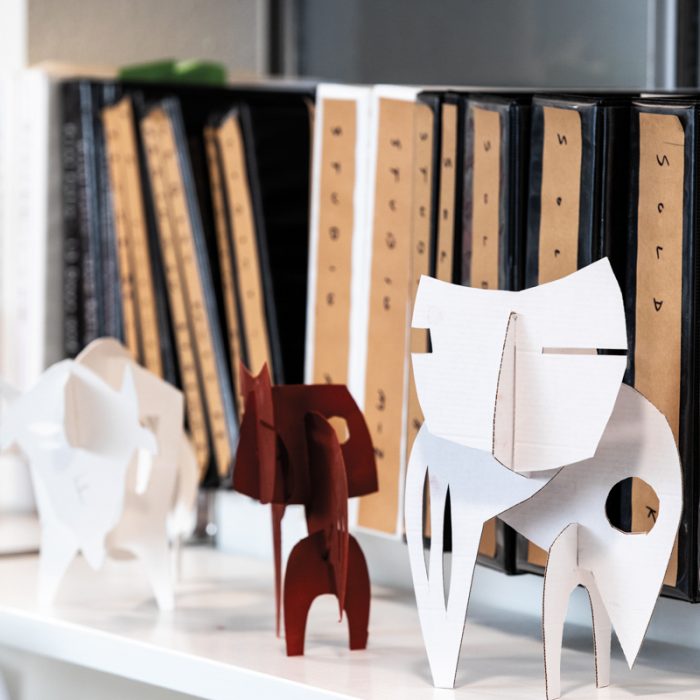 These artists later deeply influenced the faux-naÃ¯ve painting style of Nelson’s collages. Painted in flat plains of color, his graphic characters are surrounded by a Pop art landscape of polka dots and faded word fragments that lurk just beyond easy comprehension. Nelson first honed this eye for typography as an illustrator in New York in the early 1990s, working for publications like The New York Times and The Washington Post.

Words now form the foundation of these paintings, which start by layering a subsurface of torn phrases taken from vintage texts. He uses the font, he says, “as its own decorative pattern.” Over this, he pours thick coats of acrylic and paints on his unique emblems and decorations. He then scratches away sections with an orbital sander to “rediscover what’s underneath,” he explains, exposing words that become “a sort of subtext that whispers at you.”

Though ideas are sketched out beforehand, “what becomes prominent and what becomes buried is intuitive,” explains the artist. “I let the paintings talk, juxtaposing patterns, words and symbols to create a mishmash of meaning.” At the core of this process is a celebration of ambiguity. “I’m less interested in creating a certain message. I find open-ended narratives resonate on a deeper, almost transcendental level.”

The desert’s fauna and wildlife began to permeate this artistic storytelling when Nelson moved to Tempe in 1995 to complete his MFA at Arizona State University. Since then, he’s adopted the state as his creative home, with representation at Gebert Contemporary in Scottsdale. Arizona has also become a living playground for his symbols through his public art projects. This includes his most iconic figure, the indigenous jackrabbit, which Nelson first fell in love with while hiking the region’s desert trails.

His jackrabbit grew giant-size for his 26-foot-tall statue One-Eyed Jack, installed in 2018 as a landmark for the Old Town Scottsdale Art District. Inspired by the famous Chicago Picasso statue, the artist tapped into more modernist language, breaking the image down to its elemental parts, then jigsawing the pieces together in collaboration with local fabrication firm R.J. Ruff & Co. Instead of polka dots, the artist injected his signature whimsy by illuminating the steel structure with rainbow LED lights.

Reminiscent of Lewis Carroll’s guiding white rabbit, the piece intends to beckon visitors to the area’s blossoming art community. “I wanted to pull from my own personal iconography to create an icon for this neighborhood,” explains Nelson. These public projects also serve as a gesture of gratitude for the artist–returning the symbols that have meant so much back to the places that have fed his imagination.