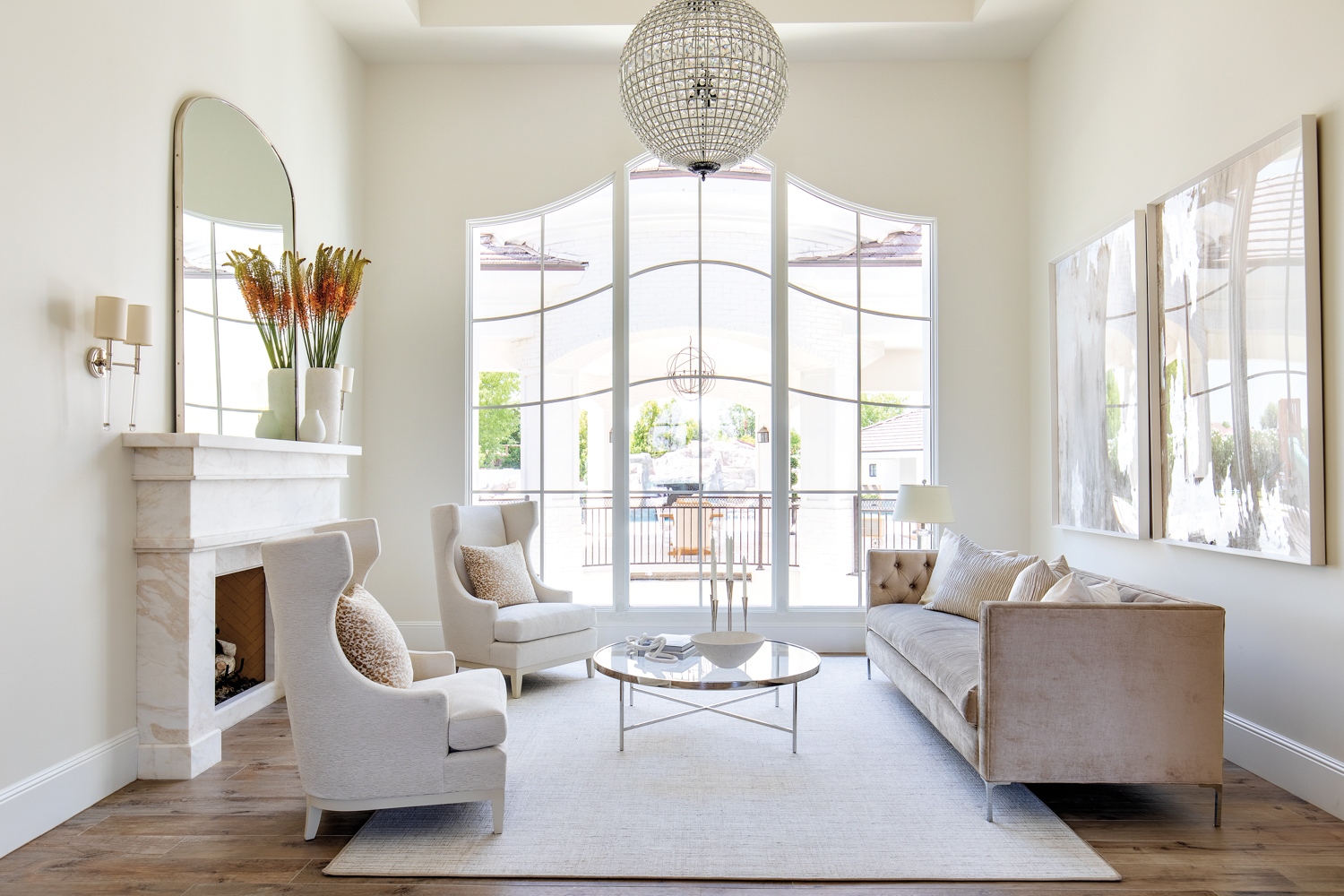 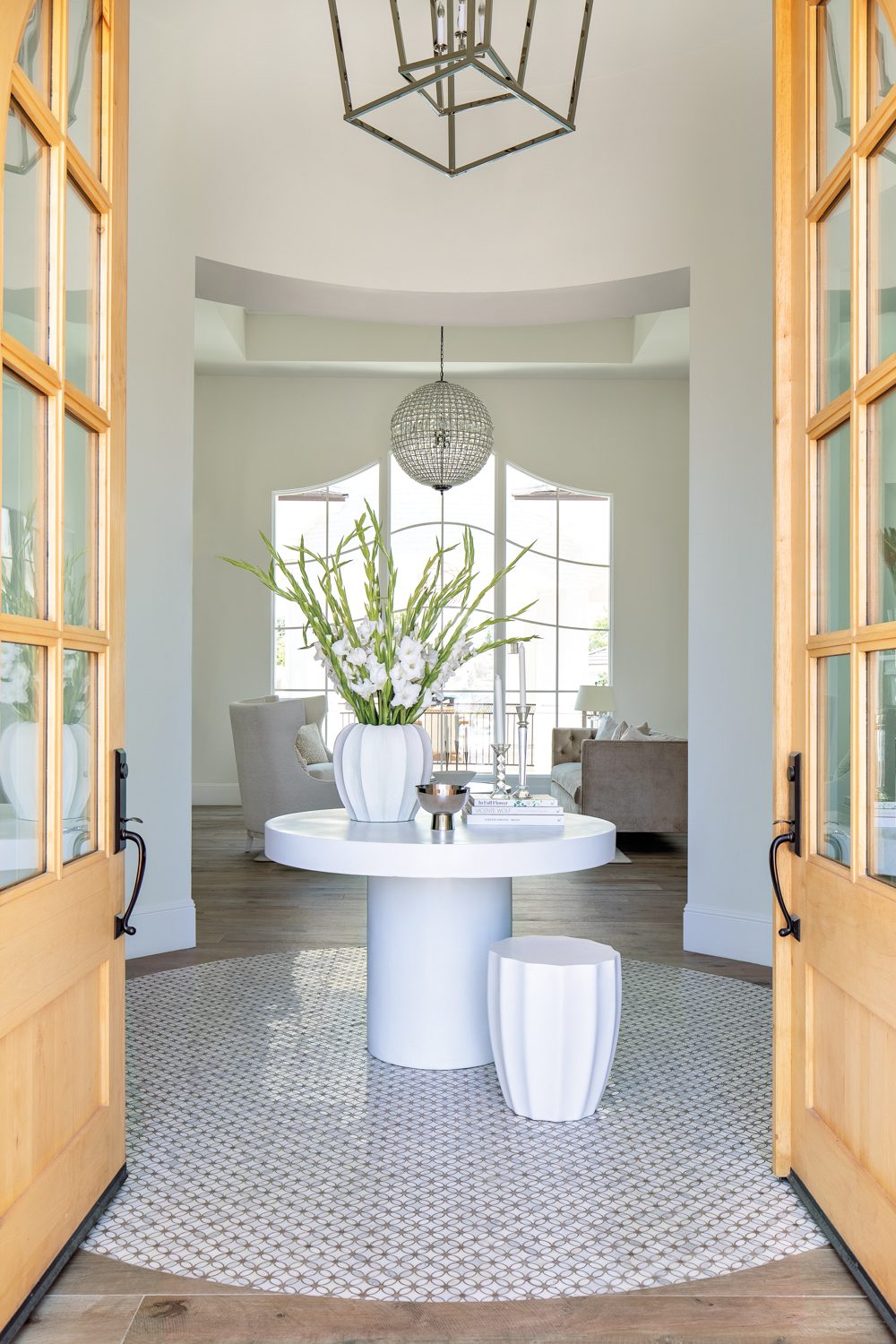 Simon composed thoughtful spaces that complement the architecture. In the foyer, a concrete white pedestal table from Urbia Imports and a fluted Phillips Collection stool echo the room’s curved lines.

Simon composed thoughtful spaces that complement the architecture. In the foyer, a concrete white pedestal table from Urbia Imports and a fluted Phillips Collection stool echo the room’s curved lines. 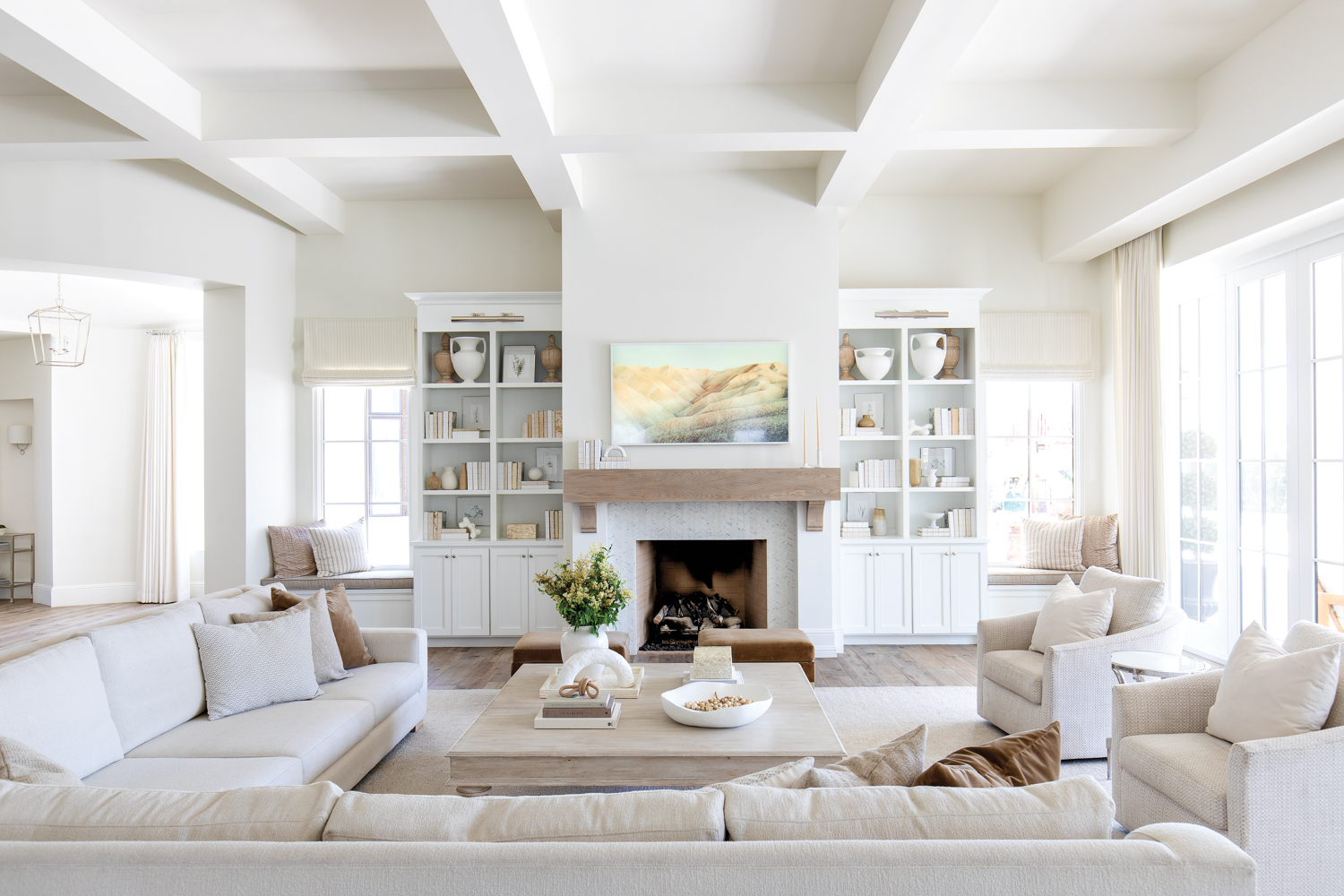 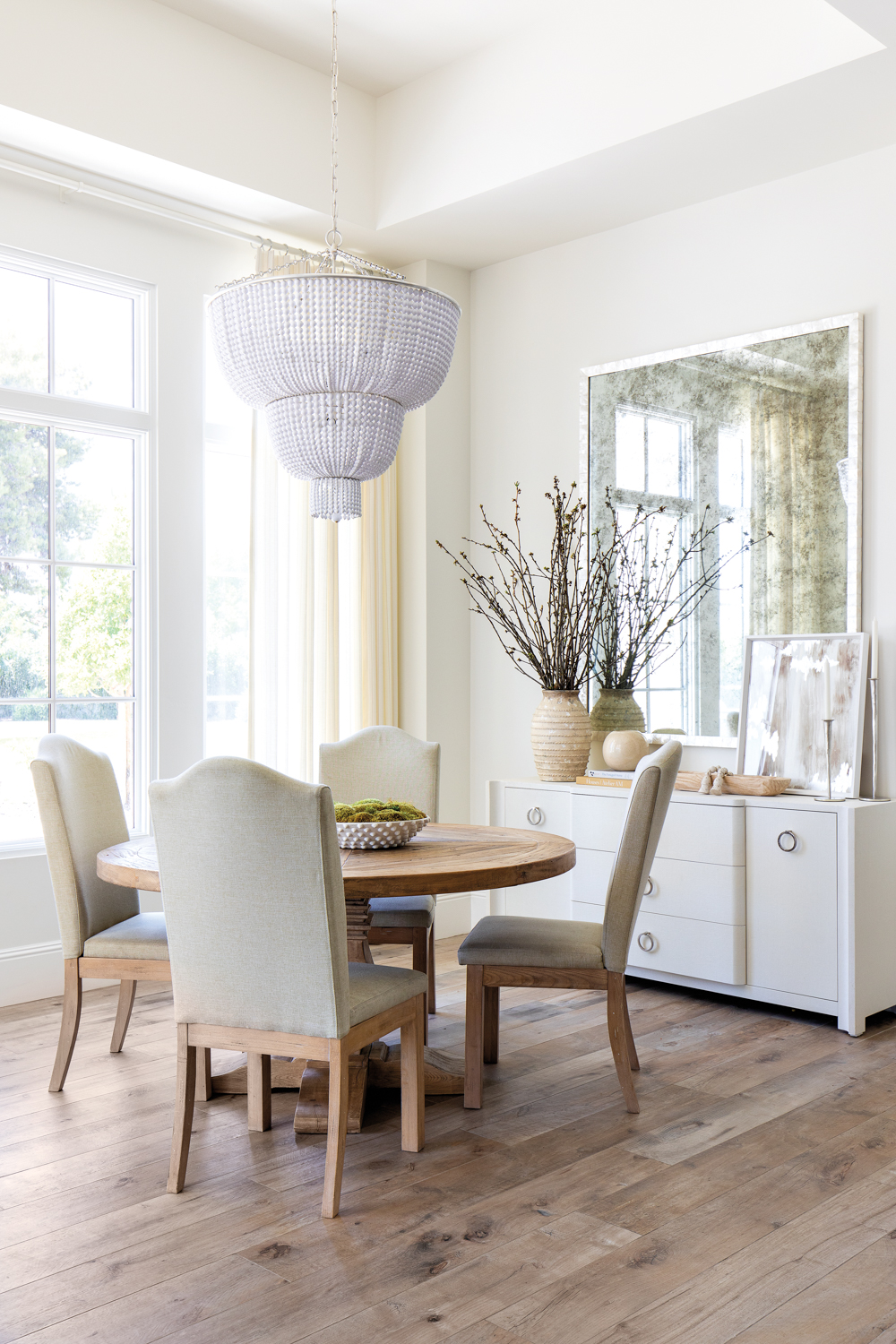 To flesh out the dining set in the intimate breakfast nook, Simon added textural accents, like a custom antiqued mirror and an RH vase, to the Bungalow 5 credenza. Atop the dining table is a Formations vessel.

To flesh out the dining set in the intimate breakfast nook, Simon added textural accents, like a custom antiqued mirror and an RH vase, to the Bungalow 5 credenza. Atop the dining table is a Formations vessel. 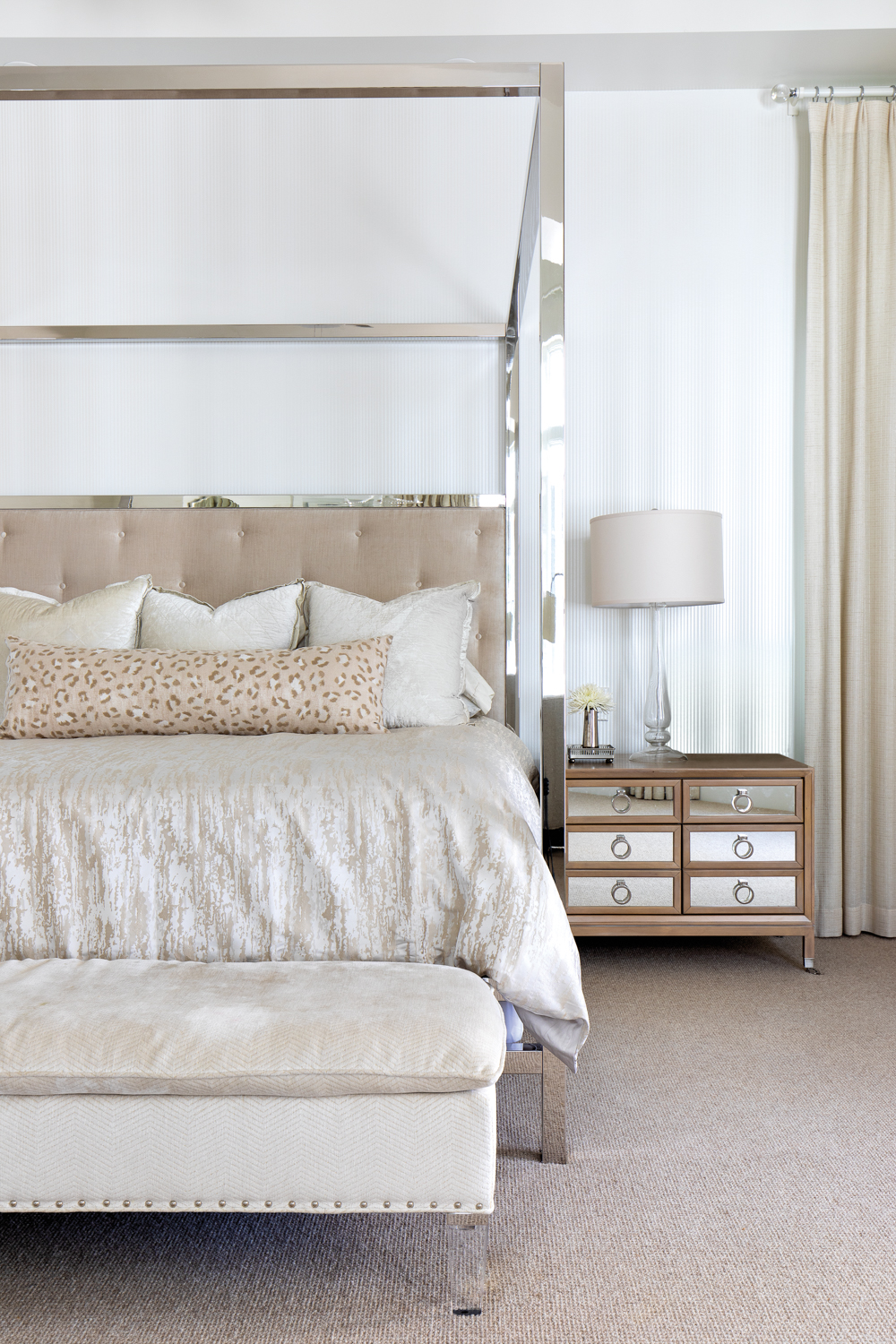 Silken textiles and mirror finishes form a luxurious haven in the couple’s bedroom. Grounding the space is a Bernhardt bed swathed in a Lili Alessandra coverlet and topped with pillows made from Scalamandré and Fabricut fabrics.

Silken textiles and mirror finishes form a luxurious haven in the couple’s bedroom. Grounding the space is a Bernhardt bed swathed in a Lili Alessandra coverlet and topped with pillows made from Scalamandré and Fabricut fabrics. 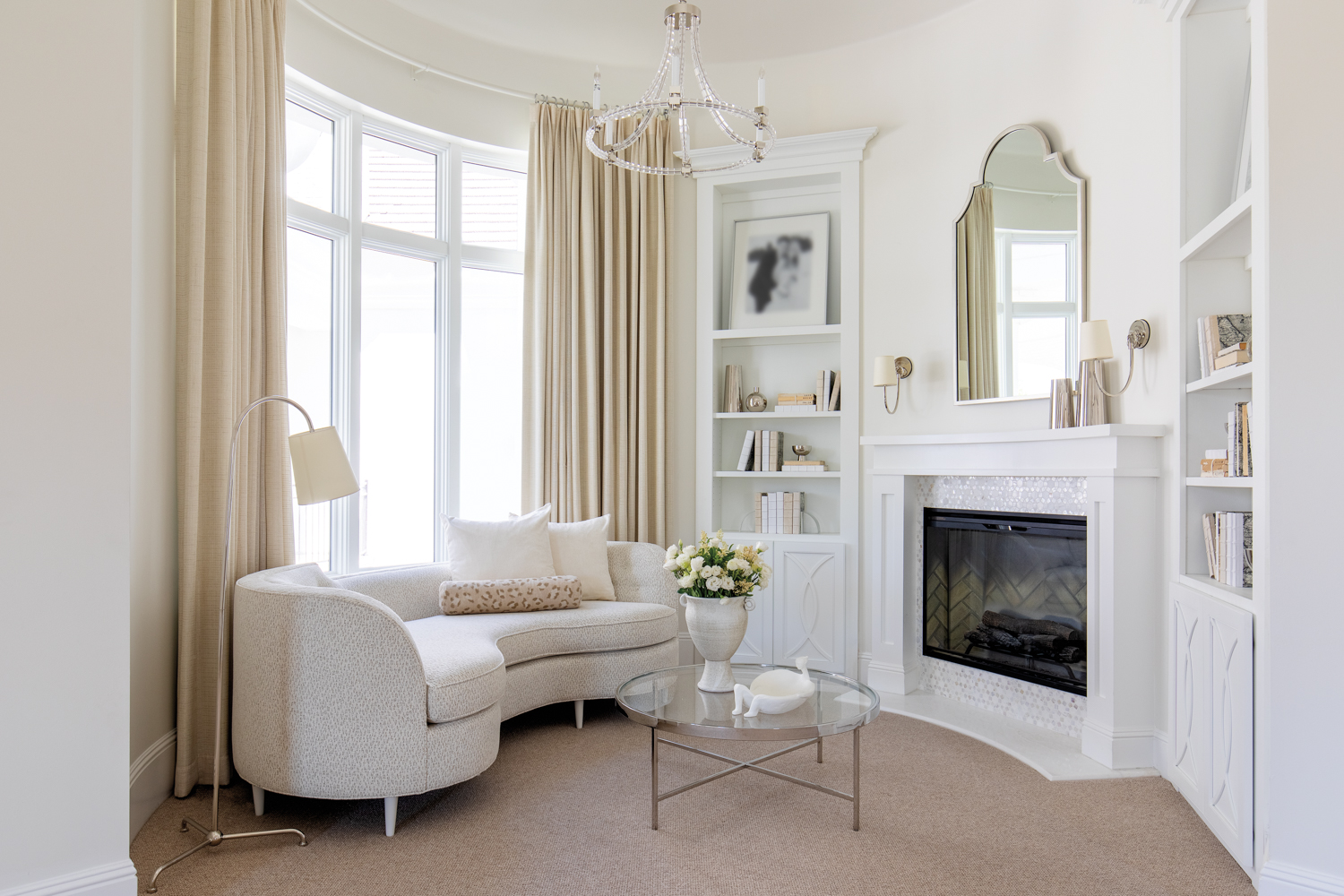 When you are a professional baseball player constantly on the road, home is wherever your family is. That’s why one close-knit Arizona couple so treasured traveling with their two young children in tow, following the husband’s major league games around the country. But after years of adventures across America’s iconic ballparks, the family longed to plant deeper roots in their native state. “We wanted our home to become the hub for our families, where everyone could be together,” the wife shares.

They already loved so much of their newly constructed house in Tempe, with its rotunda entryway, arched windows and tall ceilings. But the space lacked those tangible and intangible layers that give residences a sense of belonging. “They needed to experience that welcoming feeling right when you walk in,” says interior designer Britany Simon, whom the family recruited to help make this dwelling completely their own.

The most important thing to the couple was a “family vibe,” the wife says. “I wanted it to be elevated, but also homey.” Simon’s first step in this balance was ensuring the furniture worked with the architectural details. To anchor the round entrance hall, for example, Simon chose a hefty concrete pedestal table and fluted stool in statuary white, echoing the space’s shapely outlines. Veins of glamour also run through the special occasion areas, “which we made more polished—literally—by adding metals and mirrors,” she notes. Stainless steel chairs in the dining room as well as a glossy velvet tufted sofa and oversize mirror in the living room infuse the abode with luxurious touches.

For more informal areas, like the family room and breakfast nook, Simon favored streamlined versions of classic shapes to “achieve that mix of modern and traditional,” the designer explains. But she incorporated understated textures for a more relaxed atmosphere, such as the deep-seated sectional covered in nubby bouclé and the custom oversize coffee table made from salvaged Douglas fir. Those finishes “really ground the space in warmth,” she says. Swivel armchairs and ottomans also offer dynamic seating options, adaptable for both quiet family nights and large weekend gatherings with friends. “In our projects, we always like to include pieces that can be easily moved around wherever an extra person needs to join a conversation,” Simon notes.

Though the clients were open to wandering outside their comfort zone, they did have one major request: “They wanted a really quiet color palette, so the spaces would feel airy,” Simon says. The muted tones marked a notable departure for her team, known for their bold strokes of color. “But we liked the challenge,” the designer adds. “We kept everything fairly light, with creams, whites, taupes and beiges throughout.” The lone exceptions were reserved for personal gestures, like the framed sports uniforms in the media room, including the couple’s letterman jackets from their early days as high school sweethearts. Of course, rooms in varying shades of white don’t naturally seem child-friendly, but Simon focused on integrating durable performance-quality textiles, weathered woods and hardy metals so “they could live in their home without feeling like it’s a burden,” she says.

Away from these central gathering areas, Simon made sure to cultivate more private, personal niches. Layered in mirrored finishes, velvet throws and lush drapes, the main bedroom “feels like a retreat,” the wife notes. “I go in there and I feel at peace.” The couple particularly enjoys brief moments of quiet in the bedroom’s sitting area, which showcases a curvaceous loveseat “that seems almost made for that space,” the designer says. Meanwhile, the children claim their own domain in the whimsical playroom, where Simon commissioned a hand-painted tree mural, reinforced climbing wall, and custom dollhouse mimicking the dwelling’s colors and textures. “The wife always talks about how much the kids miss that space when they’re away,” Simon shares. “It’s one of the first places they run to when they come home.”

The designer never lost sight of the fact that the clients would frequently leave this house for long sojourns. Distance would only concentrate their longing for home and deepen that precious moment of return as they reunite with family and friends. “And that’s my favorite part,” Simon says. “It’s so rewarding to know that you’re creating spaces that are not only functional, but also make them feel good and represent who they are.” 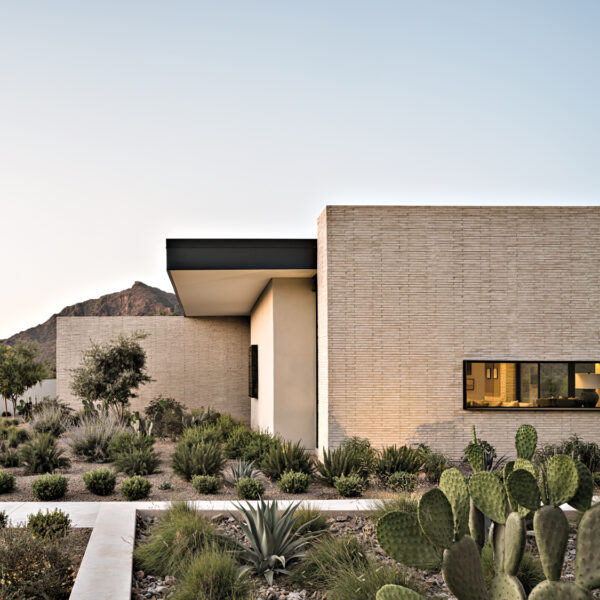 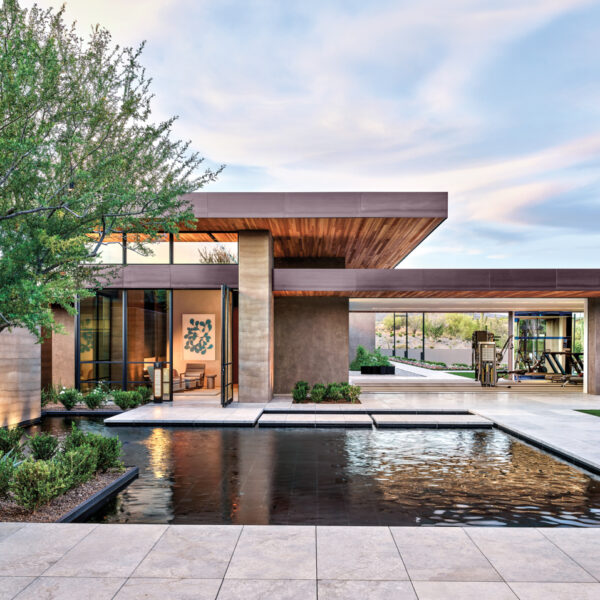 This Modernist Arizona Home Looks Like It Rose From The Desert 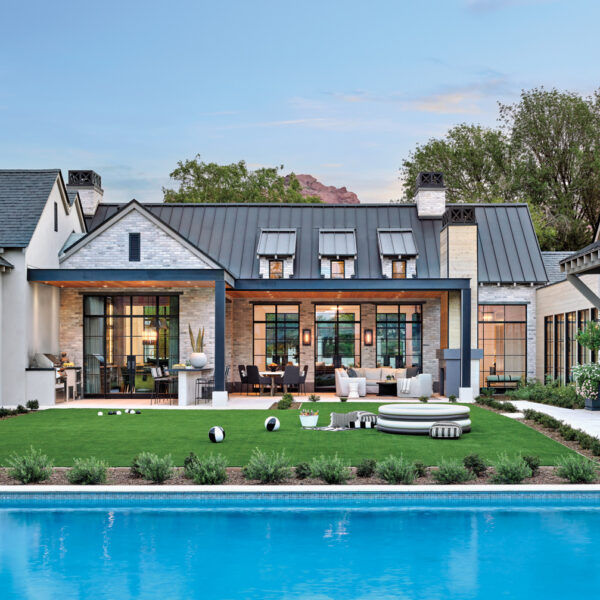 Tour A ‘Next-Level’ Modern Farmhouse With Nods To Wine Country 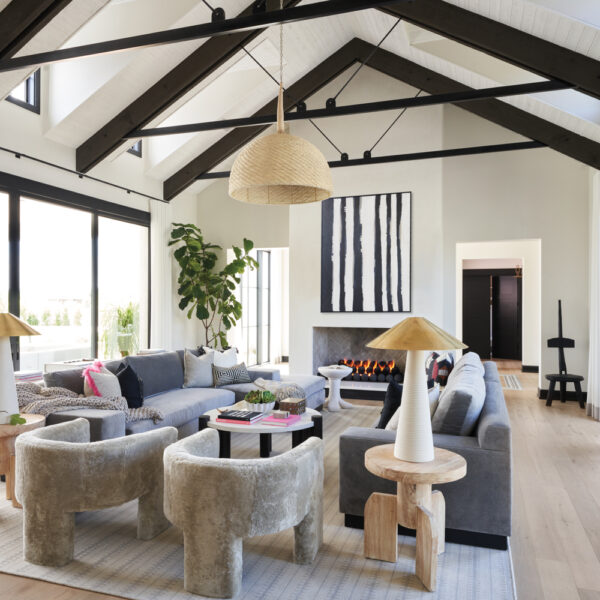