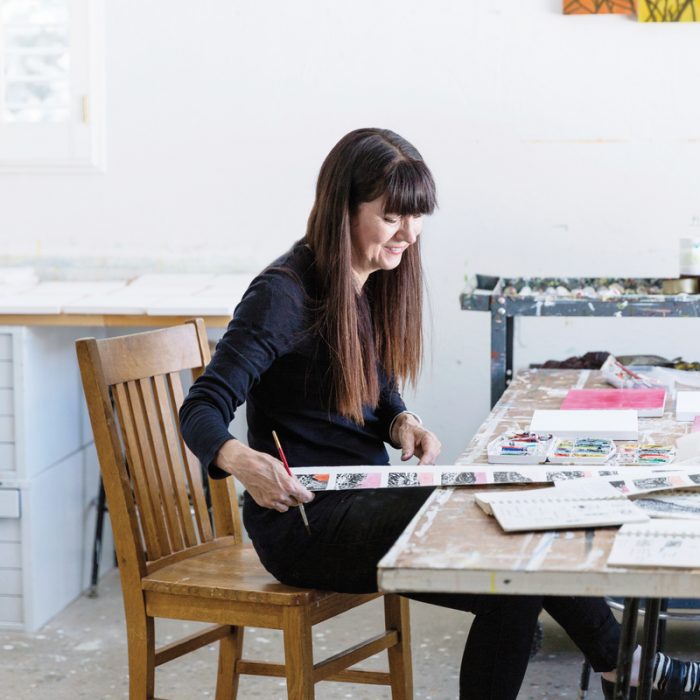 f a single statement could summarize the mind-set of Denver painter Trine Bumiller, she says it would be along the lines of “everything connects.” It’s a simple observation about the natural world, but it has provided the artist with inspiration for a growing body of work exploring themes of memory and place.

To Bumiller, the explanation of the whole can be found in the pieces composing it. “What fascinates me about the universe is how small parts make something big,” explains the artist, whose work has been represented by Denver’s Robischon Gallery for more than 30 years. “For instance, thousands of seconds make a day.” Many of her abstract paintings–displayed in places ranging from the Kirkland Museum of Fine & Decorative Art to the Peninsula Hong Kong hotel–explore minute elements such as a patch of lichen or the flicker of yellow light through branches. 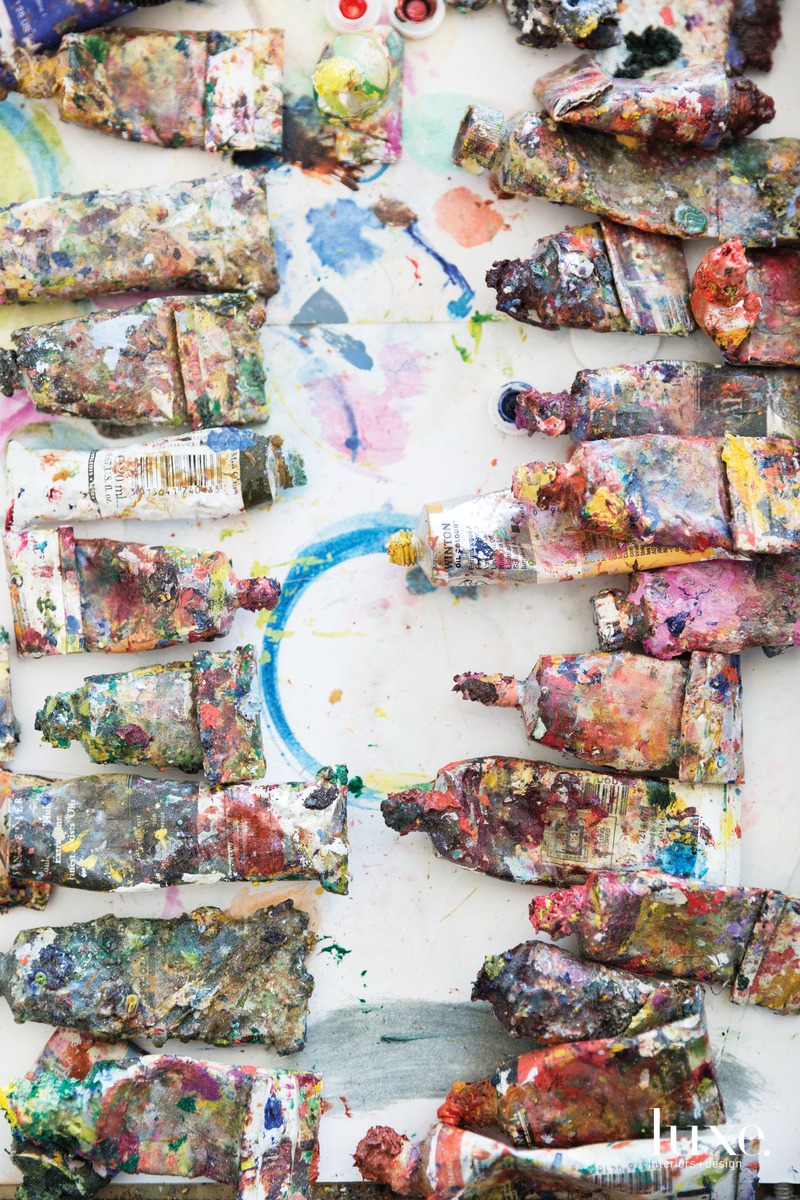 Other studio staples are well-used tubes of oil paint.

Other studio staples are well-used tubes of oil paint. 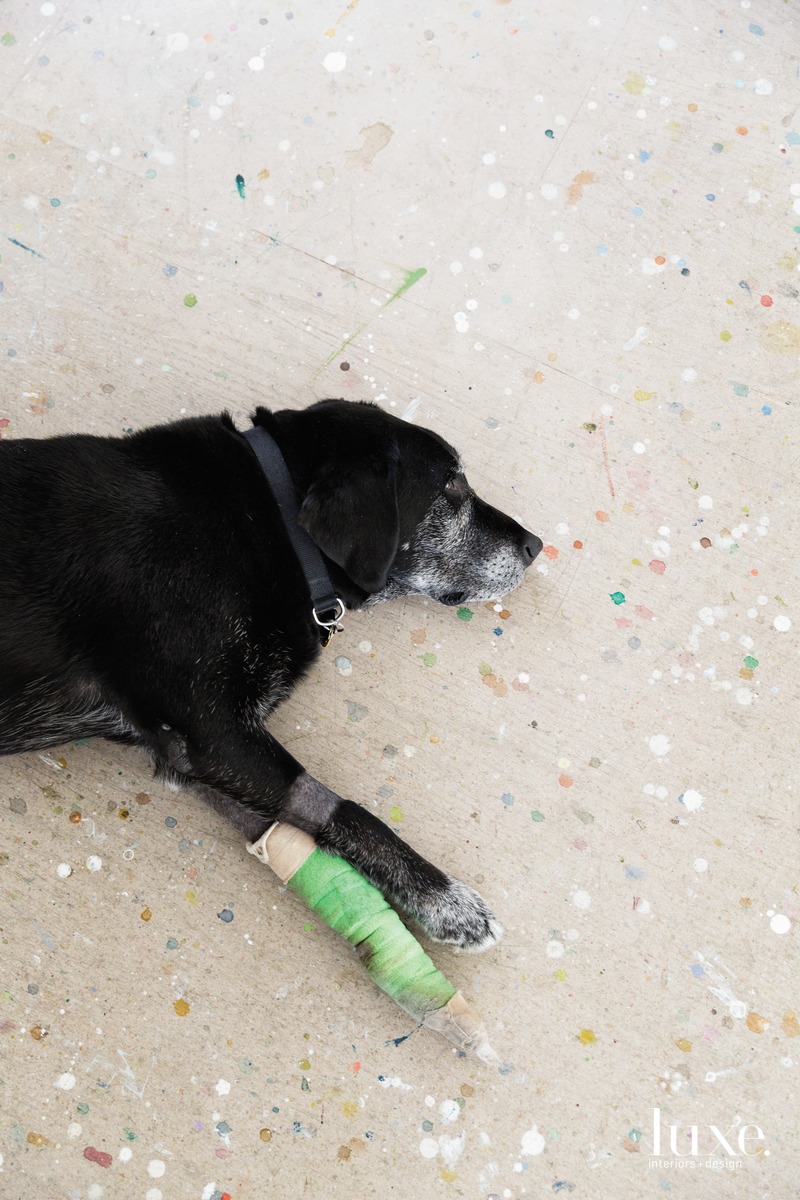 Moose, the artist's 10-year-old Labrador retriever is another staple of the studio.

Moose, the artist's 10-year-old Labrador retriever is another staple of the studio. 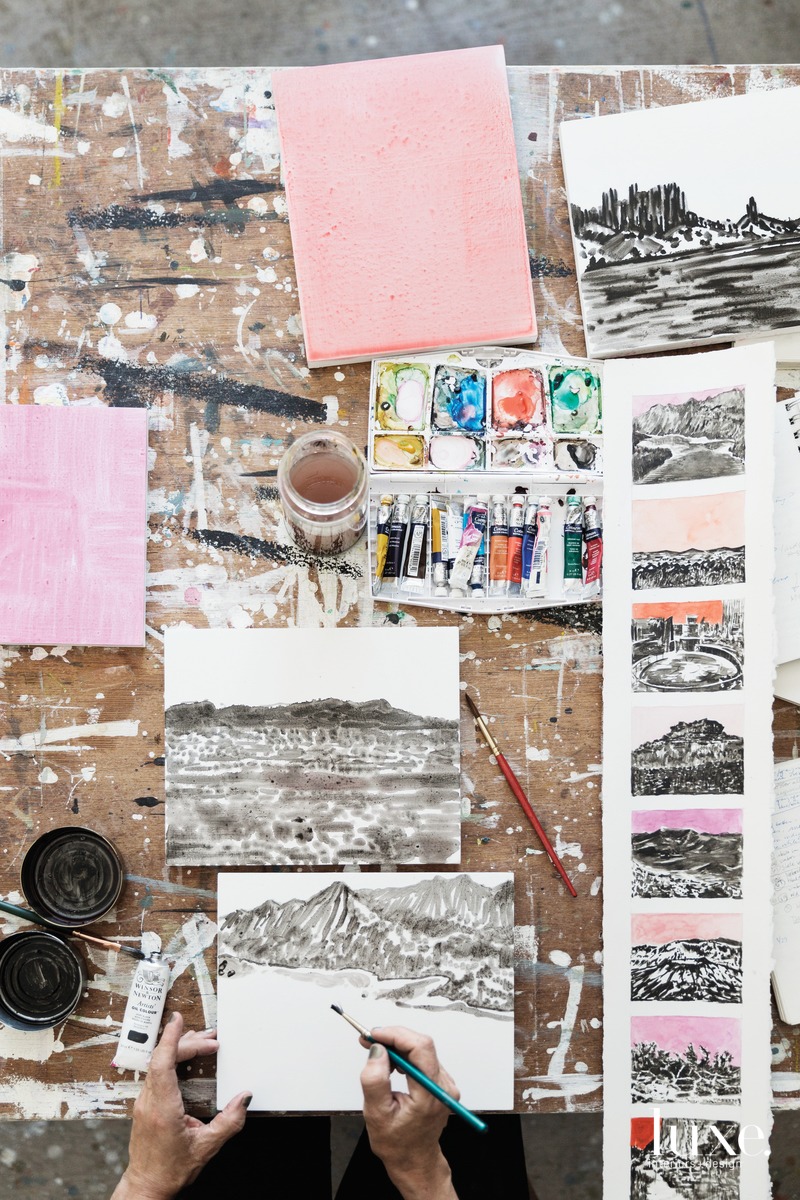 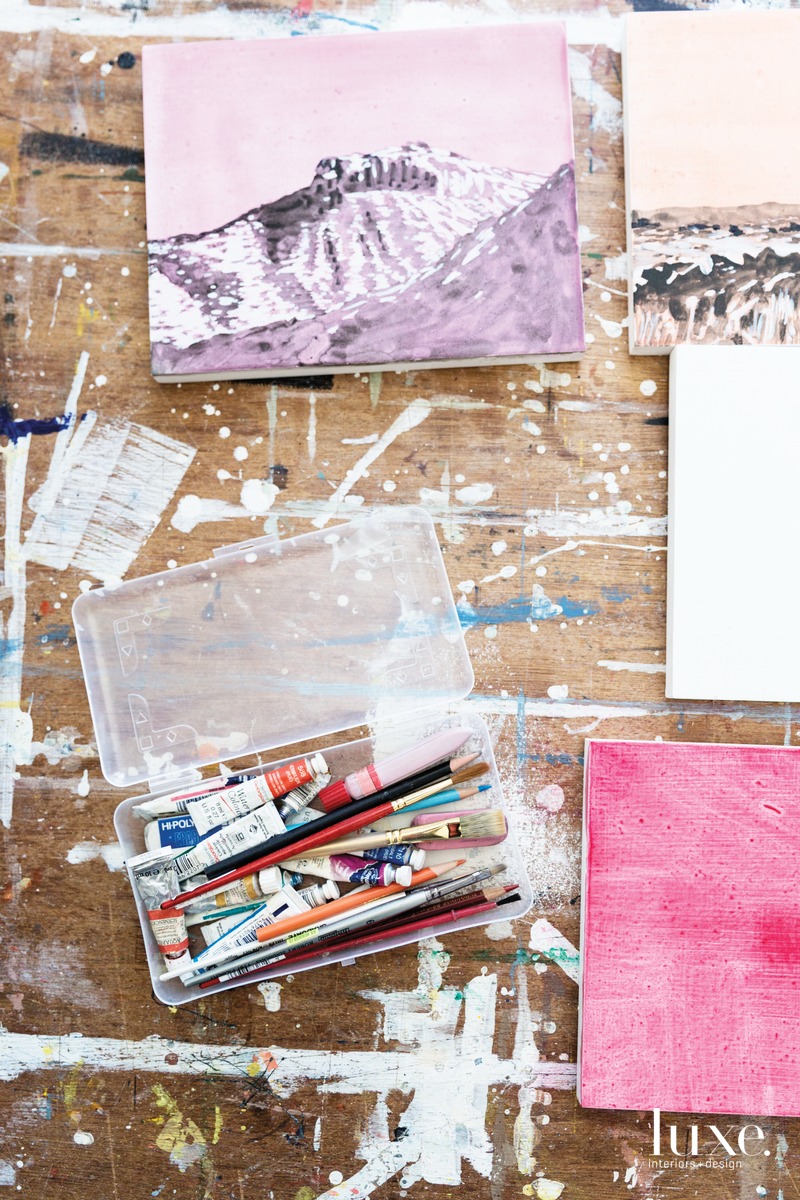 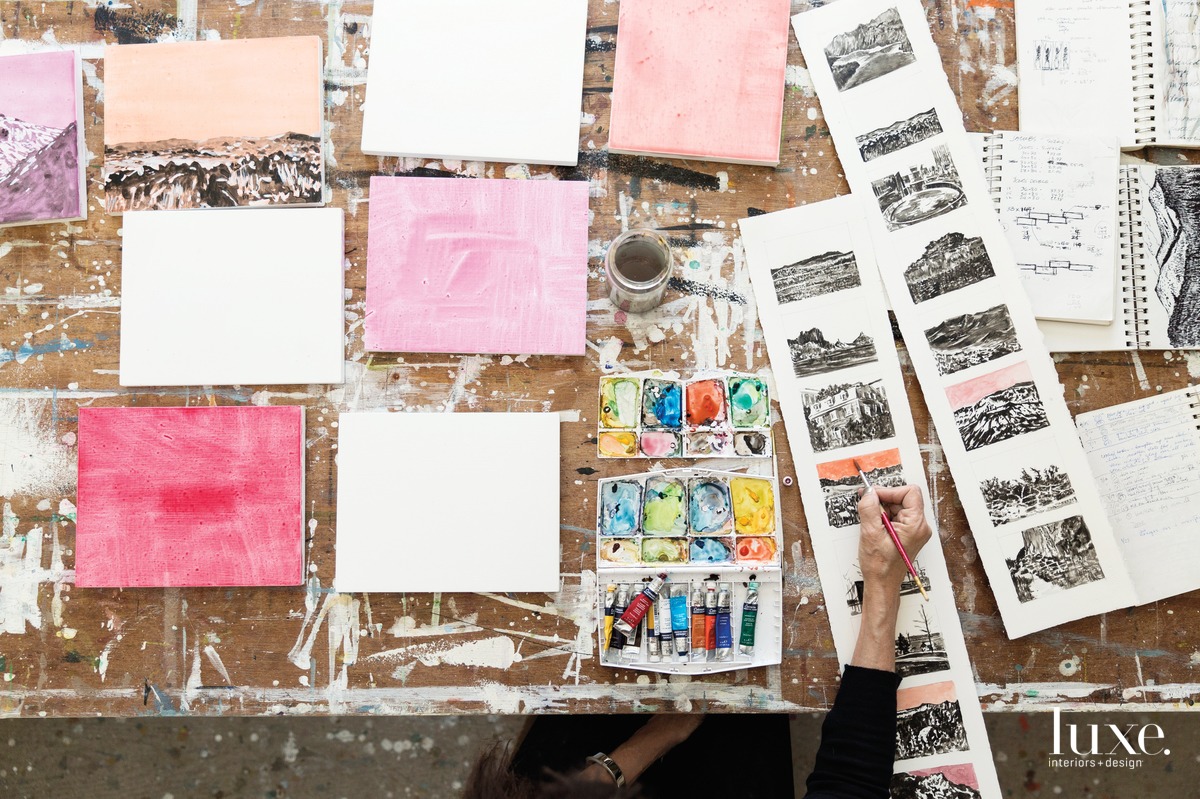 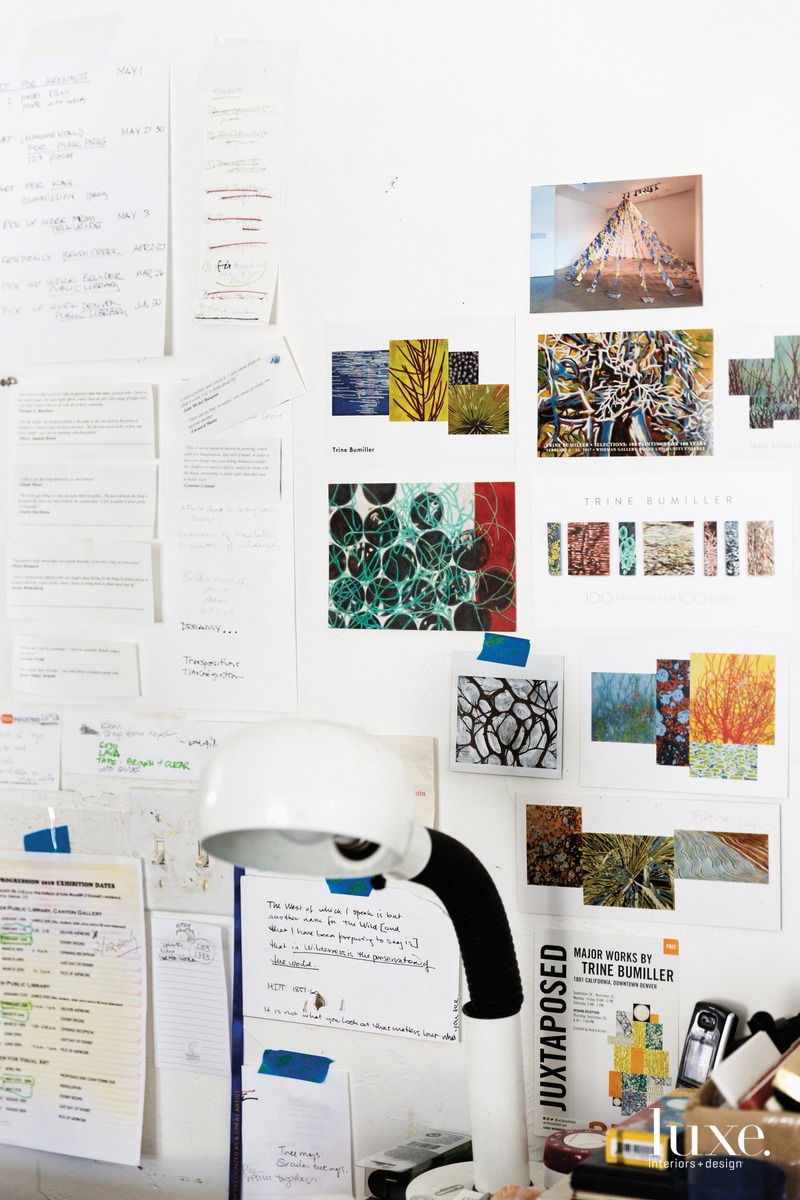 The wall over the desk in Bumiller's studio holds ideas and lists.

The wall over the desk in Bumiller's studio holds ideas and lists. 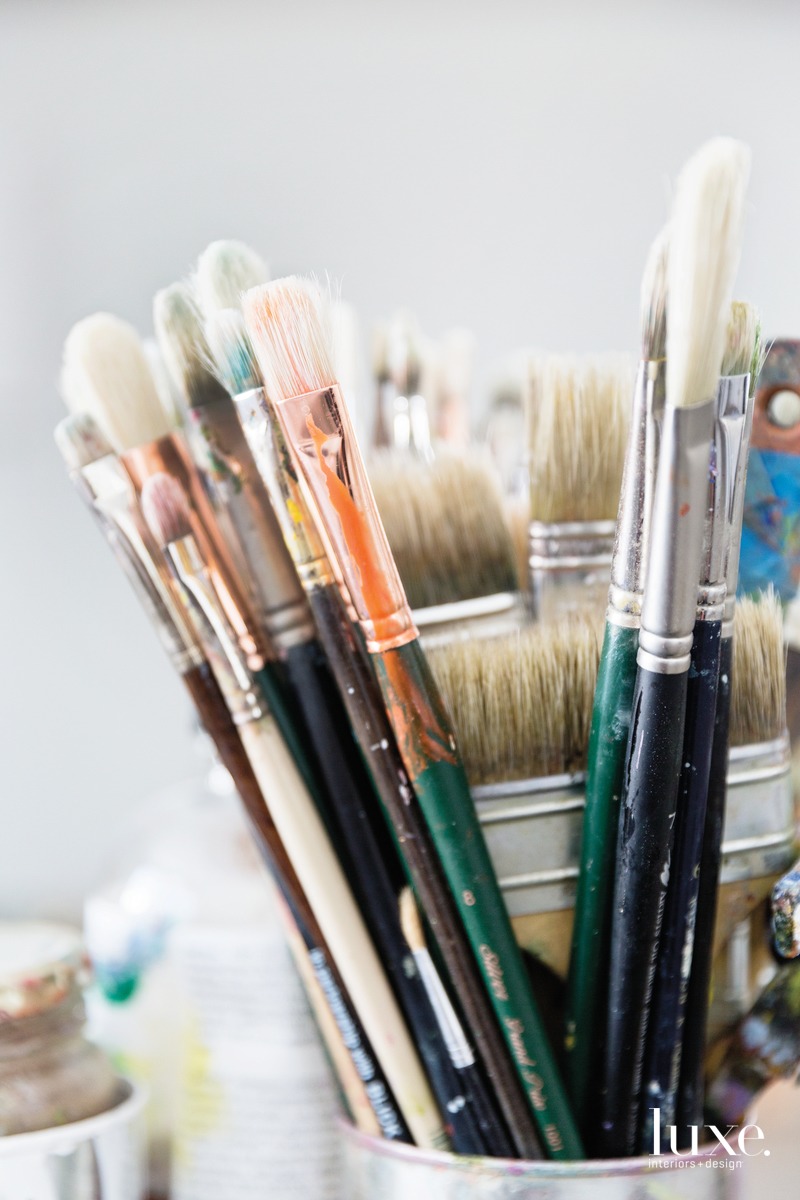 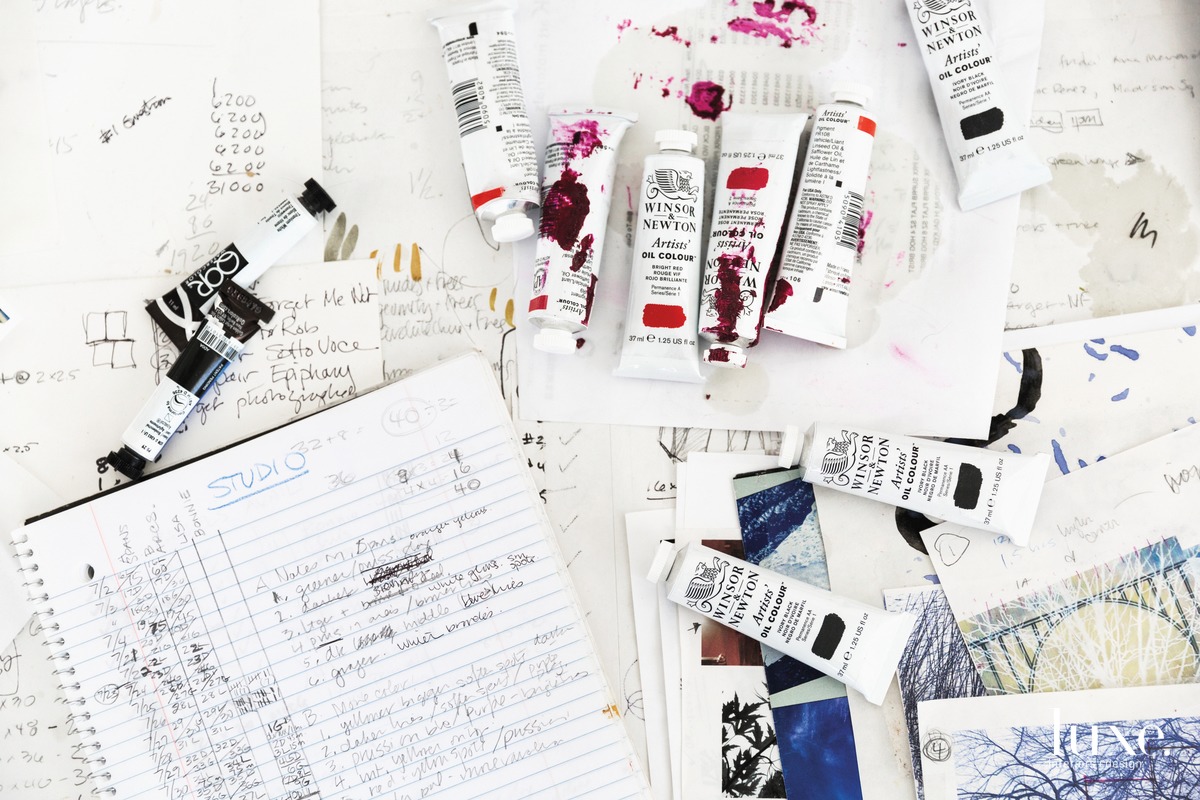 il paints and notes dot her studio in Park Hill.

il paints and notes dot her studio in Park Hill.

It’s a theme long embodied in portions of Bumiller’s work. As a teenager, she earned money painting 6,000 portraits over a few summers at an amusement park near her Cincinnati hometown. Years later in 2000, after moving to Denver for her husband’s work, she drew 2,000 frogs in honor of the leap year. In 2015, she unveiled 100 paintings commemorating Rocky Mountain National Park’s centennial. Recently, she completed Monumental, 129 paintings of American national monuments on display through August at the Center for Visual Art at Metropolitan State University of Denver as part of the “Pink Progression” group art exhibition.

The Monumental paintings are more expressionistic than abstract, but they maintain Bumiller’s creative use of color. “I get so excited by the colors I see in nature, but I don’t feel attached to their reality,” she explains. “I don’t think the sky needs to be blue.”

In this case, a palette of black, white, red and pink is used to record and honor places of natural beauty and interest. For most of the pieces, executed in the artist’s Park Hill studio, Bumiller first uses thin, black oil paint to sketch scenes on wood panels. She then adds pink and red glazes and white highlights, repeating the process several times for each painting. Although there are no people shown, the works reference human actions. She describes the art as an interesting way of looking at history and memory and of what people choose to preserve–and how they preserve it.

Bumiller is energized by the complexity of these multi-painting projects. “I love working out the numbers and dimensions and thinking about the workflow,” she says, noting it took four weeks of 10- to 12-hour days to complete the Monumental series. “For me, there’s nothing better than having the work all laid out for the next several weeks or months, because getting started is always the hard part.” Once that happens, the painting pulls her along and demands her attention.

Next, Bumiller plans to focus on large pieces that deal with the complexity of the environment. Early next year, her work addressing climate change will be part of a group show at the University of Colorado Boulder. “Whether it’s a lot of parts or large paintings, I like a human-size scale,” Bumiller says. “It’s about making a statement regarding the environment and replicating the feeling of being immersed in nature.”