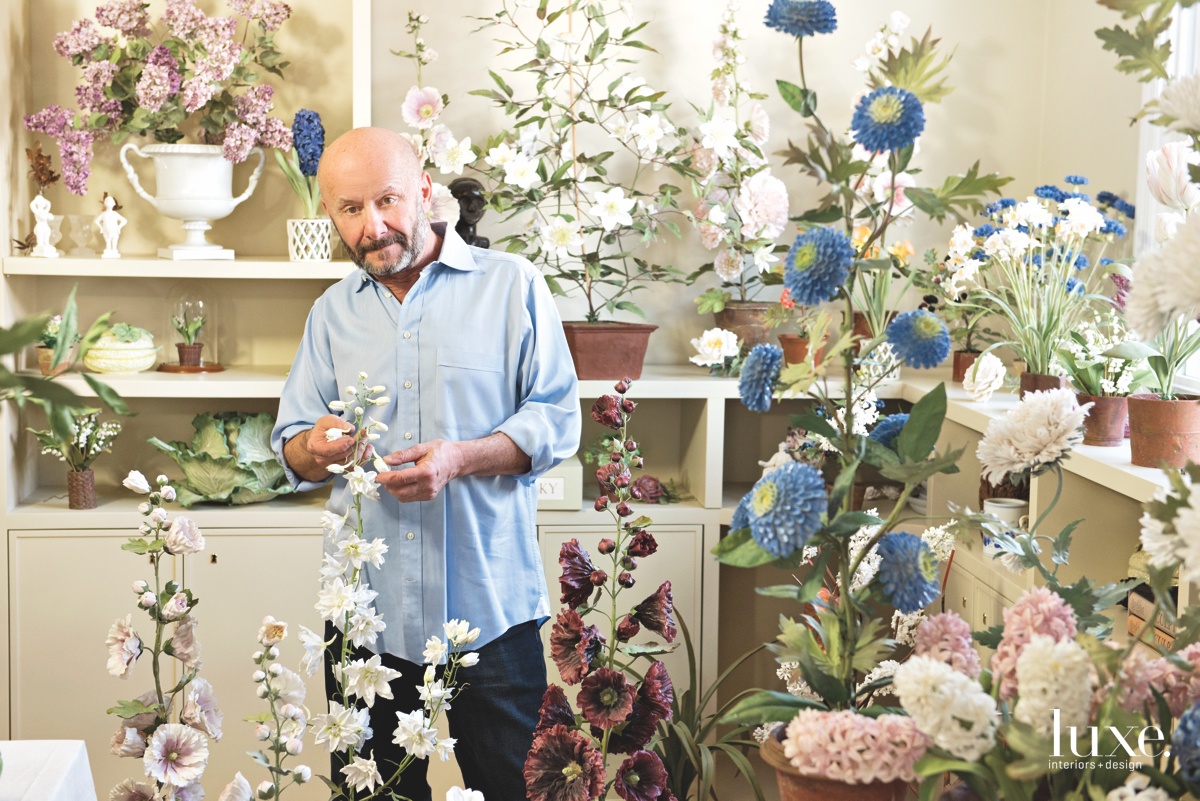 Looking at artist Vladimir Kanevsky‘s intricate porcelain flowers, it’s hard to imagine that he once secreted them away out of sheer embarrassment. “I worried they were too kitschy, so I hid them,” says the New Jersey local. “My passion had always been figurative sculpture, and I made the flowers just to pay the rent.”

Today, Kanevsky’s botanical sculptures fetch quite a bit more than rent money, and they’ve become both a point of pride and a full-time passion for the artist. But it’s been a long road. Born in Kharkov, Ukraine, and formally trained as an architect in the U.S.S.R., Kanevsky emigrated to the United States in 1989. With only a couple hundred dollars in his pocket and no job prospects, he answered an advertisement from decorator Howard Slatkin looking for a ceramic artist. Kanevsky had minimal experience, barely spoke English and was nearly 40 years old at the time–and he had one month to learn porcelain making. 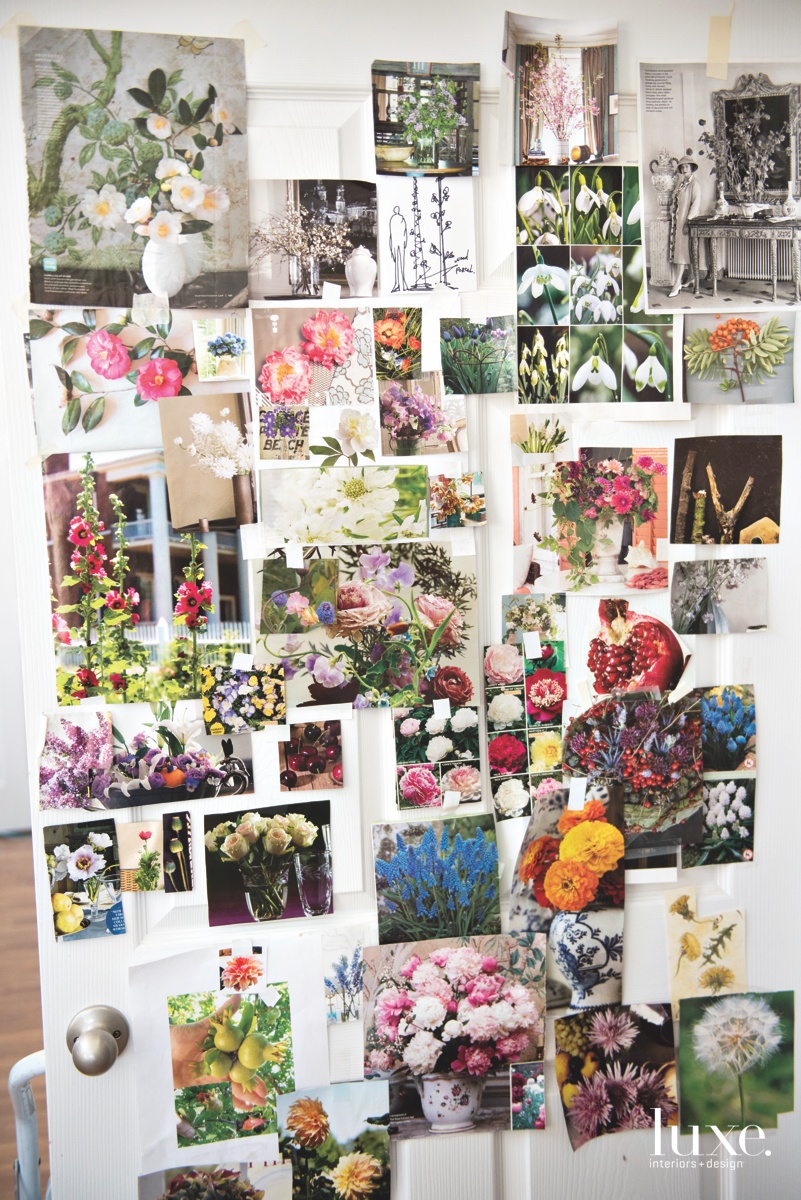 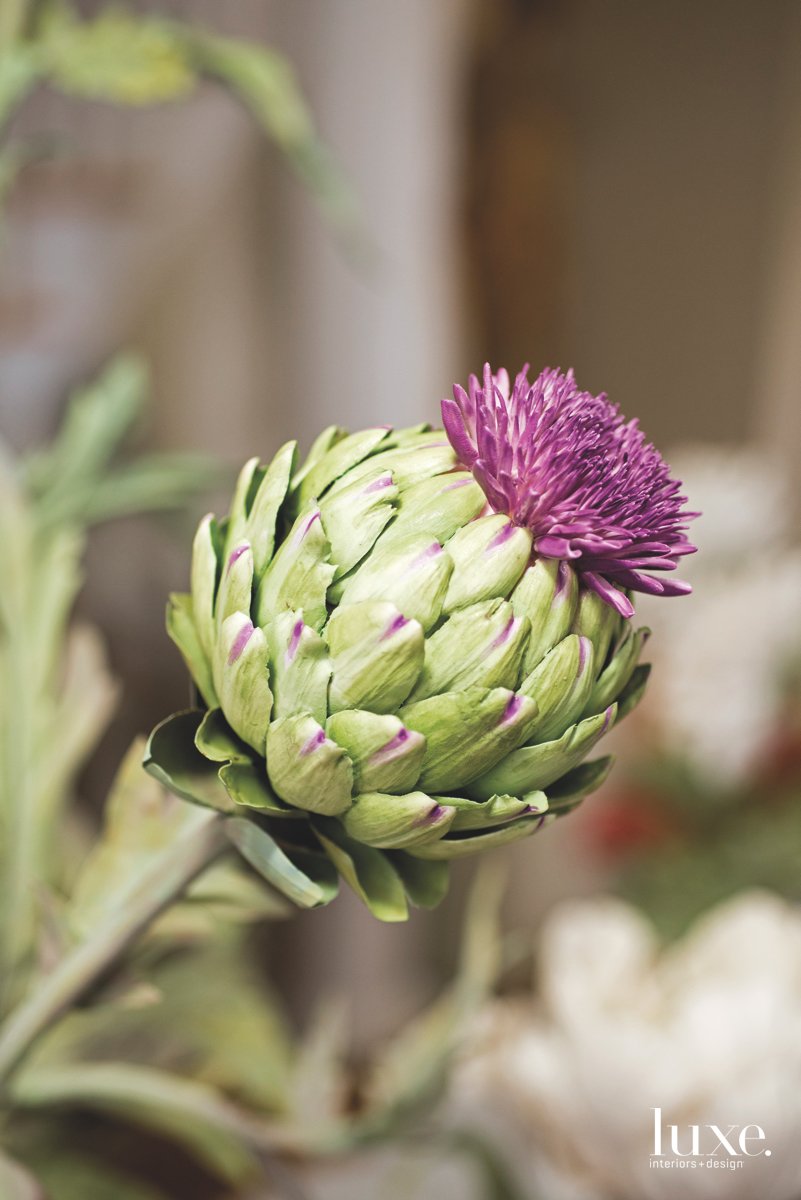 The seeds of inspiration bloom from images tacked up in Kanevsky's studio.

The seeds of inspiration bloom from images tacked up in Kanevsky's studio. 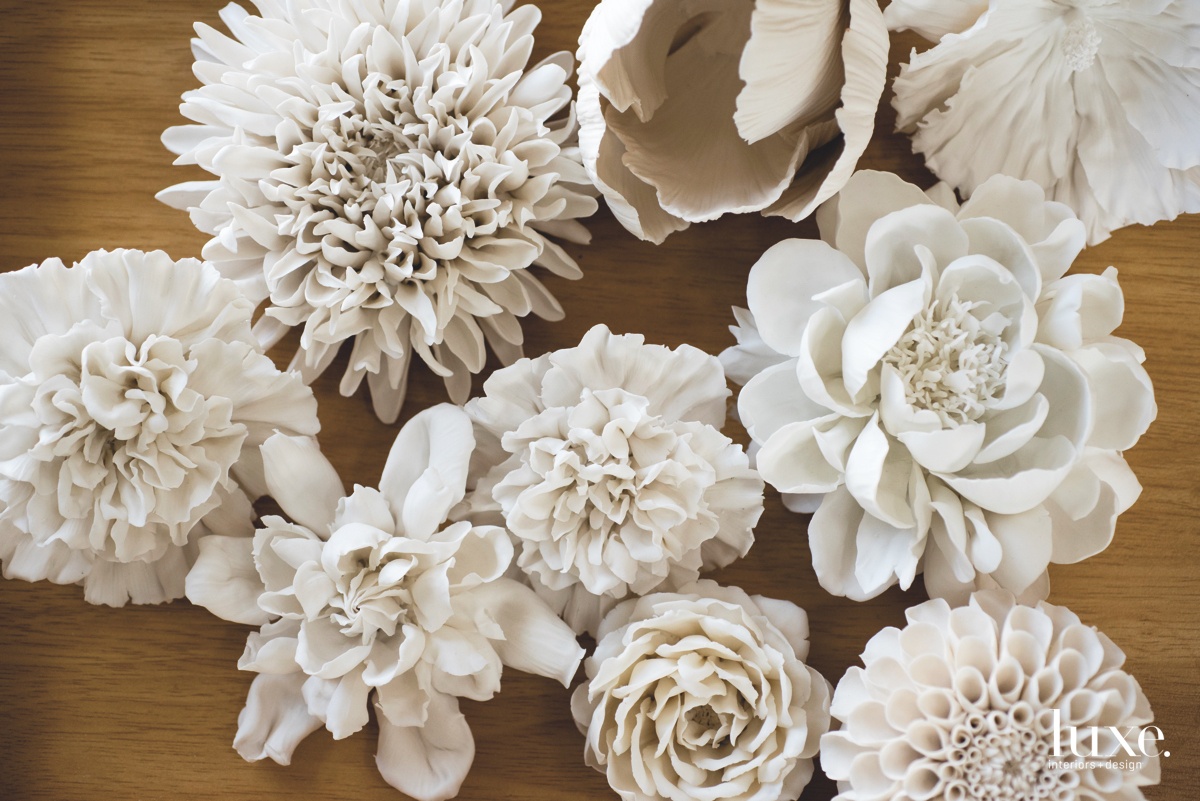 An artichoke flower is an exercise in color and texture.

An artichoke flower is an exercise in color and texture. 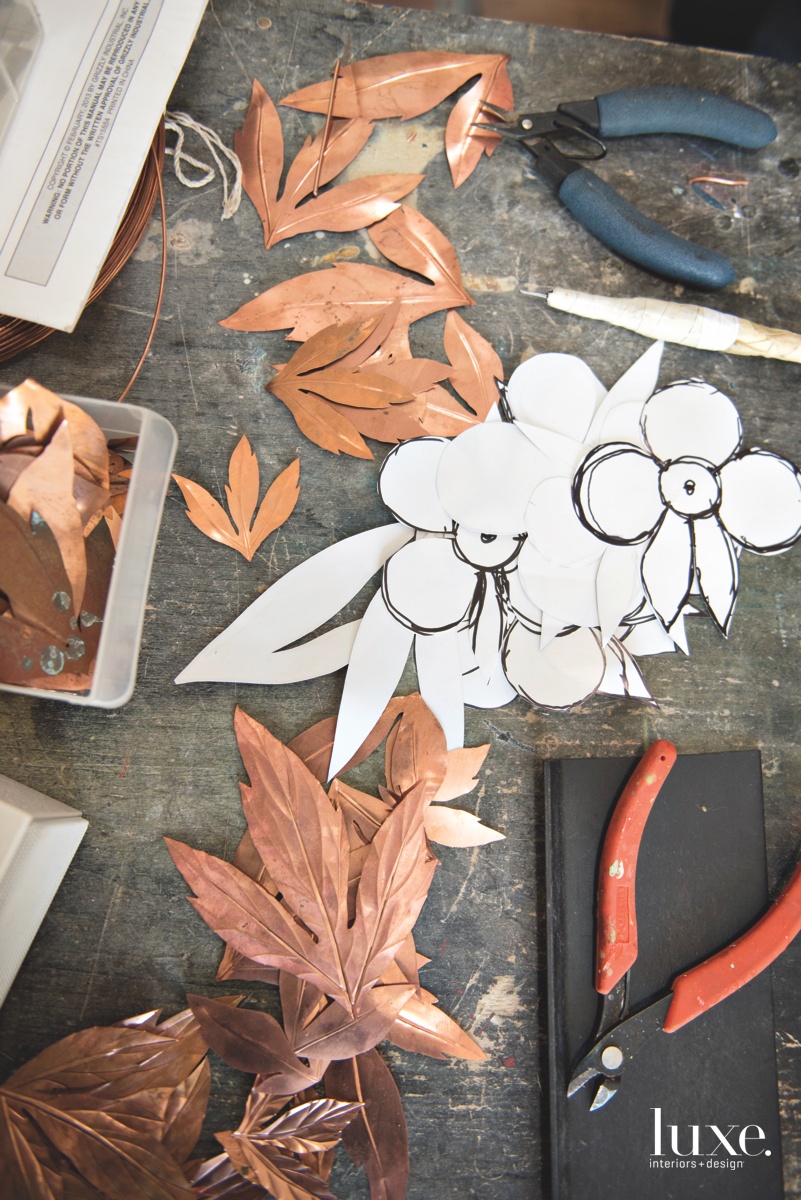 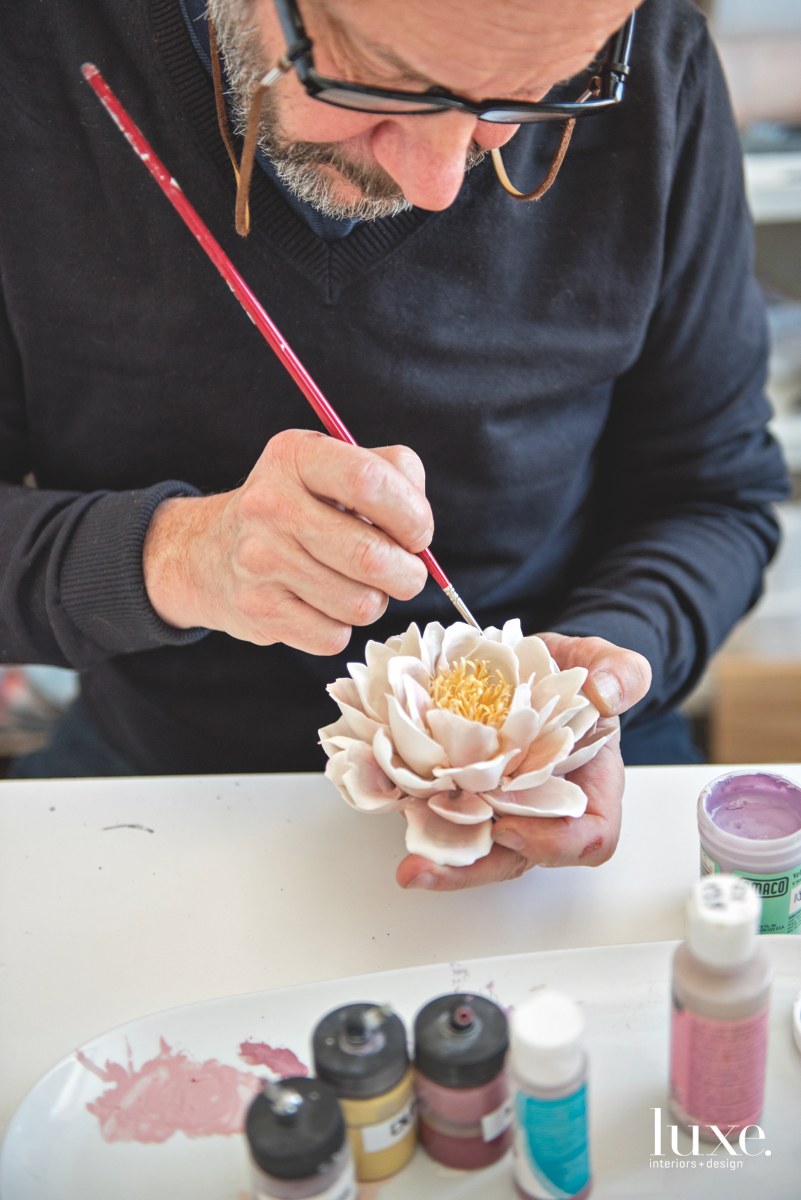 Paper patterns are used to make the pieces' metal leaves.

Paper patterns are used to make the pieces' metal leaves. 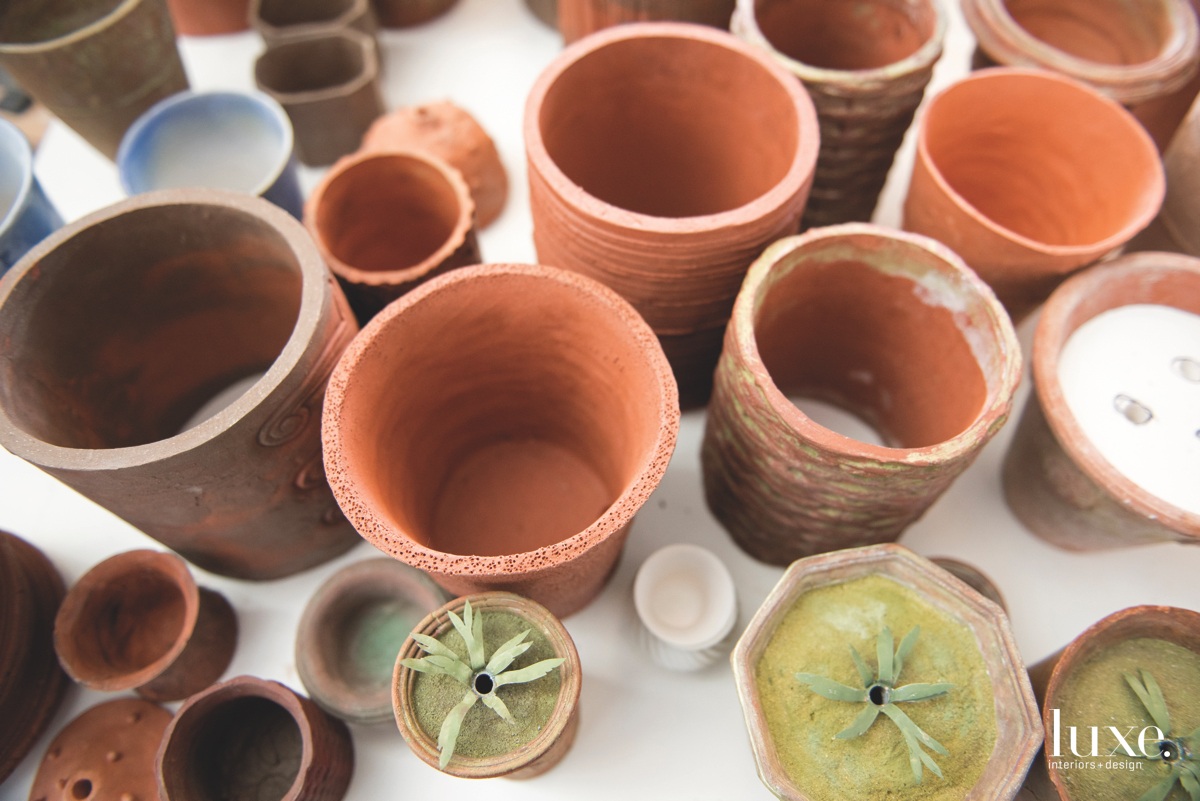 New Jersey sculptor Vladimir Kanevsky paints the petals of one of his porcelain peonies.

New Jersey sculptor Vladimir Kanevsky paints the petals of one of his porcelain peonies. 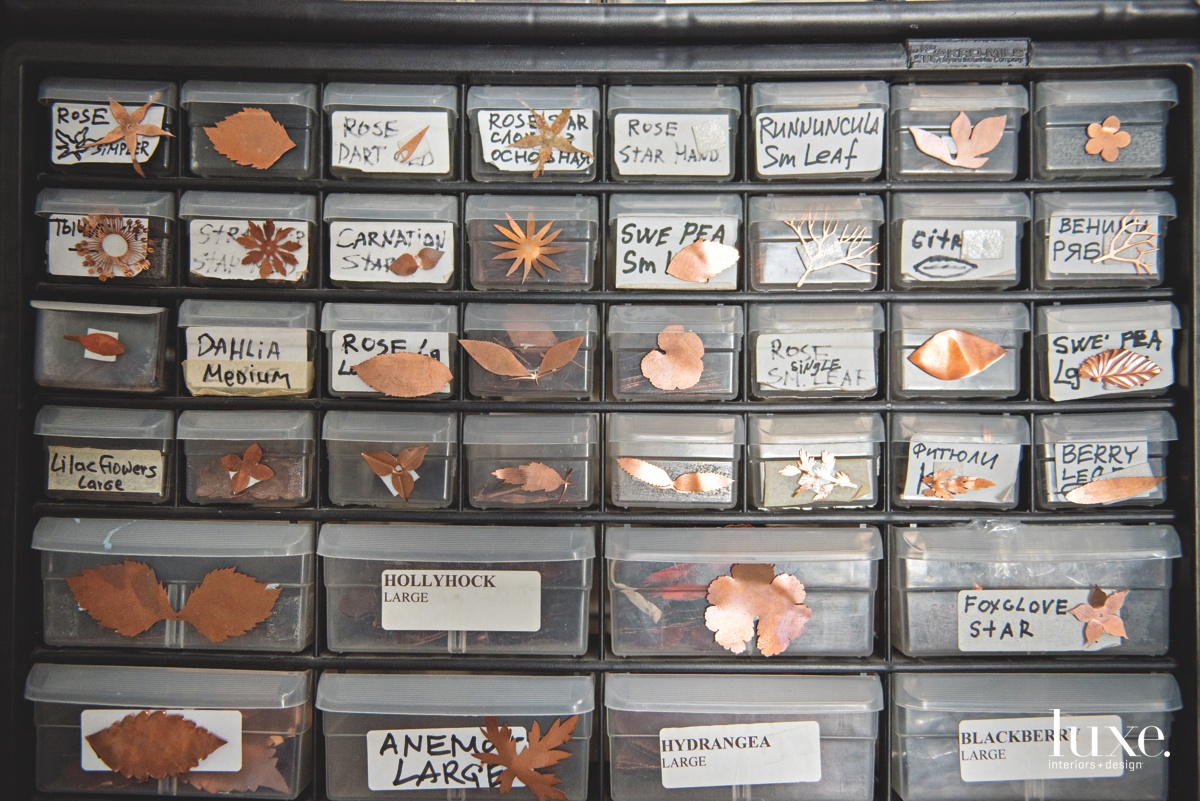 Each new sculpture created by Kanevsky begins with the vessel selection.

Each new sculpture created by Kanevsky begins with the vessel selection. 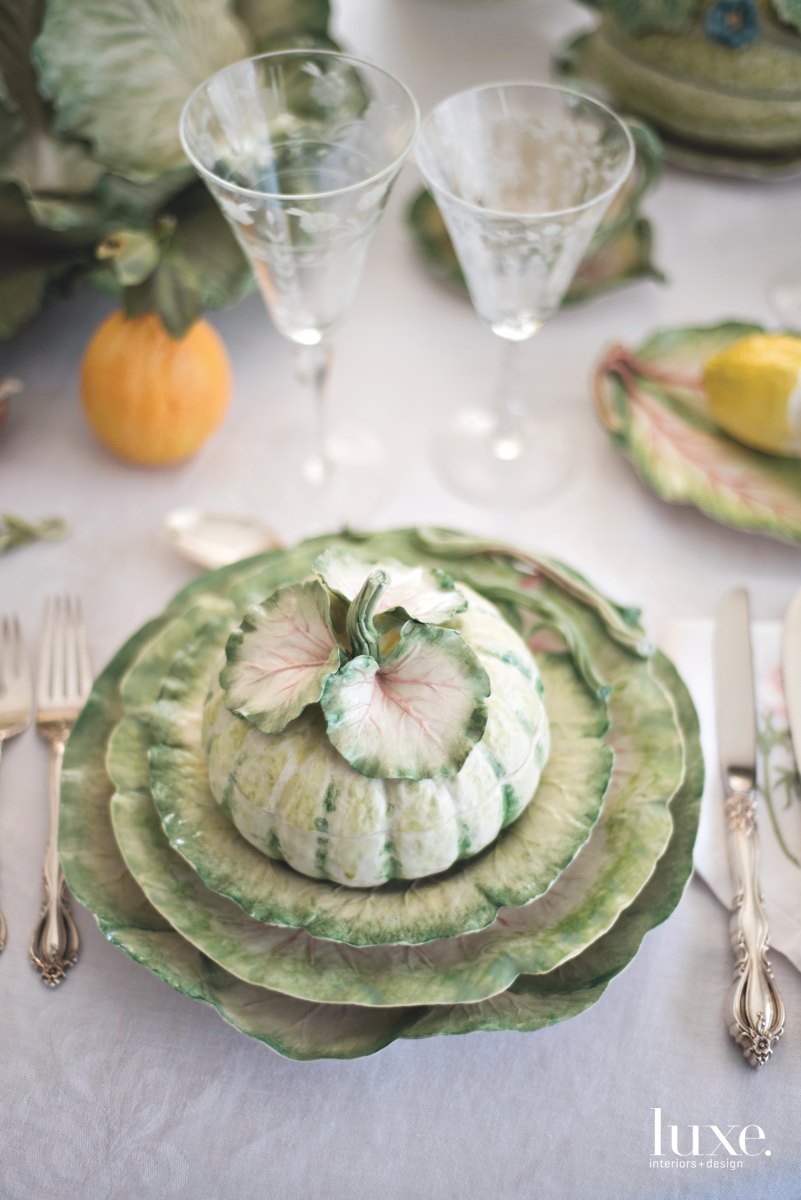 Copper foliage is labeled and stored away for future use.

Copper foliage is labeled and stored away for future use. 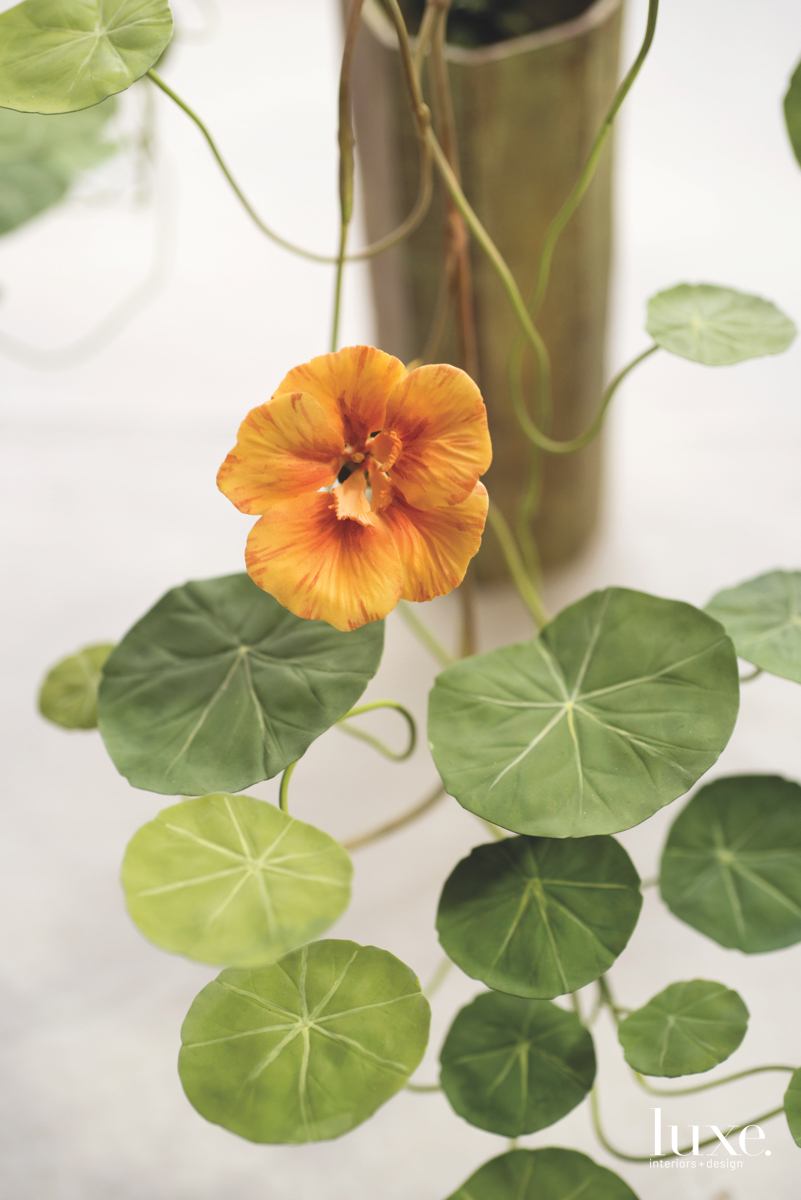 The artist's exquisite table settings, such as this one, are highly collectible among the society set.

The artist's exquisite table settings, such as this one, are highly collectible among the society set. 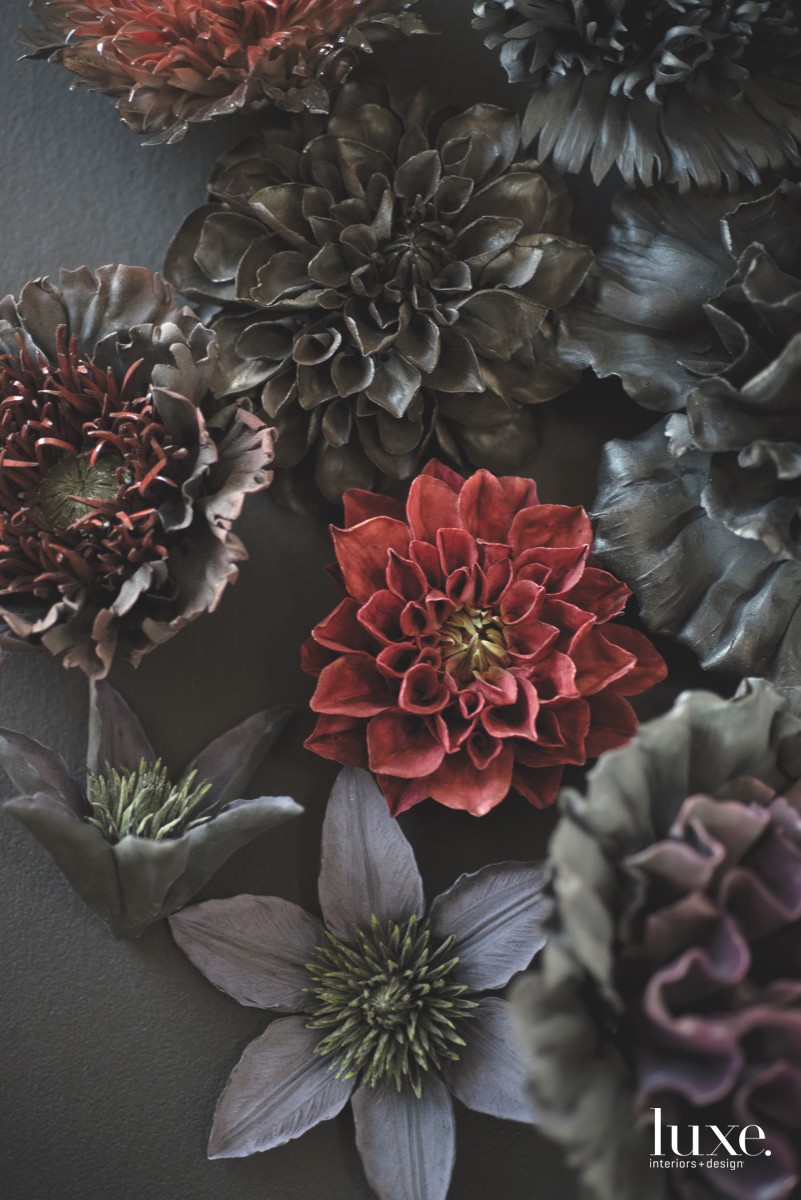 With its delicately fluted petals, a realistic orange bloom tops off a lifelike climbing Nasturtium vine.

With its delicately fluted petals, a realistic orange bloom tops off a lifelike climbing Nasturtium vine.

Kanevsky’s creations were snatched up immediately. Enchanting and lifelike, the flowers caused a sensation among some of the city’s most well-heeled designers and tastemakers, including Charlotte Moss, Oscar de la Renta and Carolyne Roehm. Despite his success, however, he only came to think of the flowers as having serious artistic merit about eight years ago. “I realized that what I was doing was similar to making architecture or sculpture,” he says. “It’s the same mix of technology, structure, scale, history, science and art.”

Not surprisingly, Kanevsky’s process begins in nature. “I love plants; I like to analyze their structure and anatomy,” he says. He studies and photographs specimens, often from his own garden, and dissects them. He then scans the parts into his computer, where he has a huge database of flowers and old botanical drawings. Although, he acknowledges, “when you sculpt, sketches mean nothing until you touch clay, stone or metal and your hands feel the material. Porcelain is fragile and can break easily. Sadly, many flowers die in the kiln.” But it’s challenges such as those that excite Kanevsky. Once, when making a lilac, where every branch is heavy with flowers, a large branch snapped and collapsed. “I had to cut out the lower part and weld a new one,” he says. “It’s all engineering intuition; the same science, same principles.”

Kanevsky works out of a small studio in his home, which he shares with his wife and business partner, Edita, in Fort Lee. There are six kilns, ranging from small to large, and a team of three assistants. Each flower is painstakingly crafted and hand-painted, then put away to be employed in a botanical sculpture at a later date. Just like a florist walks into the cooler to select blooms to make an arrangement, so does Kanevsky handpick individual porcelain flowers to make one of his creations, many of which will be on display in an upcoming exhibit at The State Hermitage Museum in St. Petersburg, Russia.

Being surrounded by such exquisite handiwork, though, makes it hard sometimes to part with a piece. “Occasionally I finish one and don’t want to sell it,” Kanevsky says. “I fall in love and want to keep it, which often leads to a conflict with my wife, who is less sentimental. But when I feel that affection is gone, that’s when I sell it.”