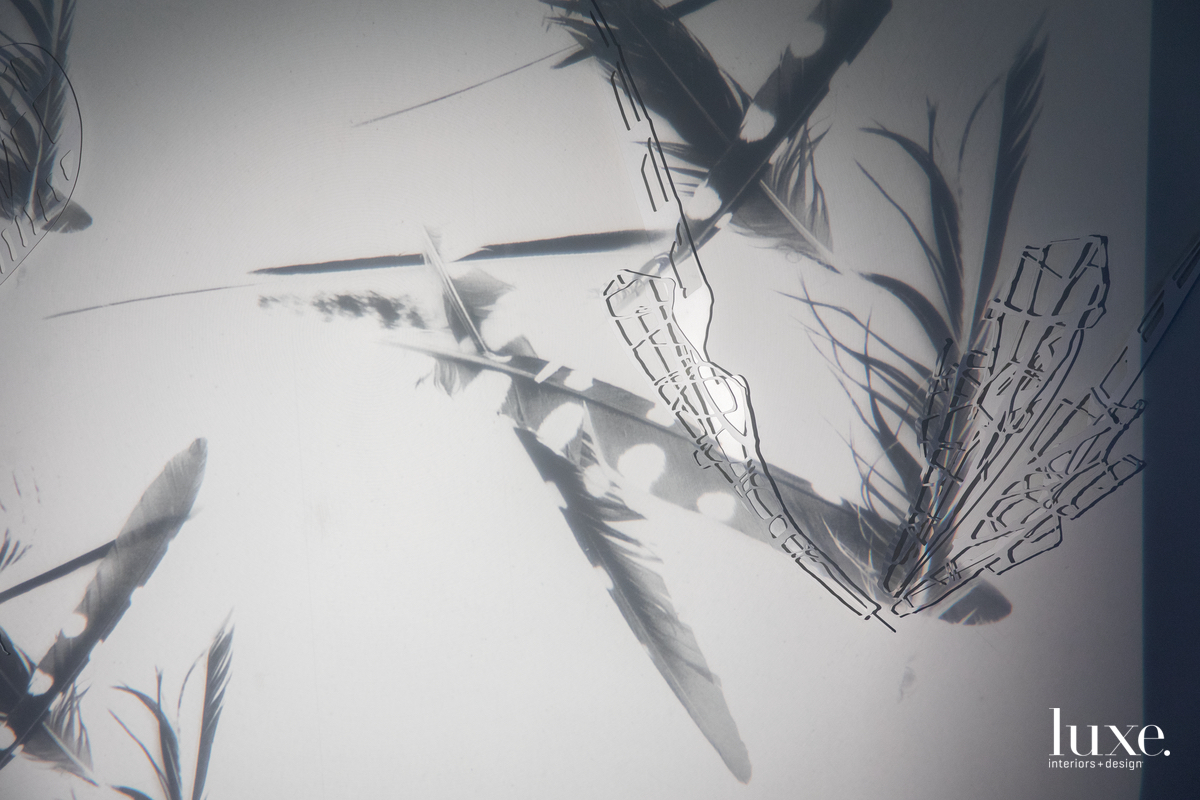 Whether it’s a multitude of tiny photographs of insect wings arranged in a swarm or gleaming skeletal sculptures of wings meticulously crafted by hand, Alan Bur Johnson’s unconventional sculptures speak to his fascination with the world around him–and to its innate fragility.

Johnson’s creations spring from sources both natural and manmade. For his insect installations, for instance, he photographs cicadas, dragonflys, glassy-winged moths and more, all native to Arizona. Additionally, model airplane wings, which his architect/artist father designed and built as a hobby, have become a growing influence. “The wings my father created were architectural, geometric and linear,” says Johnson. “The insect wings I photograph are organic, with free-form angles and functional irregularity.” He’s begun to work both kinds into his Push the Sky series, lending him a language to address the different paths he and his father took in art and in life. 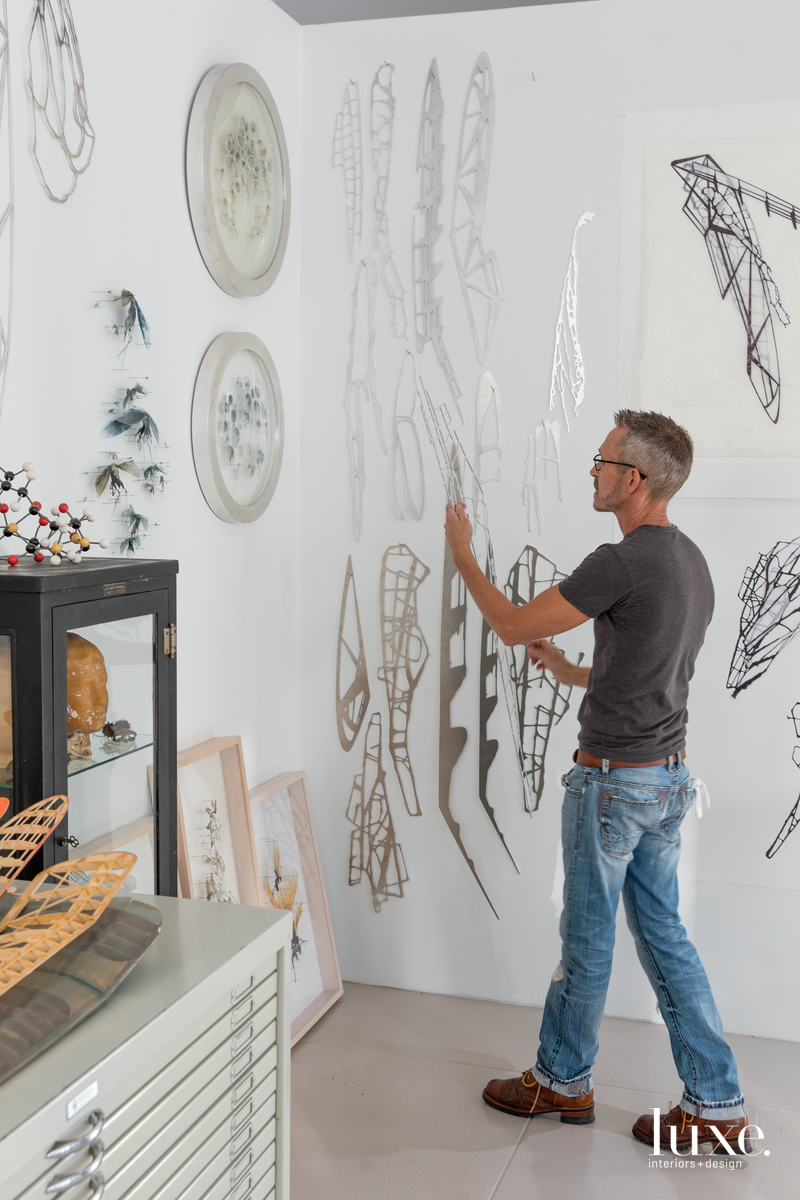 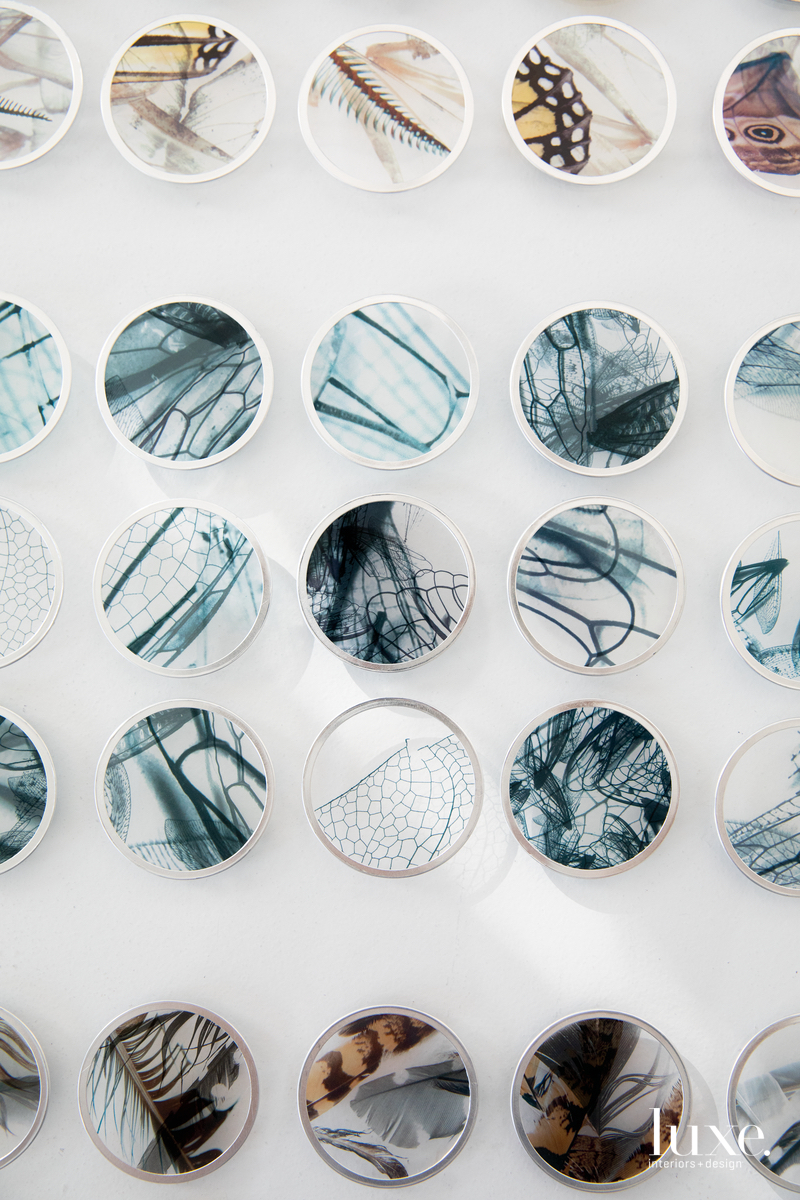 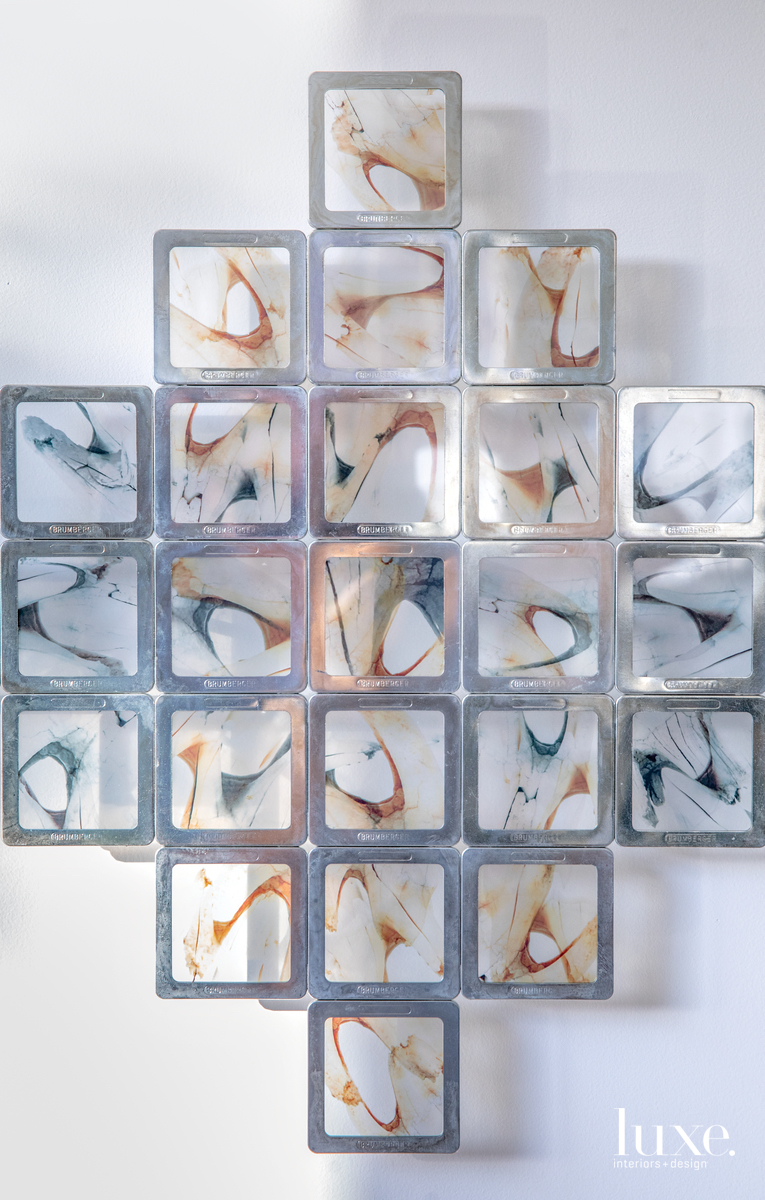 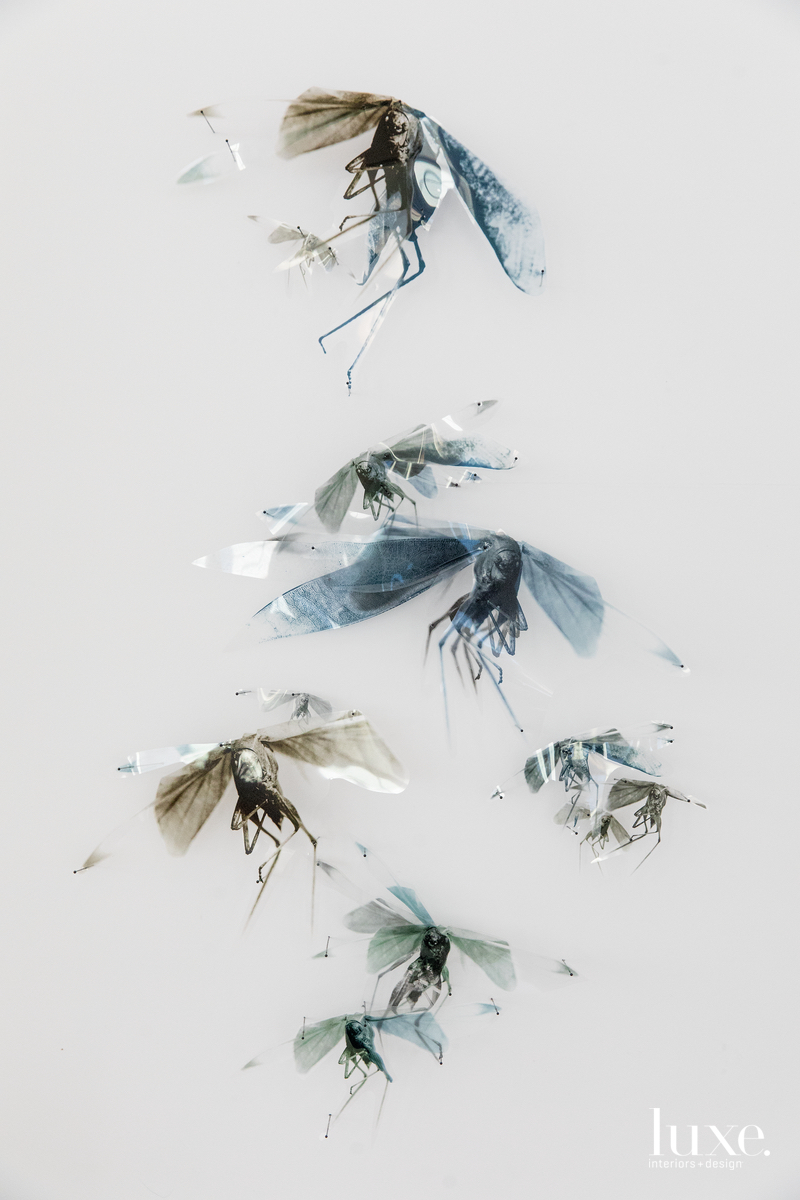 For his Progeny series, he hand-cut photographs of locusts and mounted them with insect pins.

For his Progeny series, he hand-cut photographs of locusts and mounted them with insect pins. 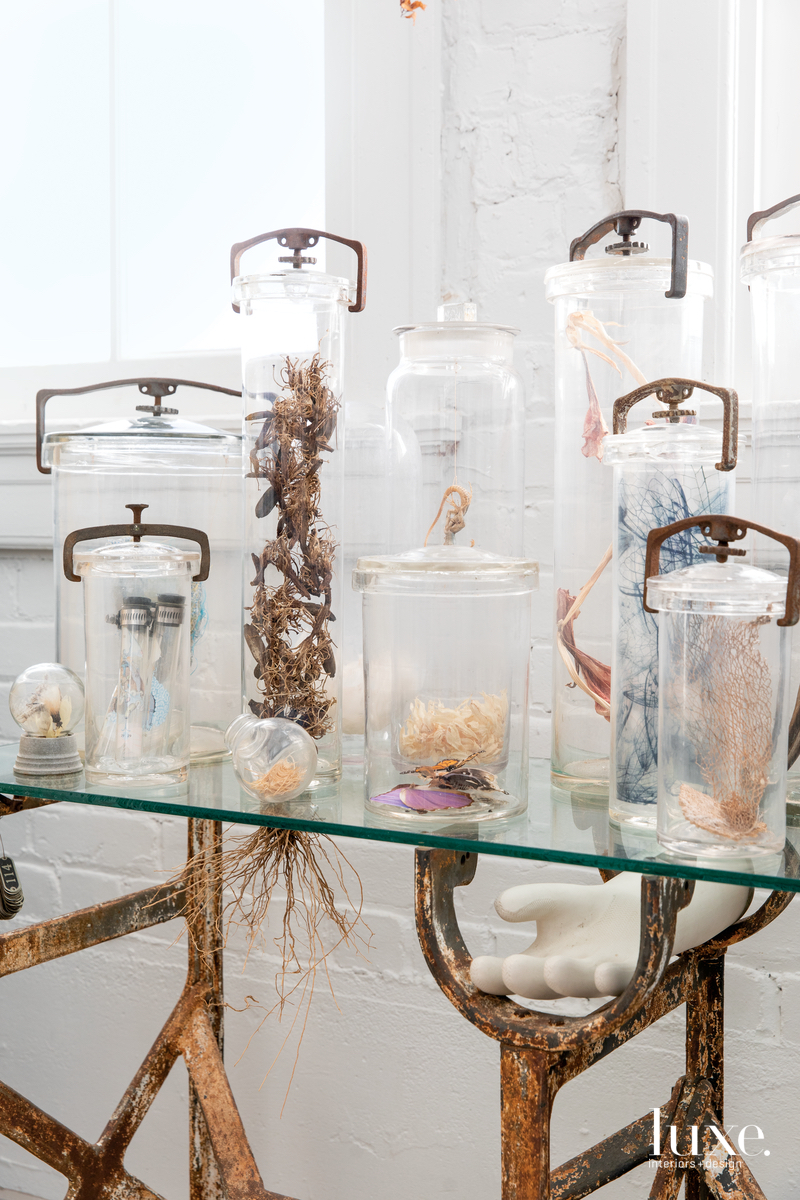 Late-19th-century specimen jars will be used for future work.

Late-19th-century specimen jars will be used for future work. 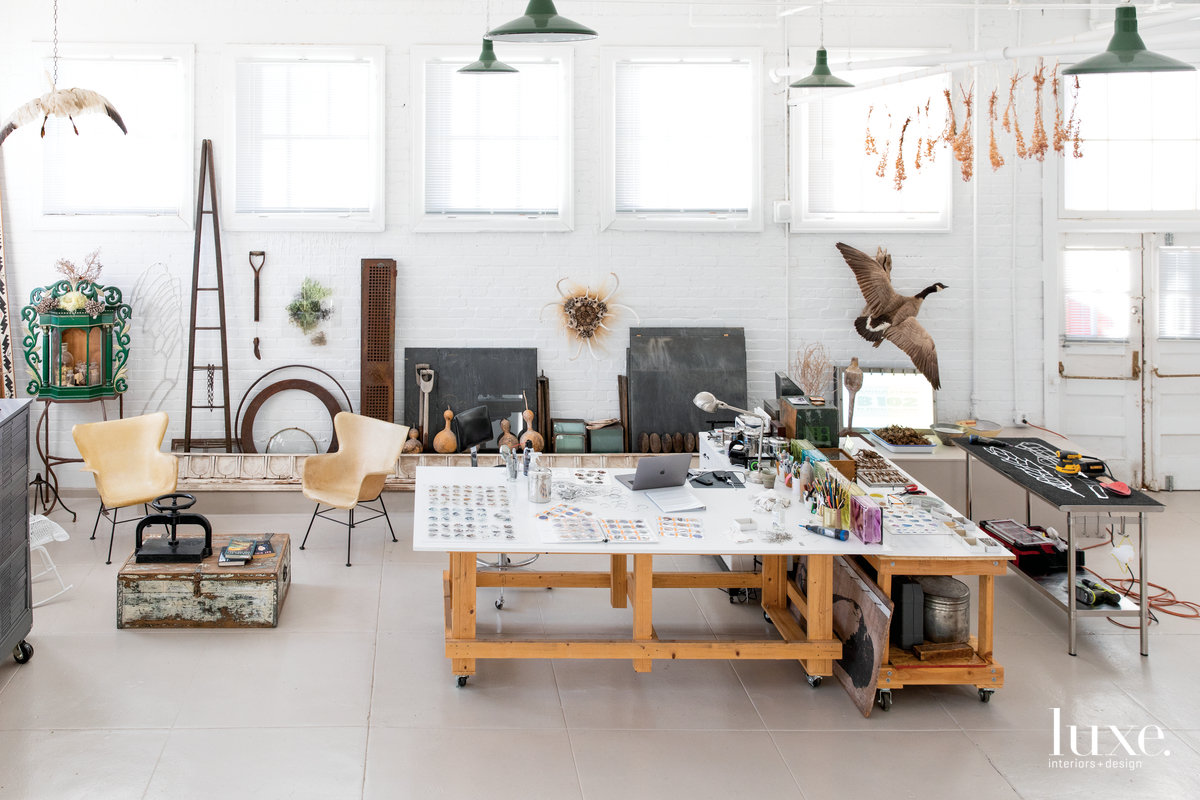 A large work table is the centerpiece of Johnson's light-filled studio, which he furnished with a pair of midcentury fiberglass chairs and a 19th-century nicho from New Mexico.

A large work table is the centerpiece of Johnson's light-filled studio, which he furnished with a pair of midcentury fiberglass chairs and a 19th-century nicho from New Mexico. 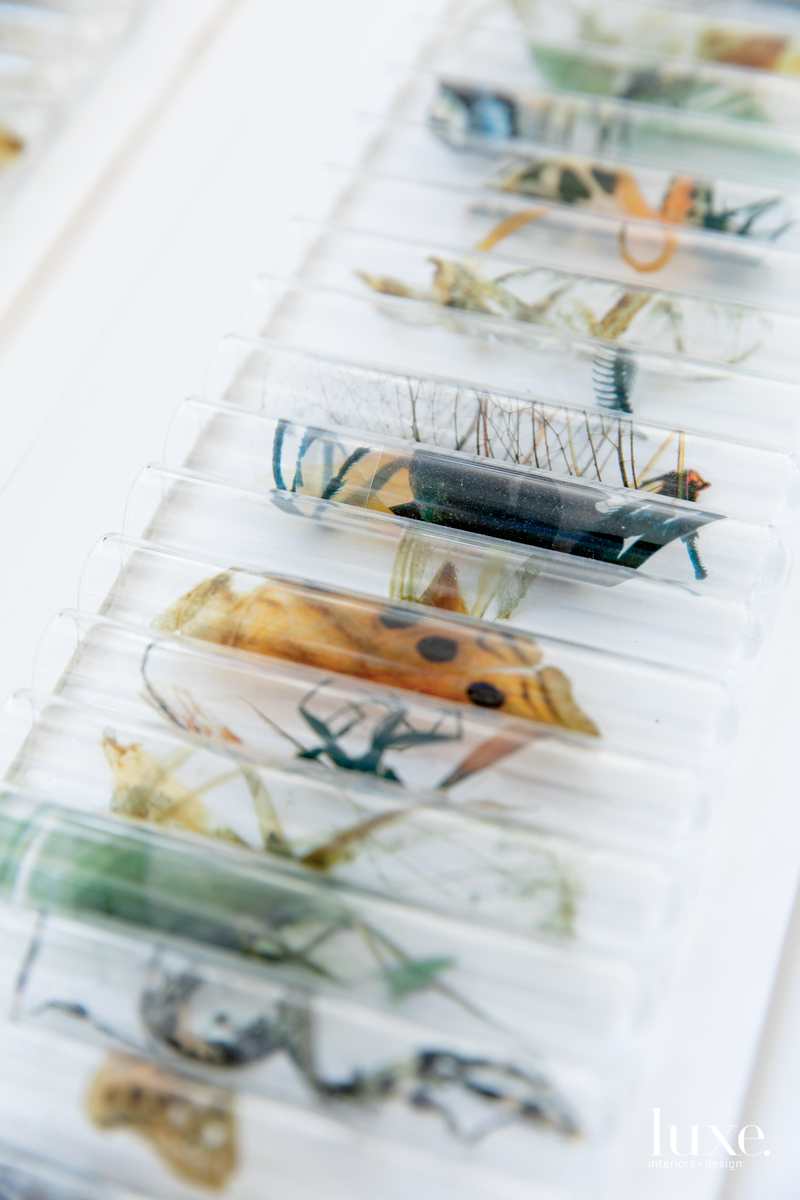 Test tubes with images of specimens native to Jerome will eventually be installed en masse.

Test tubes with images of specimens native to Jerome will eventually be installed en masse.

For the series, the Arizona artist works in aluminum, which is light enough to be easily mounted, allowing his installations to virtually float, catching the light, casting shadows and transforming into life forces all their own. His process involves multiple steps: sketching, photography, projection, re-drawing and form cutting. “I suspend the skeletal frameworks my father built and draw the long shadows that are cast upon the wall, then redraw and reduce the forms,” the artist explains. “I do the same with projections of insect wings I’ve photographed.” Each drawing is reproduced in aluminum with a minimal surface finish and sanded to lend the wings a soft, malleable touch. Finally, they’re wall-mounted so that the shadows and voids take on significance. Or, on a dark wall, the forms take precedence. “Both speak directly to the absence and presence of my father and our shared fascination with levity, structure and flight,” says Johnson, who is represented by Lisa Sette Gallery.

The artist’s experimentations take place in his expansive studio in Jerome, a boomtown gone bust in the 1950s that’s found a second life as a tourist destination due to its vineyards and burgeoning creative community. “The old high school is all artist studios,” he says. “I have the old wood shop.” The 2,500 square-foot space allows him to spread out his many materials on the floor and project, from a distance, his imagery on the walls. When clients visit, the studio doubles as an informal exhibition space. “Seeing this kind of work in person is, I feel, a necessity,” he says. “It’s hard to understand the depth and the scale any other way.”

With his unbounded curiosity, new terrain is always calling. “I try to remain pretty open with my process,” he says, “to let the materials take me where I ultimately need to be.” Johnson intends to make wings from Douglas fir, which has special meaning for him having been raised in rural Washington. “My formative years were spent walking through the woods looking upward to the sky through towering Douglas firs,” he recalls of his summers on the shores of Clear Lake, an area nestled in the foothills of the Cascade Range. “For me, there has to be a conceptual motivation,” he says. “I’m not just going to make a decoration. I’m a bit of a purist that way.”