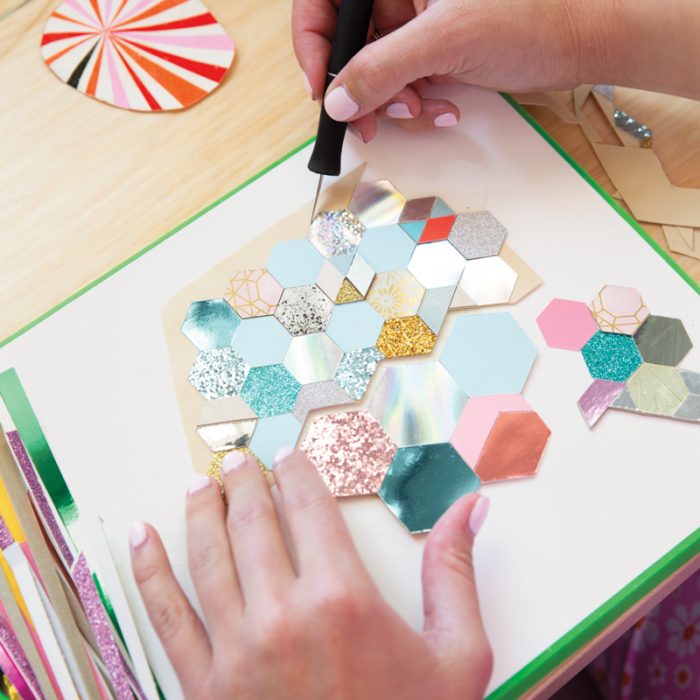 During summers, my dad drove our family across the country in our van to visit Disney theme parks,” says San Antonio artist Kelly O’Connor. “These memories are such a source of joy for me.”

While many children make the same pilgrimage, few develop a lifelong fascination–but for O’Connor, the trips proved integral to her career. “I try to reveal the realities behind the facade,” says the artist, whose body of work spans more than a decade and includes both collages and site-specific installations. “My art explores the deeper and sometimes darker meaning behind America’s utopian places and fairytales, which I never questioned while growing up.”

Her mother also played an early role, exposing O’Connor to hobbies–like quilting–that sparked her interest in collage. But it wasn’t until becoming a visual arts student at San Antonio College and later The University of Texas at Austin that she found her creative voice.

“Professors encouraged me to study the theory behind the narratives and landscapes I remembered and loved from those childhood vacations,” she says. So, her earliest works focused on Disney–including her “Worn by the Sun” installation, which featured a larger-than-life mural of Alice to question author Lewis Carroll’s fascination with the real-life girl who inspired his main character. 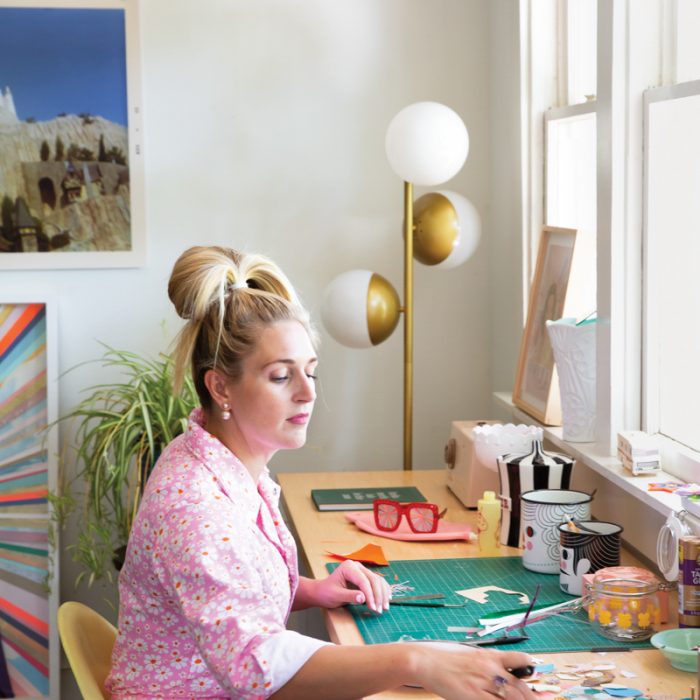 Artist Kelly O'Connor in her studio.

Artist Kelly O'Connor in her studio. 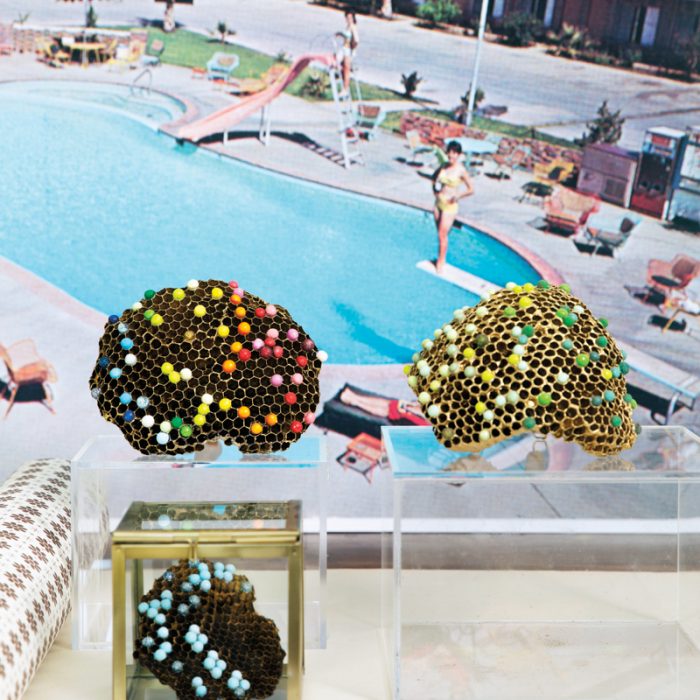 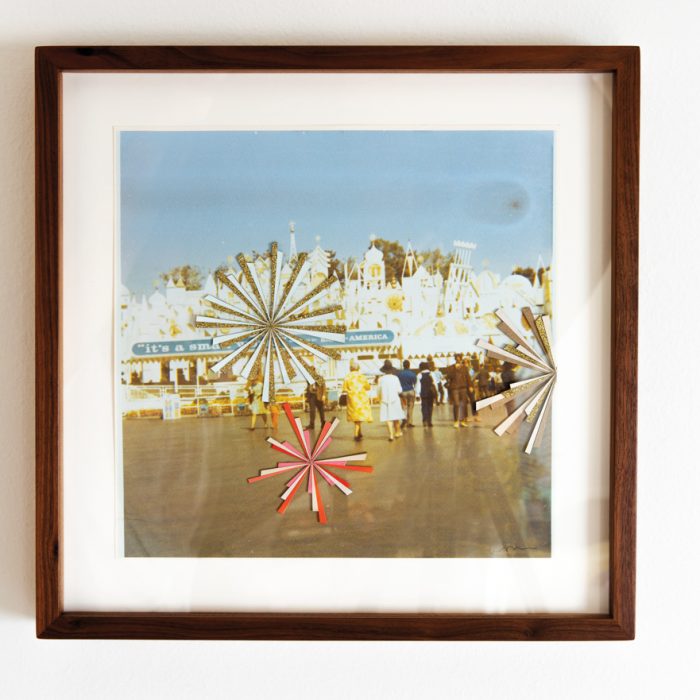 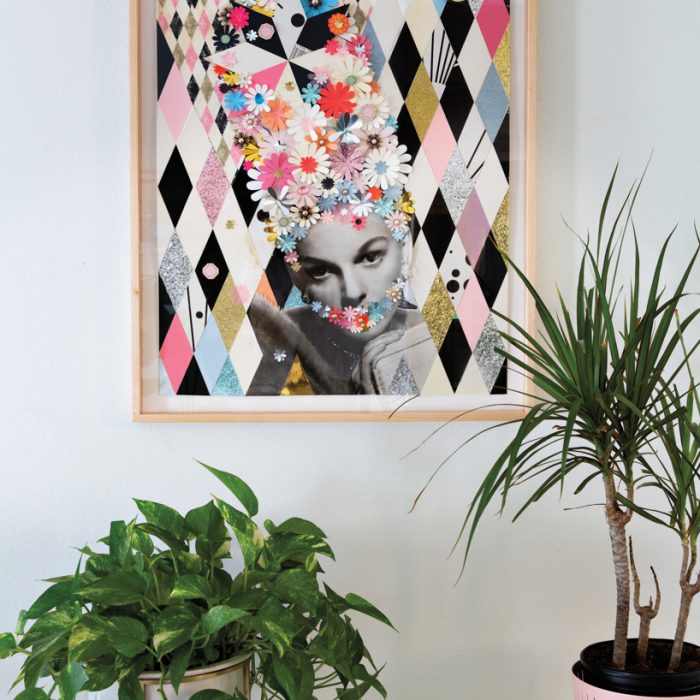 Her focus eventually shifted to the duality of Hollywood glamour and starlets like Judy Garland, whose fame masked a tormented personal life. In a collage entitled Died to Match, for instance, O’Connor depicts The Wizard of Oz scene in Emerald City when Dorothy asks if her eyes can be dyed to match her gown–a notion “both artificial and horrifying,” the artist notes. Surrounding Dorothy in this collage, disillusioning images of common household goods like Ajax scrubbing powder and Joy detergent, which O’Connor clipped from vintage Life magazines, allude to the facade.

As another metaphor for these dualities, O’Connor’s collages often employ hexagons arranged into “a hypnotic void-like pattern symbolizing being taken on a psychological ride,” she explains, “much like prescribed drugs that create an artificial sense of reality.”

Appropriately, the geometric motif covers sunglasses worn by models in her “Valley of the Dolls” collage series. It also appears more naturally in the form of sinister wasp nests O’Connor painted a glamorous gold for her Oz/Odessa installation, exhibited in a former 1800s jail cell and meant to juxtapose the idea of fantasy with the west Texas oil town her mom once called home.

Paper harvested from vintage record covers also frequents O’Connor’s collage work, though vintage postcards and even glitter paper also suffice. O’Connor forms her paper shapes with an X-Acto knife before collaging them using an inlay technique she developed during a post-college studio assistantship with renowned Texas artist and collector Linda Pace. “She gave me free rein to execute a mirrored igloo sculpture inspired by a dream she had,” says O’Connor, “which required cutting and assembling thousands of acrylic pieces.”

Now the Linda Pace Foundation’s head of collections and communications–and with an upcoming solo show at David Shelton Gallery and work displayed in private and institutional collections nationwide–O’Connor is turning her own dreams into reality.